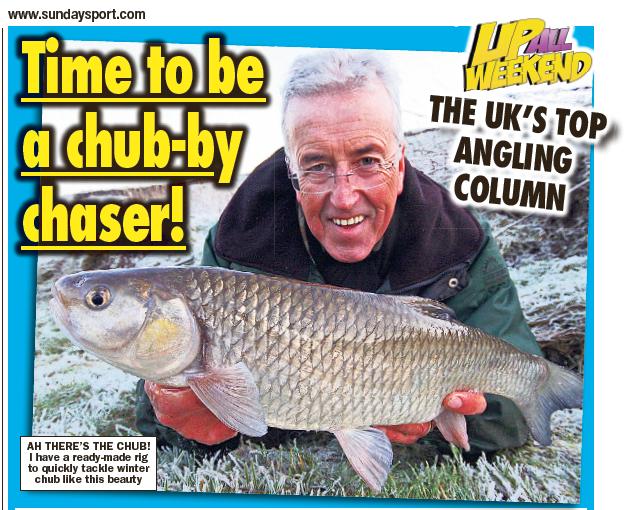 It’s Time To Get Organised

Happy new year folks! Anyone been wetting a line? Thought not. Just prior to Christmas the UK took a bit of a battering from gale force winds and high river levels, hardly the kind of weather to tempt sane anglers out onto the riverbanks. Sadly this is only the beginning. We all know, deep in our hearts, that the worst of winter still lies ahead of us. Rarely does a British winter fail to deliver its share of snow and freeze-ups during January and February. Yes, if nothing else transport chaos lies ahead so it’s a double whammy for the angler.

I’m sorry if this all sounds a little depressing but there’s a reason I’m making this point. There are only nine weekends left before the river season draws to a close and some of those will be washouts. The clock is ticking. The countdown has begun and it’s time to begin some serious planning if you want to make the most of what time remains.

I tend to limit my target species in the colder months to predators, that’s pike, perch and zander, plus chub and grayling. Anything else that comes along is a bonus. Barbel will feed if the temperatures suddenly rise and there’s a little colour in the water but it’s a pretty long shot before the last two weeks of the season. Bream? Why bother when they are easier to catch in summer. As for roach and dace, they now suffer from limited distribution. The days when I could rock up to the Trent or anywhere else and catch a net of silver fish in winter are distant memories but I still dream of a recovery.

My favourite fish of the winter is probably chub. The tackle is simple. Nine times out of ten I’ll be using one rod, a quivertip. The reel will be loaded with 5lb line ending in a cage feeder or light leger weight. This rod is never broken down. The line is permanently threaded through the rings in anticipation. All the accessories, a few hooks and hook links, scissors, disgorger, forceps, bread punches, spare feeders and legers wait patiently in a 3 pint bait box, ready to be picked up at a moment’s notice.

I keep a ball of cheese paste on standby in the freezer and it takes two minutes to liquidise a loaf of bread to use as feed. Chub fishing can be done at the drop of a hat and the gear I need has a reserved area in my garage.

Next to this I store my pike and zander gear. I can get by with one pair of rods, These are made up minus the wire trace which clips straight onto the swivel at the end of the line. For bait I’m happy to rely on deadbaits. You’ll find smelt, lamprey, sardines and roach in my freezer, individually wrapped in cling film. There’s nothing worse than finding a frozen block of baits that you cannot prize apart. Predator fishing requires a bigger landing net. This is propped up next to the rods.

Perch fishing probably demands more gear than any other target. I might need a float rod to present lobworms or prawns if conditions suggest they could chase a moving bait. A feeder rod to present a static bait and the new ‘in’ method, drop shotting requires a special rod of its own. Rarely will I set off to fish all three methods in one day. Winter days are far too short. If I’m drop shotting then that’s all I will do, so I grab a 7-foot dropshot rod along with a few worms and a small box of plastic lures, spare hooks and weights.

If it’s a worm day then the chub rod doubles up so I’m not having to make up a special rod. It’s already there waiting for me. The float rod is the only one I don’t have set up ready to go because These tend to be 3-piece rods and are more prone to tangling so I’ll rig up a rod on the bank when a float fishing opportunity arises.

That then leads me on to a winter favourite, the grayling. Grayling will feed in the coldest temperatures. Days when your fingers turn blue, when you have rosy cheeks and a red nose. Days so cold that little else will feed are grayling days and I’ll fish with light float tackle, keeping on the move, 20 minutes maximum in each swim, more to keep the circulation going than anything. The delicacy of the tackle dictates I only set up a grayling rod at the last minute, usually on the river bank but sometimes at home before I set off. Because I will use maggots as feed I have to make a special trip to the tackle shop. Grayling fishing isn’t something I do at the drop of a hat so there’s plenty of time to get ready.

Now you may be wondering why I don’t make up all the rods on the day before fishing. Well, winter fishing isn’t something you plan too far in advance. The weather dictates what you fish for and how. As we’re all well aware the weather is unpredictable and changes rapidly. How often do you see the weather man or girl telling us that there’s a front heading our way, that we’re heading for Arctic temperatures, a deluge of rain, snow, ice, hurricanes even, and it fizzles out to nothing? All the time, yet whenever we do get bad weather you can guarantee some attention seeking MP will be on the box asking why we weren’t given more warning!

No, it’s much safer to plan winter trips no more than 24 hours ahead and still be prepared to change them on the morning if necessary. It’s dead easy if you get your tackle organised like I do. Just make sure you have the appropriate clothing, hot drinks and a snow shovel in the boot of the car, just in case.

Surrounded by trees and shrubs this pretty and secluded reservoir has a wooden walkway leading to 122 jetty-style pegs, with a further 10 pegs along the dam wall. Known best as a prolific summer match water with a huge head of carp, the winter angler is able to target quality roach, bream and pike. It lies approximately 5 miles north of Banbury (nearest postcode OX17 1DR).

Day tickets for one rod cost £6.