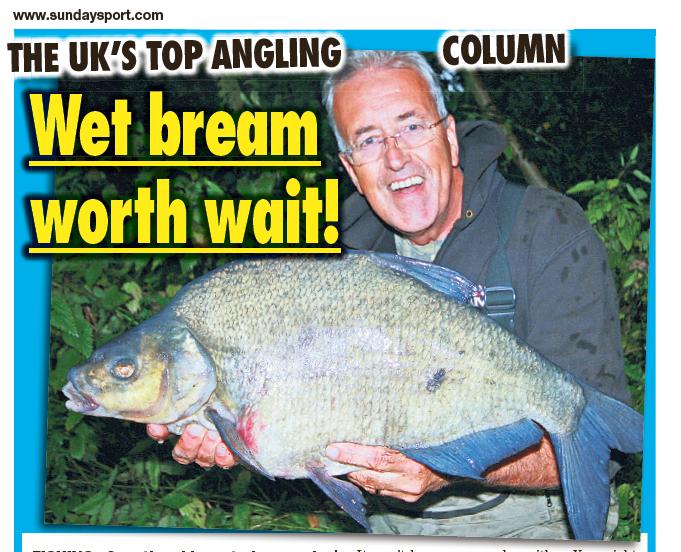 Fishing for the biggest bream is patience personified. For most anglers life is simply too short to even contemplate catching a really large specimen. The unfortunate truth is more big bream are caught by accident than by design. They mainly fall to carp anglers who get quite upset that their carefully laid traps have been sprung by a great big useless lump of a slimy bream!

No, genuinely setting your sights on a big ‘slab’ requires a degree of dedication seldom required by any other species. They tend to grow biggest in large waters where their numbers are low so it becomes a needle in a haystack job.

I recall reading a slim book by Derek Quirk many years ago simply called ‘Bream’. In it he charted the efforts of his friends in their quest for a huge bream from the then Mecca of bream fishing, Queenford Lagoon on the outskirts of Oxford, an 80 acre weedy pit that maybe held around 60 fish. Mark Chivers fished for 94 nights before he caught his first bream. The late Alan Wilson accrued over 70 nights on the same water for just one fish. That’s the kind of effort required on the toughest waters and all for a fish that fights like a wet sack.

Quirk lived 180 miles away from Queenford so his determination to take on such a tough water bordered on madness. Imagine how he felt writing this: ‘A sense of despondency was creeping in as I realised I was fast approaching 50 nights without so much as a single bream bite.’

His effort paid off eventually in the shape of a huge male fish weighing 15lb 11oz and seldom has a fish been so richly deserved.

Really big bream, and by that I mean specimens weighing over 10lbs are pretty thin on the ground, despite the rumours you will hear. Location is everything. Your first task is to find a water that contains ‘doubles’ and then you have to track them down within that water. Unfortunately they tend not to hang around in any one area for long. Bream are nomadic grazers. Huge waters might only hold one small shoal of bream and the chances are they will stay together in a group rather than be dispersed like currants in a bun, so finding them is a headache.

Observation plays a big part. At certain times of the day, usually very early in the morning or late in the evening bream might roll. It won’t be a splashy roll and they won’t leap clear of the surface. It won’t happen every day, either. You might just spot a head and shoulder, or a dorsal fin, or a flat spot in the ripple but being alert and observant when it happens is the first real clue as to their whereabouts. At least you’ll know where they are at that precise moment.

Trouble is they are likely to be somewhere else in a few hours time but one thing in your favour is that bream tend to have regular patrol routes and they will follow a similar pattern, turning up in the same place at the same time each day, providing the weather is settled. When a warm wind blows then they are likely to abandon the established patrol route and follow the wind. What the angler has to do is try to predict their movements and lay a trap ahead of them. To a degree it is guesswork but understanding their behaviour will improve your odds.

On man-made waters like gravel pits there will most likely be sunken bars left by the gravel extraction process and these frequently act like the barriers alongside a highway, directing bream along a particular path. It will help you enormously if you know the lake’s contours intimately.

In an ideal world you will predict the fish’s movements, get well ahead of them and lay down sufficient bait to grab their attention and have your baited rigs in place long before they arrive. Accuracy is paramount, obviously.

Most bream anglers rig up with a fairly heavy swimfeeder and very short hook links. Should a bream happen to pick up your hook bait the swimfeeder then acts as a bolt rig and will set the hook automatically.

Of course there’s a lot of waiting and hoping involved and for that reason I wouldn’t dream of tackling such a challenge without the very best electronic bite alarms available. The one’s I use are made by a small company called Delkim and they work on the same principle as a record player but instead of a stylus reacting to the nuances in the vinyl groove the angler’s line rests on a tiny wishbone sensor that reacts to the slightest vibration.

If a fish pulls the line forward by a few millimetres then an audible warning is given and the visual indicator bobbin lights up. Pretty space age stuff for a fish most regard as having the brains of a sheep!

If this all sounds a little mechanical then I tend to agree with you, but be in no doubt, when you do land a big bream by design your reward is a huge sense of personal achievement. That and a very slimy landing net, t-shirt and anything else your capture comes into contact with! It’s far from everyone’s cup of tea and a challenge that few have the dedication to take on. But that’s what makes fishing interesting.

It’s not about knocking a little white ball into an identical sized hole. It’s about the diversity of challenges, the idiosyncrasies, acquiring knowledge, research, patience, determination, doggedness and if all that fails, simply hoping that Lady Luck will turn up and smile on your efforts.

After all, in what other sport can you do everything perfectly and still fail miserably?

One fishery that offers visitors a better than average chance of catching a very big bream is the A1 Pits just north of Newark, right alongside the A1. There are 6 mature gravel pits containing big carp and most of the regular coarse species, plus a prolific stretch of the River Trent where chub and barbel abound. You can drive right up to most pegs and it is possible to fish around the clock although the access gates are locked at night.

Full details can be found on the fishery web site: www.a1pits.co.uk