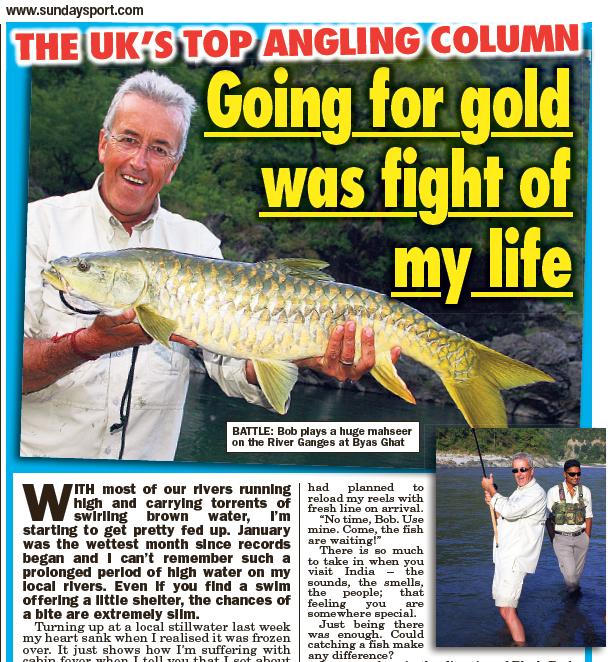 With most of the UK’s rivers running high and carrying torrents of swirling brown water I’m starting to get pretty fed up. January was the wettest month since records began and I can’t remember such a prolonged period of high water on my local rivers. Even if you find a swim offering a little shelter the chances of a bite are extremely slim.

Turning up at a local stillwater last week my heart sank when I realised it was frozen over. Just shows how I’m suffering with cabin fever when I tell you that I set about trying to smash a hole in the ice in order to wet a line. Things really are getting bad.

That evening I sat at home nursing a brew and feeling pretty sorry for my lot in life. It was time to dig out some old photos for a bit of inspiration and what did I come across? A trip from a few years back when I’d journeyed to India in search of a golden mahseer. To many anglers a mahseer is the holy grail. One of the hardest fighting fish in fresh water but quite rare and getting rarer all the time.

I guess I discovered the legendary Himalayan mahseer while still at school, leafing through books like A Rod In India and Circumventing The Mahseer in Bentley Library, but the prospects of a boy from a mining village ever treading in those footsteps were slim, bordering on an impossible dream, but one that still burned away inside me for decades afterwards.

Although it’s nearly 25 years ago I still recall the awe I felt when watching a television documentary featuring John Bailey and Paul Boote called Casting For Gold. The pair had travelled to Byas Ghat on the Ganges River hoping to catch a mahseer. It was as if the Gods were against them right until the last gasp.

You can imagine then, how I felt on the day I white water rafted down the Ganges and pitched camp on the very beach where the film was shot. We were shattered having driven to London, flown to Dehli, caught an overnight train to the Himalayan foothills and then spent a day bouncing around in a jeep before white water rafting into camp. I needed to rest but Misty, our guide, insisted this was the perfect time to catch a mahseer. We must fish immediately or miss a chance.

Unfortunately I had planned to reload my reels with fresh line on arrival. ‘No time, Bob. Use mine. Come, the fish are waiting!’

There so much to take in when you visit India, the sounds, the smells, the people, that feeling you are somewhere very, very special. Just being there was enough. Could catching a fish make any difference?

I cast my lure in the direction of Black Rock, the very same Black Rock seen in the film that haunted me, when suddenly my rod kicked and was practically yanked from my grasp as a fish screamed off at high speed. You must understand that these Himalayan rivers flow so fast it is impossible to stand up against the current. When the rivers are running high, boulders the size of small cars are rolled downstream. Yet this fish laughed at the pace of the river. It swam faster and harder than any fish I had ever hooked before. My heart was thumping, my knees knocking and a cold sweat broke out on my neck despite the intense heat. Oh boy, THIS is what the fuss was all about.

Bedlam broke out around me as camp staff came running to help, villagers hot on their heels and suddenly I was surrounded by dozens of excited spectators shouting encouragement and advice. And then catastrophe struck. Misty’s multiplier reel started playing up. I could turn the handle but nothing happened. I had no control over a fish that was maybe 60 yards or more away across a raging torrent. I tried tightening the drag, Misty even attacked it with pliers, but it was to no avail. I had no choice but to try and rotate the drum with my thumbs alone.

Inch by inch I drew the fish back towards me. Progress was painfully slow and the now bemused flock of onlookers were looking puzzled. What on earth was this English idiot playing at?

Somehow I brought that fish to within feet of the bank. It was almost mine. At least that’s what I thought. The mahseer had other ideas. With powerful sweeps of its broad tail it powered straight back across the river and took up station in the flow again.

My hands were cramping, my back ached, the heat was getting to me and I had it all to do again.

Three times I brought that fish to the bank and three times it laughed at me. On the final attempt after battling for 40 minutes I had the fish in water that barely covered it’s back. ‘Pick it up!’ I screamed at the guides. But they, too, were basking in the glory, the cheering, the excitement. This was like a last minute goal in a World Cup Final. It was pandemonium and yet again the fish set off on what was surely it’s final surging run. Only this time my line, now badly frayed on the stones, parted. I sank to my knees in despair. The jubilant crowd fell silent. Stunned. No-one knew quite what to do or say. Folk shuffled off back to the village shaking their heads.

I had just lost the fish of a lifetime. A fish I’d dreamed of since childhood. But I’ll tell you what, it was a whole lot more fun than looking out of the window here at home, frustrated by frozen lakes and flooded rivers. I need another adventure and soon!

The River Welland is less prone to flooding than most rivers and at this time of year shoals of roach turn up in the town of Spalding to provide great sport. Nets topping thirty pounds are on the cards in the right swims and you’ll also find plenty of pike in the vicinity. The river here is less than 20 yards wide and quite shallow, so lends itself perfectly to pole fishing. Best of all the fishing is free. Just don’t leave any litter or cause damage, please.