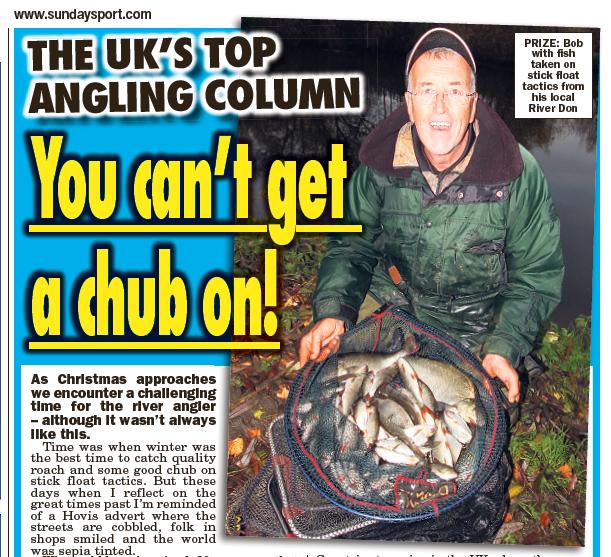 As Christmas approaches we encounter a challenging time for the river angler although it wasn’t always like this. Time was when winter was the best time to catch quality roach and some good chub on stick float tactics but these days when I reflect on the great times past I’m reminded of a Hovis advert where the streets are cobbled, folk in shops smiled and the world was sepia tinted.

Who could have imagined, thirty years ago, that roach would become a rarity on rivers like the Trent? It beggars belief that folk will bleat on about saving whales, tigers and rain forests while some have even grander ambitions. They are going to save the planet, oblivious to the fact that it was here before humans and it’ll be here long after we’ve gone. You can’t save a planet, only change it on a superficial level. Mankind’s occupation of Earth is but the blink of an eye compared with eternity.

Meanwhile a tragedy of epic proportions goes on in our own back yard while the sympathisers appear completely oblivious to what’s happening. With odd exceptions the UK’s roach population has collapsed. Dace too, and chub. There has never been a better time in history to catch specimen fish because they are no longer a prized needle in a haystack. They are the haystack. But when the current crop of specimens dies off, as they will, there’s a whacking great shortage of small fish surviving through to adulthood to replace them.

It can be argued there are four main reasons for this. The disastrous canalisation of rivers, drains and streams back in the 1970’s which removed every semblance of habitat. Chemical fertilisation of the land to increase crop yields has increased the nitrate levels in ground water. The drugs and chemicals we pump into our bodies ends up going straight through the sewerage systems and into our waterways – hormones in oral contraceptives are actually causing fish to change sex! And then there is predation. Let’s ignore the cruelty of mass re-introduction of otters into waterways where the food chain is clearly broken and in need of repair, instead we must focus on the massive influx of cormorants that now overwinter in the UK.

Not long ago it was estimated 2,000 birds would arrive each winter from Eastern Europe. These were numbers we could cope with and where they caused a problem they could be managed. Then came the disastrous European Parliament cock-up where a bill, intended to protect just one species, the rare pigmy cormorant, was widened to include ALL cormorants. Some idiot missed out the word ‘pigmy’. So, henceforth if you wished to remove so much as one bird without obtaining a license involving a protracted and convoluted process then you would be breaking the law. To get a license you practically had to prove the cormorants had eaten all your fish already and even then you might only be allowed to shoot a couple of birds. It was a farce.

Birds that were previously treated as vermin now traverse Germany, France and the Low Countries to arrive in the UK where they systematically wipe out our fish stocks. Be under no illusion, the cormorant is a highly effective, intelligent predator that works in flocks to herd prey into areas where they can be decimated. Angling clubs were impotent to stop these marauding birds that rapidly became known as the black death.

It is estimated that anything up to 60,000 birds now overwinter in the UK and each will eat up to a kilo of fish each day. It does not take a genius to work out these numbers are not sustainable.

If a dog worries a sheep the farmer has every right to shoot it. Farmers regularly cull pigeons, crows, foxes, deer, bunny rabbits, in fact anything that affects their livestock or crops. Fishery owners are denied this right and it is only those who have operated outside of the law that have given any protection whatsoever to the silver fish species of this country.

The upshot is chilling. The roach population of a river like the mighty Trent, once renowned for its winter roach fishing, is probably less than 5 per cent of what it was 30 years ago. But there are still pockets of fish to be caught and it is at this time of year the fish shoal up tightly. If you find the shoals you can still enjoy a decent days sport but you either need to know a friendly bailiff who is prepared to share his knowledge or hope that someone has been bragging in a local tackle shop and make no mistake, this happens a lot. Loose lips and all that.

There is no more pleasurable way to catch silver fish than with stick float tactics – providing you can find a shop that still sells them. If you draw a blank try Googling Dave Harrell. He still makes some of the finest floats available.

Ironically the stick was invented by anglers who caught roach from Lancashire canals on slowly falling casters but once the likes of Ashursts and Heaps turned their attentions to rivers like the Trent they cleaned up with their method and started a revolution that spread to every river in the country. Today the stick float would be as popular as ever were it not for the fact the species it was used to target have gone into a tragic decline. But there’s still time to make hay while the fat lady is still clearing her throat. There are pockets of fish to plunder. You just have to find them.

If you are searching for somewhere to catch roach on flowing water check out the River Hull, especially in the shipyard area because it is bang in form. The recent Hull Championships saw nets of roach topping 30lbs taken on stick float tactics from this pacey tidal waterway. Best of all the fishing is free so do everyone a favour and don’t leave any litter. You can obtain more information by calling into or ringing Hull Angling Centre (01482 374201) and Satnav users can find the hotspots by keying in HU17 0HQ.