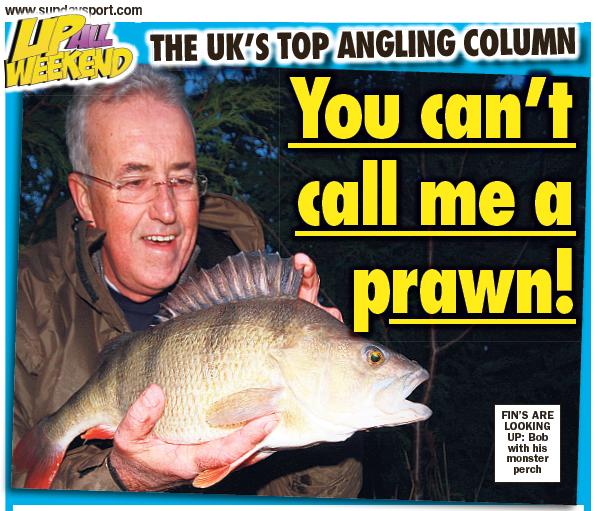 Don’t Call Me A Prawn

The vast majority of commercial fisheries in the UK do not contain pike. They simply aren’t a match fishing target which is the fundamental purpose of these small, man-made ponds, so it would be completely at odds with stocking policies to introduce a fish-munching predator that might easily grow to 30 or even forty pounds on a pretty limitless diet.

Trouble is Mother Nature abhors a vacuum. If the fishery owner fails to introduce predators you can bet your bottom dollar they’ll arrive soon enough. It’s believed that fish eggs are transferred on the legs of water birds and I don’t doubt that. Near where I live there are countless small ponds created by the building of railway embankments and flood defences. No one has ever stocked them with fish but practically every single one has an established population of perch and usually a few jack pike and it’s amazing how quickly newly dug lakes get populated.

Without pike, or at least very few pike, there’s a vacancy for an apex predator. Now most species at certain times of the year, particularly in springtime, will feast on fry. I know friends who’ve tried to fish with deadbaits on commercial pools for big eels and they have been driven potty by carp that will not leave their baits alone. Indeed a friend of mine, Mark Barrett caught a 40lb carp on a deadbait intended for a pike. However, these are exceptions rather than the rule.

One species that’s rarely targeted by the commercial match angler is perch. It’s far easier to build a weight with carp, or bream, tench, ide and almost anything else in these waters. And of course, perch don’t eat pellets, the match anglers bait of choice, because all the other species mentioned do.

Odd perch get caught on worms but to be honest, there are so many small fry in these fisheries that the bigger perch feast almost exclusively on fry and small fish up to two or 3 ounces. Throw in the fact that big perch mainly feed early or late in the day when matchmen aren’t around and we get a situation where they can exist in secret and everyone is oblivious to their presence barring the occasional fluke capture.

Few anglers realise big perch exist in their favourite waters and it takes someone with a specialist background to bite the bullet before they are discovered. Yes, it can be a bit like kissing frogs but put the time in and soon enough you’ll discover a princess. In fact you might find a lot of princesses.

Fishery owners love making up rules. Some fisheries have more rules than there are Chins in the Beijing telephone directory. None that I know of will allow the use of live fish as bait and that’s pretty much all that big perch feed on during the warmer months. It’s only when the really cold weather sets in we get a chance to catch them on other baits like lobworms. A big juicy lob sorts out the specimens but unfortunately you are just as likely to catch a carp as a perch. Carp are the bain of the specialist angler’s life, forever sticking their noses in where they’re not wanted.

In recent years a new perch bait has come to the fore that is fairly selective although it does attract a few enquiries from other species because they’re nothing if not inquisitive. What am I talking about? Well let me give you a clue. Roy Keane reckons they’re very popular with a certain element of the crowd at Old Trafford. Yes, that’s right. I’m talking prawns. Not the skimpy little things mind, I’m talking great big king prawns, and to be honest it breaks my heart when I break out my sandwiches and realise the perch I’m hoping to catch are getting better food than I am!

Why a perch is attracted to a great big pink bait, who can honestly say? It’s like nothing that occurs naturally in the waters I’m targeting and perch don’t have to be educated into eating them. You can catch perch on prawns first time out from lakes where they’ve never been used before.

Last week I nipped down to a local commercial and gave prawns a go. Word was that this pool held a few massive perch. After 3 hours I was beginning to doubt my sanity. Mad for listening to gossip and mad for using such an unusual bait. And then the float dipped. It dipped again before disappearing completely. I struck and the rod took on a healthy curve, so healthy I thought I might be attached to a nice carp as something tried to power away along the margins. I continued to think it might be a carp right until the moment when a huge spiky dorsal fin broke the surface and my knees began to knock. This was an enormous perch.

Later I had another, only this one was slightly bigger. Two bites, two specimen perch and one happy angler. Who was complaining about the price of prawns now, I ask?

Of course, I could easily have blanked. If a thousand anglers read this and copy what I did then 500 of them might blank but the other 500 will be in perch heaven because this is a bait that works a treat. If you try it and blank the answer is try a different water and then keep trying new waters until you score, because sooner or later you will. Of that there’s no doubt because there are more big perch out there just waiting to be discovered than you imagine. It just needs anglers with enough bottle to go out there and find them.

Three large lakes, to 25 acres and stuffed to the gills with fish. Earleswood once held the UK 5-hour match record with a catch weighing 414lb 14oz from Engine Pool so there’s no shortage of fish. The fishery is well maintained with ample parking with many of swims having wooden platforms. Windmill Pool is very popular with pike anglers during the winter months.