Martin James is the voice of angling in the North West of England thanks to his regular Thursday night angling programme on BBC Radio Lancashire. His latest book, At The Water’s Edge, appropriately named after his show, charts his fishing life as well as contributions from a number of esteemed guests. Packed from cover to cover with great images, it details his exploits over the past 50 years or so and it’s a must read, whether you be a coarse, game or sea angler. Martin and his publisher have kindly agreed to allow me to serialise four extracts from the book, this being the first… 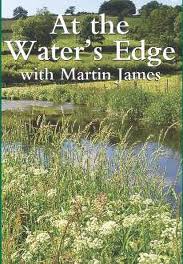 Last week I visited the river for just a couple of hours each day to check on my mink traps and scare off the cormorants, though I did check the water temperature, which over the past few days has been 34°F. On Sunday, Brendan Ince joined me for a short session of chub-fishing.

Snow and ice was everywhere, from a distance the river looked black against the white, snow-covered banks, the surrounding white hills were shrouded in mist, it was a slippery journey down the long ice-coated track to the river, in driving conditions more suited to a four-wheel drive than Brendan’s Ford Focus. Eventually we pulled into the car park.

As we did so half a dozen mallard shot skywards, a few years ago I would have had a loaded twelve bore, and no doubt I would have got off at least one shot, if not two. I shivered in the easterly wind.

Unwinding the cord from my thermometer, I dropped it into the ice rimmed margin of the river, five minutes later I got a reading of 34°F. Chub were our quarry. As we waited for the kettle to boil, I put together a 12ft Avon action rod, Mitchell 300 reel, 1953 vintage, but still perfect for the job. Blowing on my cold, shaking fingers and hands, I attempted to push the end of the line through the guides, occasionally wiping tears from my eyes, caused by the cold wind. Finally, I managed to tie on a hook after three attempts.

As I get older I find the simplest of jobs becoming difficult. 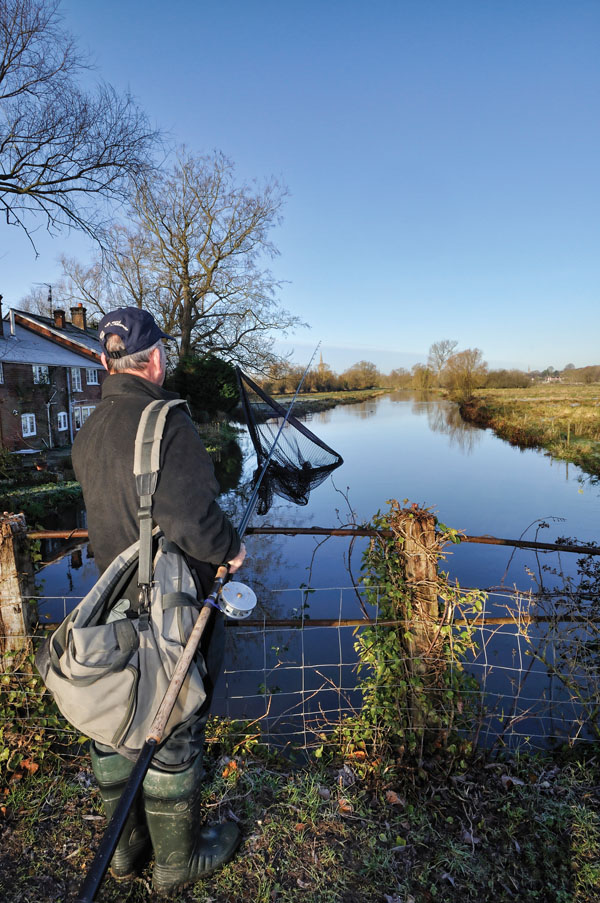 Standing the rod against the fence, I turned to see steam coming from the spout of the kettle, soon, Brendan had a mug of coffee, for me a mug of tea with a piece of fruit cake, the day suddenly seemed a lot better. I could see flocks of fieldfare and starlings, and then a robin appeared, I gave it some pieces of cake which were greedily eaten, as if there was no tomorrow.

Finishing off the last crumb, he puffed himself up then flew to the shelter of an ivy-clad beech tree. Please make sure you have some ice-free water in the garden for the birds and don’t forget all the table scraps. No doubt you will have some stale cakes left over from Sunday tea or a birthday party. The birds will love them.

A group of long-tailed tits suddenly appeared in a nearby willow tree, their restless activity and acrobatic actions resembling those of other tits as they worked to-and-fro through the branches seeking tiny flies and other insects. The excellent eyesight of these delightful birds never ceases to amaze me.

Tea finished, I chucked a loaf of bread into my small shoulder-bag, along with some soft cheese and sausage paste, adding a towel, my JetBoil stove, a small bottle of water, tea bags, powdered milk and mugs. I slung my chair over my back followed by the bag; picking up rod and landing net we headed off upstream for a couple of hours fishing before dark.

Walking alongside a small copse, two small roe-deer suddenly appeared, then a pheasant shot skywards in panic. After fifteen minutes of brisk walking we arrived at our chosen swim, a dark deep-looking swim overhung by a big ivy-clad oak tree, many of its roots plunging deep into the water offering a sanctuary for fish from the marauding cormorants that have invaded our rivers.

The first thing I noticed was the ice, covering the very slow flowing area of water which extended several yards up and downstream, a quarter of the way across the river we had a perfect crease with a steady flow on the outside going from left to right. From many previous experiences of fishing the area we had six foot deep swim over small stones and gravel.

Let me say this once and once only. Forget all the rubbish you read about fishing small baits and light tackle for winter chub it’s a lot of nonsense, I use my normal gear which includes 6lb line and size 4 hooks. My first bait is bread, either crust or flake, I always start with crust. I also have some cheese and sausage paste as extras. If lobworms are available, I will have a few. 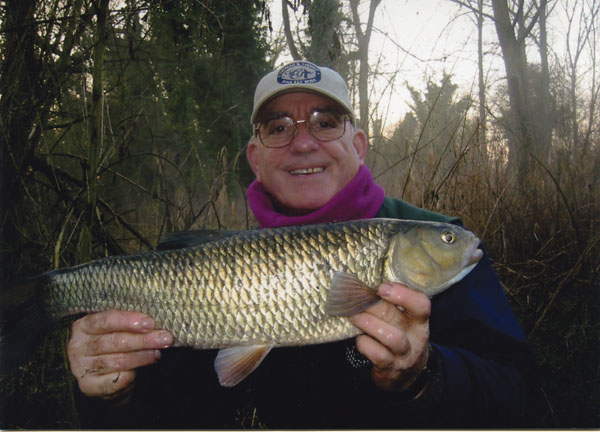 Bites usually are a light tap then a good pull. Only about one percent of bites are usually small pulls. Most bites will pull the rod in, if given the chance. What I usually do on feeling or seeing a light movement on the rod tip is to push the rod forward, giving a bit of slack – then it’s usually a good strong pull.

We both lightly pinched on one LG shot about three inches from the hook then baited with a piece of crust. A slight underhand swing had the baited hook settling in the right spot. Watching some line come off the spool, I banged over the pick-up, and then settled back, holding the rod with the butt resting on my thigh, at the same time I held a loop of line and watched the rod tip.

Within minutes I felt a savage pluck. I released the line then, as the line tightened, I made a firm strike. Nothing, I thought, “How could I miss a perfect bite.” I made another cast to the same spot, ten minutes later the line went slack in quite a dramatic manner. Another fish missed, this time I reckon the fish must have moved six or seven feet upstream.

We fished on for another fifteen minute with no more bites, and decided it was a time for home. As we walked across the snow covered fields, I tried to work out how I had missed some perfect bites. I didn’t have an answer. Sadly, Brendan, who sat next to me and fished the same swim, didn’t get a touch. Fishing can be a strange game but we both reckon it’s still the greatest sport.

I suppose it was about three o’clock in the afternoon when I came off the ice-free road for the long drive down an ice-covered track, one false move and I would be down the bank, I drove at no more than ten miles an hour. Automatic cars are not the vehicles for driving on sheet ice. Eventually I was in the car park, heaving a sigh of relief. Climbing from the car, I pulled on my windproof arctic smock, certainly an excellent garment for this weather. Taking the rod and shoulder bag from the back of the car, I then put together my landing net then picked up a rod rest. I was ready for another chub-fishing session in wintry conditions.

I went off downstream for half a mile, choosing to fish in the area of an alder tree. I wanted to fish a slightly deeper channel; twenty feet out from the tree and fifteen feet below it, there was a three foot wide side-stream which flowed into the river, creating an ice free area. In front of me, and for some fifty feet upstream, was a length of ice-covered water extending ten feet out from the bank.

My downstream swim had an estimated five feet of water over silt, sand and gravel with the odd football-size rock. Baiting with a piece of crust, I dropped the bait into some steady water on the outside of a crease; minutes later the rod tip moved slightly then pulled round in a savage manner. 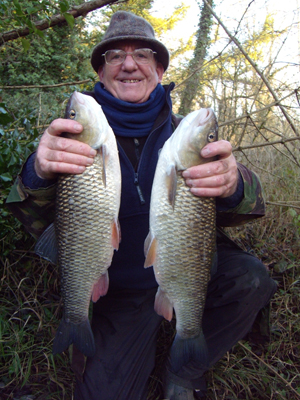 I set the hook into a fish that dived towards the margins, no doubt seeking the sanctuary of the tree roots. Pulling the rod over and upstream I bullied the fish away from the danger. Suddenly a chub of about three pounds swirled on the surface where it was quickly netted. Taking out the barbless hook, I lowered the net into the water and watched the fish swim away.

I fished on until darkness with no more bites, though I did get the rod tip pulled round on a few occasions as chunks of ice floating down river hit the line. By now my rod was frost-covered, landing net frozen to the ground and my feet were starting to feel the cold. I called it a day. Walking across the fields, I disturbed a skein of Greylag geese, and then spooked two hares. Back in the car, I listened to the weather forecast, hearing the announcer say that the “Arctic conditions could be with us for a week-to-ten days.” Not good news. It was a slow drive up the ice covered track, but within the hour I am indoors.

Today, Tuesday, it’s snowing hard; no buses are running from my village into town, certainly not the day to be driving, my car stayed in the garage. I kitted myself out with walking boots, a good pair of waterproof trousers, my arctic smock, trilby hat; then, with haversack on my back I walked the six-or-seven miles into town.

Despite the heavy snow storm, it was an enjoyable walk, some of it alongside the river, other times, through a small wood where I watched several fieldfare feeding on some hawthorn berries. After a quick walk around town, picking up my Angler’s Mail and a few items of shopping, I walked back home. Looking at all the snow that has fallen and the forecast of frost tonight, I don’t think I will be able to get on the river tomorrow.

Martin’s book, At The Water’s Edge can be purchased on line from Tackle Discounts