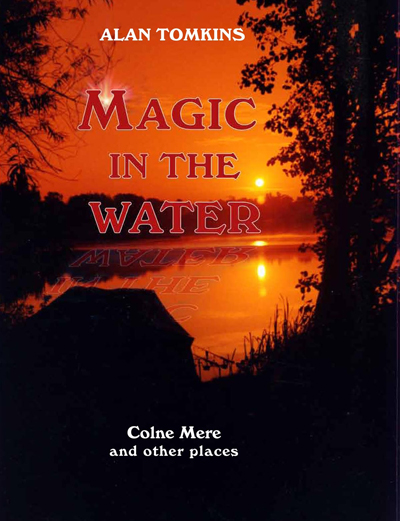 Magic in the Water by Alan Tomkins

You almost have a heart attack when you get the run, the fight almost brings on another one, then after netting the fish you are frantic with worry about it until it has been returned and has safely swum away. If you sack it up, you sit there and worry that it might get away before you’ve photographed it, or that it might die in the sack. Just which part of all this are we supposed to enjoy?

This was a lovely fish – a scale perfect common of exactly twenty-two pounds. I felt much better now. I’d called Jason down while I was playing the fish and he reminded me that the Bruno-Lewis fight was being broadcast live on the radio at around 1 a.m. That was handy – I was wide awake now – that would give me something to listen to.

My diary doesn’t record the result of the fight, but didn’t Frank narrowly lose? I was definitely a winner though for just after the fight finished I was into another fish. Again it weeded, again I pulled it out then began yelling for Jason.

Fat chance – he was fast asleep. The fish wasn’t though and it was a good fifteen minutes before the tide began to turn in my favour. As it came closer, weed began to build up in the rings. I became very anxious about this as I have had weed clog the rings completely. There wasn’t much I could do about it either. But the fish was tiring – God he felt heavy, even allowing for all the weed involved. There was certainly a large piece of carp in there somewhere.

By fits and starts he came closer. “Please don’t pull out” I pleaded with the invisible hook. The fish came towards the net, but then into water so shallow I couldn’t net him. He swam past me and then back out into the lake again. I waded out a bit further and the trickle of icy water down my left leg told me that once again my waders were leaking.

I edged back a fraction and at the same time turned the fish back towards the net, this time in slightly deeper water. I could just make out the glint of its head and pulled this towards the spreader block. He slid over but then once again tried to turn and get back out into the lake. But I had already lifted the net. He was trapped.

I put the rod down and reached into the bivvy for my torch. Gripping this in my teeth I shone it into the net and started pulling back the weed. But there wasn’t that much weed in there – just an awful lot of carp. This was a big one! Quite obviously too big for my thirty-two pound Avons. I did have a pair of forty-pound Salters with me, but these can be hard to read properly, especially in the dark. I’d need Jason’s scales (Jason is an optimist and carries Nash fifty-six pound scales).

I sacked up the carp, a big mirror, and tied the cord to an over-hanging tree. After checking and double checking the knots I sloshed off through the mud followed but my very wet and puzzled spaniel. “What’s up” said Jason after I’d woken him up. 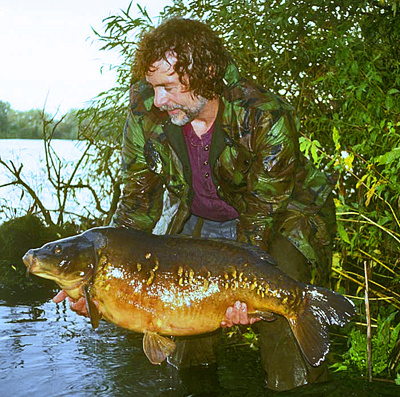 “I’ve got another one” I replied.

“Dunno – haven’t weighed it yet – I need your scales”. Jason got a bit excited here because he knew I carried the forty-pound Salters.

“No – not in this weather – I’ll be down first thing in the morning”.

For the first time I noticed it was actually pouring with rain and I was soaked. Taking the big Nash scales I plowtered back to my swim. The fish was removed from the sack, slipped into the sling and weighed. A fraction over 37lb 8oz. Jason knew it was 35 plus when he heard my whoop. I put the carp back in the sack, got out of my wet clothes and climbed into the bag.

I wasn’t disturbed again until Jason came along at about 9.00 a.m. What a night! And all the fish had taken my new boilies. I didn’t have my camera with me so had to go home to get it. It didn’t take long and I was soon back, accompanied by my young son. He was staggered by the size of the carp; what a superb brace. I was now fully recovered from the broken hook episode, though it did leave me wondering at what sort of a trio I might have had. I had a serious case of ‘session legs’ after that night. 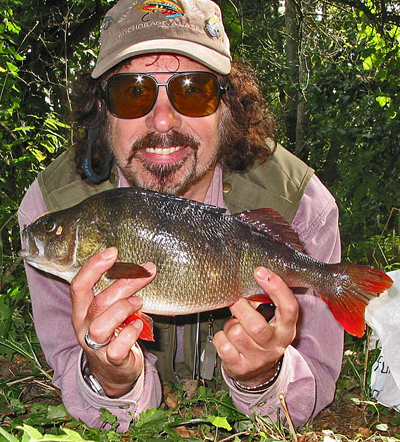 Magic In The Water is published by Fishing Booksender with a print run not exceding 500 and around 50 leather bounds. To order this title please send an email to info@fishingbooksender.co.uk or telephone 05601 972040.

Alan’s enthusiasm for fishing was fired almost as soon as he could read, when he borrowed a copy of Mr Crabtree Goes Fishing. In Magic in the Water you can feel his real love for and fascination with water, its inhabitants and those of the land that surrounds it. He has fished for specimens of most species in his long angling career, but has mostly taken his own route to do so, strongly believing how you do it to be as important as what you catch.

By his own admission Alan has never joined the big fish circus or toured the circuit waters, but rather fished the waters he liked for the fish that were in them. Sometimes they were quite big. Unlike many of his contemporaries, he has never fished full-time and is keen to show what can be caught within a limited time frame if a little thought is put into it.

Magic in the Wateris his second book although he has written a number of articles for various angling publications since the 1970s. This book is about one man’s fishing life and the waters and fish that attracted him. It covers not only the captures of carp, pike, tench, perch, roach, barbel, chub and other fish from lakes and rivers across the country, but also the frustrations we all share of not being able to catch. It also includes a section on game fishing for trout and salmon in both this country and Alaska.

In the carp world he is renowned for his exploits to tempt the huge carp from Colne Mere including the Black Mirror. The book goes into great detail on the five seasons he spent fishing there. Alan and a few like-minded friends were the first to realise the potential of this then hardly known water and did much of the pioneering work there. The Colne Mere section of the book also includes a fascinating transcript of a taped discussion about the water between Alan and two of his friends .

Alan is an excellent photographer and we hope the publication has done justice to his work. The book runs to 384 pages with over 300 photographs.

Alan worked full time in IT and since being made redundant and taking early retirement spends his time teaching all aspects and all types of angling in the summer and working abroad as a ski instructor in the winter.