This article is ideally read in conjunction with Nile Perch – The Poor Man’s Marlin? which you’ll also find on the web site. Postcards is simply a series of illustrated short tales and observations.

It’s Getting’ Kinda Crowded Round Here…

I had expected to be fishing in a huge expanse of water, after all the lake does cover more than 2,000 square miles yet we were joined for three days by a bunch of oil workers from Cairo. Nine of them in four boats, it was to be a lads weekend with boisterous fun and lots to drink:

Texan to Louisiana home boy, “Hey ‘Coon-ass, you drinkin’ beer this early in the day?”

“Well, ah-guss it must be 6-o’-clock somewhere in the world…”

Fishing in the States is pretty much a social thing, far less serious than it is over here, so the concept of space is alien to them. In this shot you can see three boats criss-crossing our wake to hit the mark we have just trolled over and you should bear in mind that our lures are fully thirty yards behind our boat.

It wasn’t for me so I mentioned it over dinner, “You know, I was thinking that myself,” Said the Texan, “We’re fishing the only man-made lake big enough to be seen with the naked eye from space and it’s kinda crowded!”

Later in the week, Stu and I had the lake to ourselves, or so we thought. As we tried our best to tempt fish that kept appearing on the fish finder close by a sunken tree another African Angler boat appeared from nowhere and proceeded to muscle in on our mark. To make matters worse they hooked into a good fish within minutes. When it’s a hard week you really don’t need that!

It was clear that very few big perch were to be found inshore at the time we were there so Stu and I frequently amused ourselves by trying to catch anything that swims on rubber lures. Unfortunately these were attacked time and time again by juvenile tiger fish. This we didn’t mind because at about 12oz apiece they make cracking deadbaits that can be wobbled or left out at night for catfish. 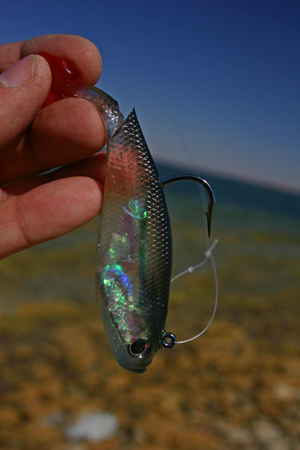 Unfortunately it proved an expensive endeavour because the little beggars have ridiculously sharp teeth. 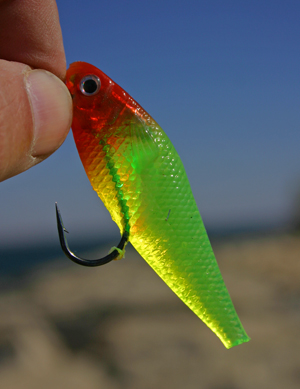 Lures were slashed repeatedly and sometimes had their tails bitten clean off but the funniest attack of all left one rubber lure looking like something out of a Tom and Jerry cartoon when a perfect semi-circle was bitten out of it. 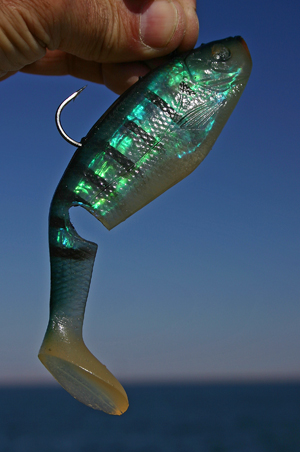 For weeks before we fished Stu had raved about a shoreline spot called Maria. It features in John Wilson’s Nile Perch DVD and he was desperate to fish there. Alas, the water level was ten feet lower on our visit and some plucky fisherman had stretched a net out parallel to half of it just 10 yards out from the shore.

That alone would have been frustrating but to then share less than 200 yards of water between 11 rods was too much for me. I’ll maybe check out the old girl another time. 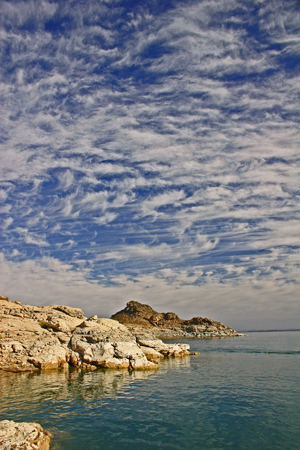 You would be lost on a lake like Nasser without a decent fishfinder. The fish are not spread out evenly and if truth be told I suspect it’s not a rich lake. There appear to be vast barren areas and the fish you do see are all close to some structure of other. This may be a ridge, sunken island, plateau, cliff, rocky margin, submerged trees, weed beds, etc. 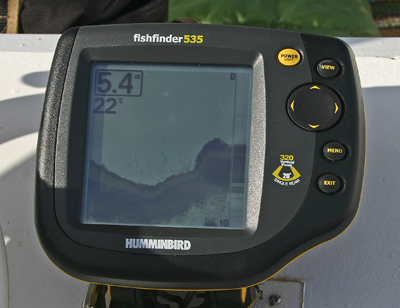 Trolling isn’t rocket science if you can find fish, select a lure that works at the appropriate depth, choose the right colour, and then work out the right speed to run it at them.

After that you can only hope the fish ‘bites’.

Tackle For The Job

If I went back tomorrow it would be with exactly the same trolling gear. A Daiwa TDX 4-10oz uptide rod combined with a Daiwa SLOSH multiplier. Loaded with 30lb Sensor Clear line this proved to be the perfect combination but with hindsight and having talked at length with Yousef Received wisdom is that nylon is better than braid because nylon shows up damage and wear better. We used clear 80lb flourocarbon leaders to withstand chafing on rocks and stuff. 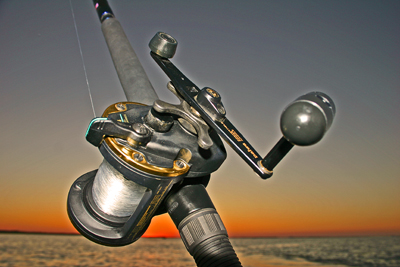 Next time I’ll use 50lb braid. It is superior, works a lure deeper and you get a sight more on the multiplier. You have to check it very carefully if you have been dragged through snags though.

The real benefit is in hooking up with fish. I used 30lb line and landed every fish I hooked. In between times I tried 50lb braid with the same 100 percent success rate. Stu meanwhile loaded his with a very popular brand of 40lb mono. The stretch factor of which was to prove highly significant and cost him almost as many fish as he landed, so much so, Yousef took to crying out, “Mister loser man!” after each lost fish.

Braid gives you more direct contact with the lure and far better hook-ups. It’s what I will be using next time.

Fortunately I was able to borrow a selection of lures from a mate who had fished Nasser in the past and in truth you can get away with a surprisingly small number of lures. The picture here shows three sinking depth raiders above a Shad Rap and two floating Depth Raiders. Throw in a few spares in different colours and you’ll get away with that for trolling, especially in springtime. 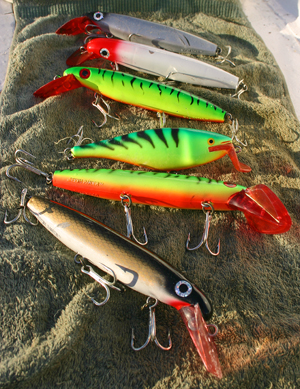 If you plan to visit Nasser twice, buy your own lures but take care to upgrade the trebles and the split rings.

Alternatively you can hire a box of proven lures from African Angler. Just to be on the safe side Stu and I hired one box between us rather than one each but this still set us back a hefty £60 a week, plus you have to pay for any lures lost on top. We never used a single lure from this box. Ouch!

For shore fishing, drifting or fishing at anchor you’ll definitely get more takes using soft rubber lures. We used the new Daiwa Dictator Sonic Tail and Sonic Shad Lures (Stu, for info on pics, the Sonic Tails are the big ‘uns and the Shads are the little ‘uns)

There are 18 different types of catfish in the lake, the biggest being the vundu and bagrus which go to over a hundred pounds. Fishing pressure by the locals means they’re quite thin on the ground. We tried with large lumps of luncheon meat, some Dynamite Monster Meaty chunks and deadbaits to no avail.

You can take specialist rods but there’s a limit to how many rods you can carry. My advice is that you simply use your trolling rods.

Pretty obvious stuff, really. Sun blocker, sun lotion, after sun balm, moisturiser and lip balm. A wide brimmed hat or peaked cap, long sleeved shirts and durable boots. This is certainly not flip-flop terrain. Polarising specs are a must but make sure you can secure them with a neck chord. 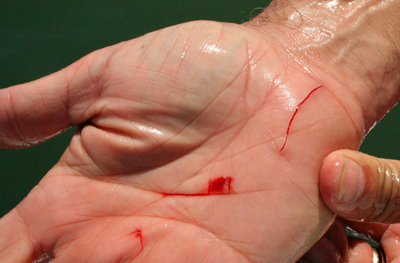 You also need to take care when handling perch and a first aid kit comes in handy now and then. Mostly they’re pretty docile in the boat but once in a while one will catch you out as you can see from the results of an encounter I had with the dorsal spines of a mere 15 pounder.

I have to say the food on our trip was fabulous. We fished and slept on the smaller boat in this picture, the larger ‘mother’ ship is where we ate, showered and had the use of a proper flush toilet. We moored up close by it each evening for our evening meal and ate breakfast on it, after which it would steam off ahead of us for a lunchtime rendezvous further down the lake. After lunch it sailed on again. 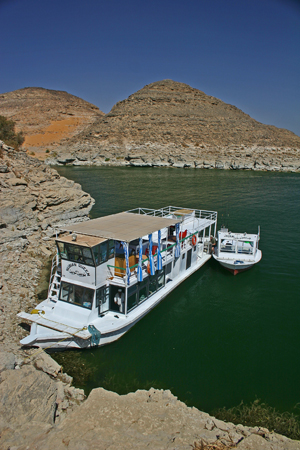 The crew were courteous and helpful. Most have served their time in hotel kitchens and on cruise liners. To cook for a small group of people in brilliant surroundings must be their dream job and it shows in the quality of service we received.

You’ll notice that few Nasser articles show anglers swimming in the lake. Maybe the crocodiles have something to do with that… 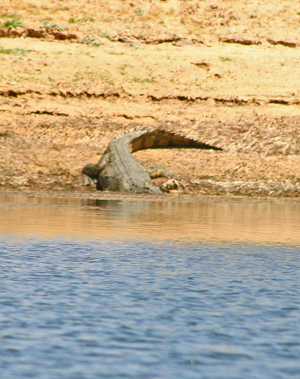 We also saw giant monitor lizards and the most amazing variety of birdlife but one highlight came just after dark when a pack of desert foxes came prowling round on the scavenge for scraps. 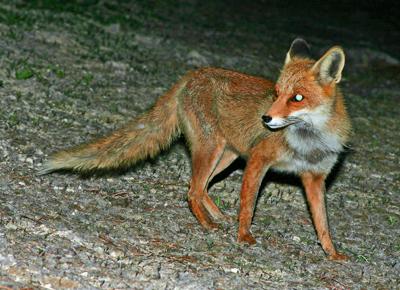 Not once did we encounter a snake or a scorpion.

The Biggest Edge I Can Give You

Listen up, if I was to return I know for certain that I could catch more fish and if you are going there so can you. This dodge made all the difference when I was catching and Stu wasn’t. Your guide will suggest you trail your lures around 30 metres behind the boat. If your mate does as he’s told, place your lure two yards nearer the boat and you’ll catch more than him, simply because yours is the first lure to pass any fish you see on the fishfinder. 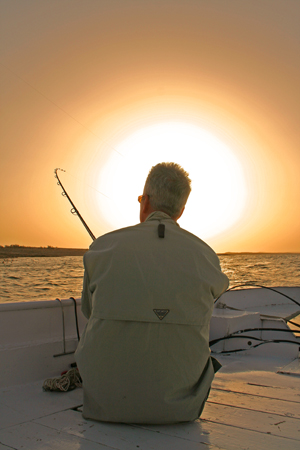 Call me an idiot if you like. I worked this out on day two and shared my theory with Stu on day three. For some mad reason we then both got bogged down in the frequently suggested excuse for poor results that Nile perch have grown afraid of lures and they spook away from the boats’ engine noise, hence we entered into an unspoken pact to see how far away from the boat we could run the lures when we would have been far better off fishing closer. This was a BIG mistake.

Sky at Night (go on, ask me how we took this one!) 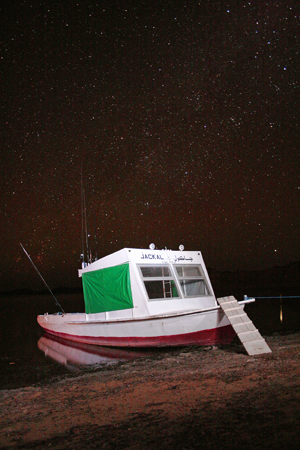 I’ve been to many countries around the world and seen incredible sights but few so breathtaking as the night sky above Nasser. Our trip coincided with the tinniest sliver of a new moon so the jet black sky was studded with a million stars. Never before have I seen so many stars and constellations with my naked eye. Lord only knows what you’d see with a telescope or even binoculars.

In case you missed it, the first part of this article can be found here.

3 thoughts on “Postcards From The Nile”