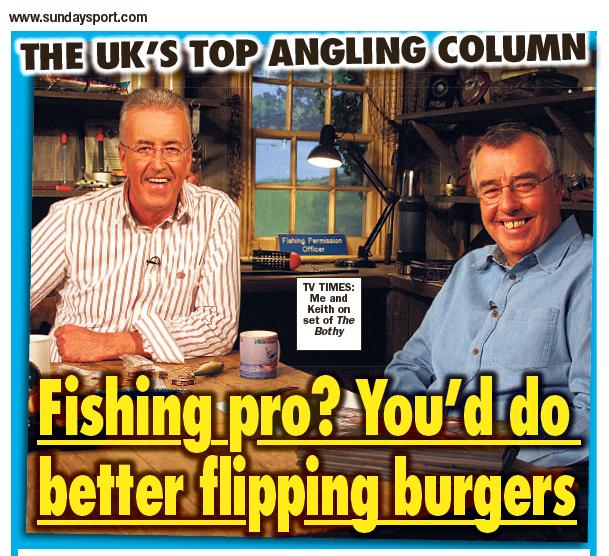 No Rest (or fishing) For The Wicked

It is the ambition of thousands of up-and-coming anglers to work full-time in the fishing industry. Unfortunately their idea of work is sitting by a lake behind a couple of rods and getting paid for catching fish. If only it were like that.

I know a number of anglers who are full-timers and it’s not a job I would recommend to anyone who has other talents unless they knew exactly what they were letting themselves in for. The perception is that the pros fish all the time when in reality we do anything but. In fact pro anglers probably get fewer opportunities to fish than someone in a regular job.

This week I’ve been stuck behind a desk for several days catching up on writing articles for newspapers and magazines, updating my web site and getting the shop section ready for the launch of some new products.

It’s also trade show season so it’s important to spend time meeting up with sponsors, making sure they’re happy with what I’ve been up to, talking about the development of new products and what’s going to be in the pipeline for next year.

And then there’s the demand on your time from anglers, clubs and societies. ‘Bob, is there any chance I can book a day’s coaching?’ When you tell them, fine, but you’ll be charging the same rates that a plumber or an electrician would for what is certain to be a 12-hour day there’s usually a gasp at the other end of the phone line followed by a click

‘Will you come and give a talk to our club? We’re happy to slip you £20 for petrol expenses and buy your drinks.’ Wow, that’ll pay the mortgage then. And the drink’s bill isn’t going to break the bank if I’m driving.

‘It’s for charity.’ Is another favourite. Can you give us some prizes?

Journalists ring up all the time asking for opinions and quotes for stories they are working on. There’s never any payment. ‘Oh, and have you got a picture we can use?’

Seriously, don’t go down the full-time angling route. Get a job in a burger bar, financially you’ll be better off in the long run because there are only so many magazines and newspapers that publish paid-for articles and there’s an army of wannabees out there who’ll do it cheaper, indeed for nothing, just to see their name in print.

Fishing is one the worst paid jobs in the world, certainly in this country, but do you know what? I love it. And it’s because of that I do what I do. The returns are emotional rather than financial. I just need to work a second job to pay the bills and be prepared to burn the candle at both ends.

The coming week is going to be a busy one. Two columns to submit on Monday. Hopefully fish on Tuesday. On Wednesday (6th November) Stuart Walker and I are giving a talk to the Nottingham Piscatorial Society in the fabulous Dome Room at Kelham Hall. It’s a spectacular building designed by the same architect who created St Pancras Station in London. This has meant a couple of days have already been set aside to create a film based presentation for the first half based around the making of our DVDs including the usual array of bloopers and outtakes and then I’m delivering a picture-led presentation  in the second half explaining how I tackle the River Trent.

In addition there will be stands representing the Environment Agency, the Angling Trust, the Barbel Society plus several bait and tackle companies. Entrance to the show is just £5. Yes, you read that right, a fiver, and all proceeds raised will go to the NPS Juniors so yes, I’m out of pocket again. Anyone can be a busy fool!

Catch Me On The Box

The following day I’m in London to record a TV show. I’m the studio guest on Sky Sports’ Tight Lines

on Friday evening (8th November) and the show will include the very first preview clips from two DVDs I’m launching next week.

It shouldn’t take a genius to work out that Caught In The Act Parts 3 and 4 follows on from the very successful Parts 1 and 2 released last spring and they really are must-see viewing for any keen angler. It involved 89 filming days over 3 years to capture the footage and as long again to edit. They will make brilliant stocking fillers at Christmas but for now they’re available only in the shop section of my web site.

Appearing on TV is not nearly as nerve wracking as I initially imagined it would be, in fact it’s a bit of an adrenaline buzz and I actually prefer the heightened tension of live broadcasts because you simply cannot make a mistake or accidentally swear. Keeps you on your toes.

Over the past 15 years I’ve done everything from live studio broadcasts, to Fish-‘o’-Mania, and yes, I’ve performed with a rod in my hand on many an occasion (there’s a gift for you Neil!) I’ve even demonstrated my tackle on QVC so it’s fair to say I’m pretty much an old hand at the presenting game.

Despite that, working with Keith Arthur in ‘The Bothy’ is always easy because he really is the consummate professional. The Bothy, for anyone who hasn’t seen the show, is the inside of a fisherman’s hut where we sit around a table and chat about fishing.

I was shocked to learn how many viewers are actually under the impression the show is filmed inside a real shed in Keith’s back garden – seriously!!! Let’s hope I’m not shattering too many illusions but it’s a stage set, just two wooden panels erected inside one of Sky’s West London Studios. A variety of other programmes are made there during the rest of the week.

It’s all a bit of an ‘in’ joke though I have to say the crew make a considerable effort to keep up the pretence. Can you believe they change the lighting outside of the Bothy window to match the seasons and sunset times? They also have photographs of all the props on the shelves so each week they can appear in exactly the same place?

It’s mad really. Which pretty much sums up my life.