Tales Of The Riverbank is a collection of stories from my past, a retrospective blog if you like. They are the truth as I remember it which means you may remember them slightly differently, if of course you happened to be there. In this chapter I look back affectionately at some special times in Anglers Paradise. Enjoy!

Trips to Anglers Paradise are seldom uneventful and it’s mostly due to the kind of characters that it seems to attract. The old joke – you don’t have to be mad to work here, but it helps – could as equally be applied to the guests never mind the staff, but it’s all good fun and everyone sems to get along famously whatever scrapes we get into. To anyone who has never been then you may think I exaggerate, to those who have, well, you know it’s the absolute truth, don’t you?

Netting parties seldom pass without incident. But first let me explain what a netting party entails. 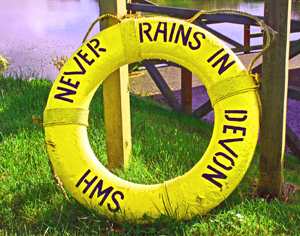 Located in Devon the Paradise lakes benefit from a fish friendly climate; hot summers followed by wet and relatively mild winters as a rule. Certainly drought is never an issue and the carp in particular appear to enjoy healthy sex lives, so much so that there’s a great risk of over-population and stunted fish.

As a consequence each lake is drained, netted, de-silted, fertilised, refilled and the best of the stock returned on roughly a three to five year cycle. Most of the small fish are removed and sold on. The work is undertaken in November and ties in nicely with bonfire night.

Believe it or not, folk pay good money to go down there and work their socks off. Okay, the netting part is usually done and dusted in a couple of days leaving the rest of the time free for fishing but you’ll find no better opportunity to get caked from head to foot in mud whilst being supplied with whisky laced tea to keep the inner man (or woman) warm.

It’s a great spectacle and all the bigger fish are weighed and photographed. This gives us more than a good idea on how individual growth rates are proceding.

Each lake has a monk, a masonary structure protecting a nine inch diameter overflow pipe. By lowering this pipe a lake can be drained. Small lakes take a few days to drain, the main lake takes a week or more. But I’m racing ahead.

On one occasion when we drained the main lake things were going exceptionally well and barely a quarter of the lake remained. Various syndicate members had been allocated specific duties and the key one of adjusting the height of the pipe had been bestowed upon Matt Hayes and Jason Cann. A ladder is angled against the monk and the overflow pipe tied to this, thus controlling the level it can run down to. 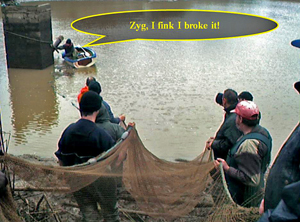 Each evening, Matt and Jason had to row over to the monk in a dinghy and re-set the height. With Jason swinging from the ladder and Matt holding the boat against it they were just in the process of lowering the pipe when it slipped out of the u-bend. To say panic broke out is not an exaggeration. If the water was to drain away in an uncontrolled manner hundreds of fish might die and Zyg’s business would be ruined.

Just when the guys thought things couldn’t get any worse they took a nosedive. Who should come stumbling through the trees but Zyg himself, dogs a yapping and a shotgun over his arm.

“You can just hold steady while I get a better aim at you!” He replied, pulling the shotgun into his shoulder.

I Think You’ve Had Quite Enough Sir! 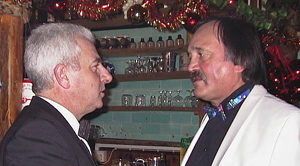 On another occasion we’d enjoyed a particularly successful netting. A good netting means the weather holds, the process is well organised and we’re done and dusted inside four hours. The record is a little over two.

On this particular day, those who felt inclined had gathered at the superb indoor swimming pool and Zyg had laid on several flagons of wine. It turned into quite a session and when the wine was gone we continued in one of the villas where many of the 5C’s members were staying.

Spirits are always high after a successful netting and the ‘craic is mighty’ as the Irish would say. But a thirst is a thirst and sometimes you do need to slake it with a decent pint of bitter so an adjournment to the nearest pub was suggested. 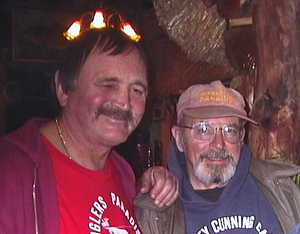 That’s how Neil Bryant a member of the England Sea Fishing squad, Brian Jackson, recently retired sports editor of the Daily Star and myself, three esteemed gentlemen, found ourselves in the Junction Inn, just up the lane from Zyg’s.

We piled in, three pints of beer were ordered and we continued swapping tales in high spirits. I swear there was only one other customer in the bar and he arrived after us, an old man who looked set to nurse the same old half pint glass for the next three hours. Perhaps we’d committed the mortal sin of sitting in his regular seat, I don’t know, but when I went to the bar to order three more pints of the landlords’ finest he looked at me sternly and said, “I think you gentlemen have had quite enough, I’d like you to leave now.”

And that’s how we became persona non-grata at the only pub in Halwill.

But the one netting that will stick in my mind forever is the one that we shall call Dion’s Mudlark. The day began like any other netting day. Someone nipped down to the lake before breakfast and made the final adjustment to the overflow pipe.

And Dion tagged along.

Now Dion is a big lad. Better make that BIG. He’s also enthusiastic and game for anything. So he should have known better than to wade into the softest silt patch in the lake. Soon he became well and truly stuck. The more he struggled the more stuck he became. 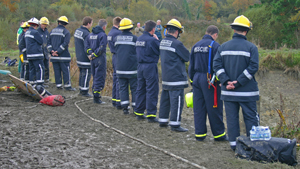 Oh, how we laughed. We even looped a rope round him, attached it to a quad bike and then attempted to drag him out. It was only when it seemed he would be decapitated that we realised this was serious. There wasn’t a chance in hell that we could get him out.

So the emergency services were called. 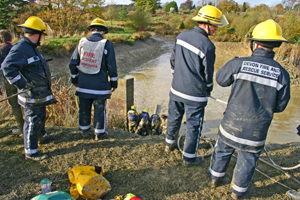 Now Devon, like anywhere else in November, does have it’s quiet days. Indeed, the whole of England had chosen this day to be quiet. News was in short supply. So the emergency call was invariably intercepted by the media. Either that or someone tipped them off.

It wasn’t long before a fire engine arrived, complete with full crew. And an ambulance. And a control vehicle. This was getting silly. 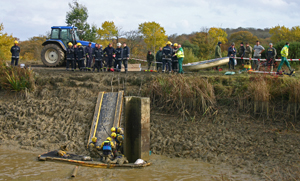 By now the first report had gone out on BBC Radio Devon.

Dion was a stick in the mud and the various attendees were breaking out all manner of equipment to free him. What looked as though it might take ten minutes was starting to drag. 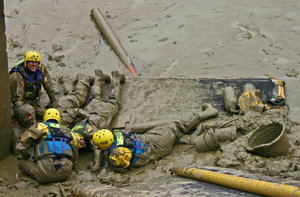 And Dion’s plight became an hourly update on the radio. And then regional stations across the country began running the story.

Would we mind keeping him in the mud until they could get a TV crew to us?

Eventually Dion was pulled free and hosed down by a rather attractive lady fire brigade person before being whisked off to hospital by helicopter. Yes, that’s right, we even had the air ambulance on site! 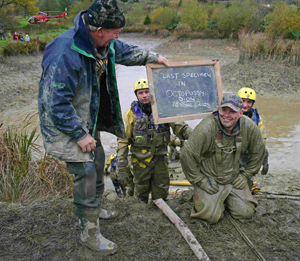 As luck would have it, Dion was okay and I sat in with him to give a TV interview after he returned from the hospital.

But it don’t half make you think how easy it would be to get into serious difficulties in some of the out-of-the-way places we like to fish. 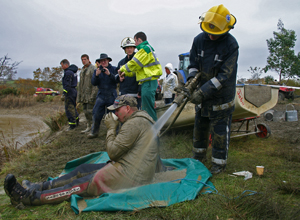 The 5C’s, with the kind patronage of Zyg’s customers, raise substantial amounts of money for charity each year. No prizes for guessing which charity received a four figure donation that year then! 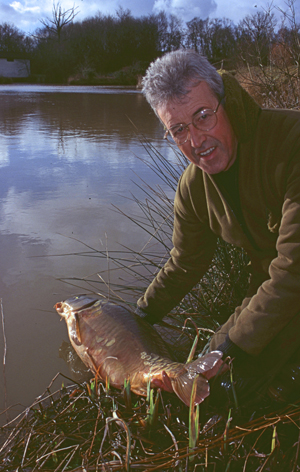 As fisheries go Anglers Paradise has always been kind to me. It has consistently provided me with cracking fish, especially in winter. In particular the week following the Valentines Party has consistently delivered the goods.

My routine was always the same. Socialise over the weekend and break out the rods on Monday when most of the partygoers headed home. Mostly I had the main carp lake to myself and without doubt the key swim to fish is the point swim just to the right of the Pagoda because it dominates a huge amount of water.

No need for a bivvy, I simply set up my bedchair in this Pagoda and left all my gear down there. With no-one around it was quite safe. In fact I’ve left my tackle unattended on most visits to Paradise and never had so much as a hook stolen.

During the day I’d take the wife out, pub lunches, walks on Dartmoor or the beach, back to the villa for an evening meal and then drop back to the rods for the night. I’d return for a late breakfast and the sequence would be repeated. 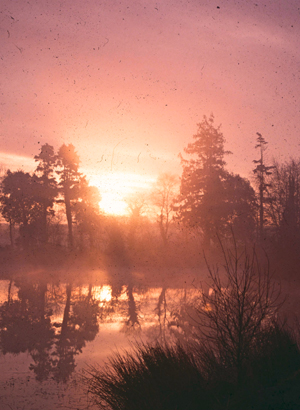 My tactics were dead simple, PVA bags containg pellets and broken boilies, single glugged bottom baits on the hair. The key was where you cast and this wasn’t in the margins or to either of the islands. All my fish came to baits in open water between the shallows and the deeper water at about 50 yards range. 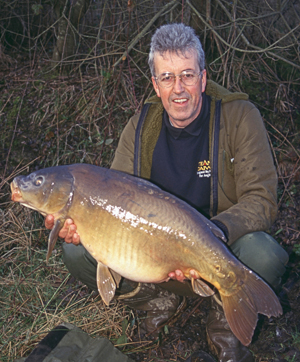 In three consecutive seasons I took the year’s first 20lb commons and mirrors. In one night alone I had a 26lb mirror, a 24lb plus leather and the lakes biggest common which bottomed out my 30lb scales. 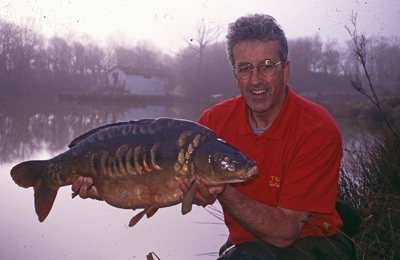 Winter fishing doesn’t get much better than that. 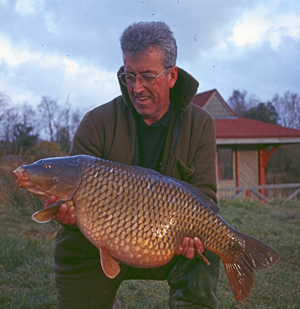 I treasure one set of slides that covers a single 24 hour period. It begins with a few carp before switching to shots of ponies in the snow on Dartmoor and then finishes with carp on the lake. It’s the only time that I’ve ever caught a dozen carp, including a grassie and thrown snowballs on the same day. Somehow I doubt the feat will be repeated 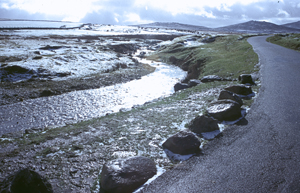 Incidentaly, if you place your cursor over the wintery Dartmoor scene above you’ll notice that the title Frame 30 appears. Go up to the top of Valentines Day Massacre and do the same over the carp on the right hand side of the page. You should see Frame 29 appear. These are consecutive shots from a strip of transparency film taken on the very same day. What further evidence do you need that Paradise has the potential to offer fantastic winter prospects? If I can do it, so can you.