What a method this is. When first revealed in print in the Complete Book Of Legering I imagine loads of readers lifted an eyebrow and promptly dismissed it as a waste of time. It was their loss because I still get approached by anglers who first read about it in the book, tried it and then had their minds blown. Yes, it defies logic, but you cannot ignore the phenomenal catches that have fallen to it. If you have never tried it, you should.

As there has been a thread running on Fishing Magic asking about the method I’ve decided to run this chapter of the book out of sequence in order to clear up any misunderstandings about the method.

(Please note: original text is in italics, recent comments have been added in normal case)

Sonny Probett is a chirpy Cockney who left his native East End behind for good when he married the Yorkshire girl he met on leave from the Merchant Navy. He now lives in Goldthorpe, near Barnsley, and devotes his spare time to fishing the thriving club circuit in that area. Over the years Sonny has won dozens of matches on the River Trent using a method he discovered and nicknamed the ‘dink dink’. Such is his confidence in the method that he often sets up three rods to fish a match on the Trent, all with variations on the dink dink theme. Most anglers, when shown the method, think that they are the victims of a joke, but there can be no doubting that, however crude and unconventional Sonny’s method may appear initially, it works like a dream. 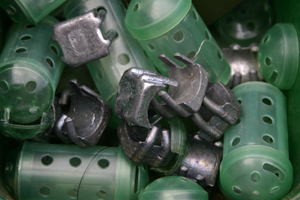 Anglers regularly fish the River Trent with 12oz bottoms and size 24’s hooks in an attempt to attract bites on one of Britain’s hardest fished rivers. Sonny Probett never fishes lines of less than 4lb breaking strain and his hook is a size 16’s. On to this he impales a single maggot. If he anticipates catching big fish, he will step this up to 5 or even 6lb line and, whenever possible, use an even bigger hook. Although that sounds unlikely, his highest match weight on the Trent during the 1991-2 season was over 50lb. On that particular day, Sonny fished a single maggot on a size 10s hook and a 5lb breaking strain line to catch mainly chub. His method has accounted for just about every different species that swims in the Trent, including a surprise tench of 4lb 12oz.

When I was first told about the method, my reaction was one of disbelief, but a session on the tidal length of the River Trent saw me trying desperately to connect with dace bites that were proving particularly exasperating. With nothing to lose and no one around to poke fun at me, I tried out Sonny’s dink dink for the first time. The transformation was remarkable. Before long I was catching dace the size of herrings on almost every cast.

Sonny has used his method for twenty years and several prominent matchmen have added the weapon to their armoury, but at the moment its use seems restricted to anglers from quite a small area of South Yorkshire. One of the finest exponents of the method on the open circuit is Gary Jubb. I well remember his horror when a photograph appeared in the press showing him netting a bream at Hoveringham during a Super League match. Gary won the match with about 40lb of fish and his alarm was caused by the fact that the top-secret dink dink rig could be picked out clearly on the photograph.

Some time afterwards, I watched him practising for a round of the Octoplus League at Fiskerton. Gary had put over 20lb of chub into the net, employing the dink dink, while on the very next peg, Wayne Swinscoe, undoubtedly one of England’s finest river anglers, struggled to catch 5lb on conventional feeder tactics. A graphic example if ever there was one.

Rigging up the method

The dink dink is set up initially with the feeder running free within a single 9in loop. Instead of cutting off the spare ‘tail’ of line at the loop knot, this becomes the hook length itself. To this hook length a size 16s forged hook is tied direct, between 1 and 2in (2.5 to 5cm) from the knot. This then completes the rig. The length of the loop can be increased to as much as a couple of feet if you like, depending upon how the fish are feeding. 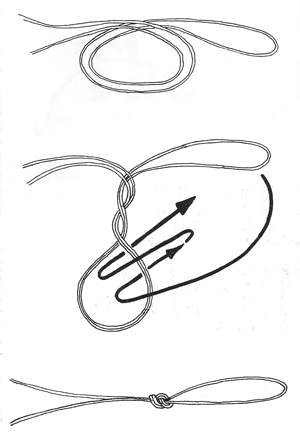 Diagram: Creating the ‘Dink Dink’ loop (Note:  the swimfeeder has been omitted for simplicity)

Of vital importance is the knot used for making the loop (see the diagrams). Thread the feeder on to the line and fold a 12in (30cm) length back on itself. Form a loop in this and then twist that loop clockwise twice. Now put the feeder through the loop twice in the anti-clockwise direction. Wet the line and tighten up the knot. As you do so you will see the knot form a figure-of-eight and when it is tightened fully, the hook length line will actually point up and away from the knot. If you fail to master this knot you will be rewarded with lots of tangles.

Revision Note: Another ‘tether’ rig, I’m afraid. Fear not though because there are many different ‘safe’ ways to create the rig, although none really create the short ‘stiff’ rig pointing away from the feeder. The simplest way of creating the effect is to adapt the carp anglers’ helicopter rig. Thread a sliding rubber float stop onto the reel line followed by a small hard bead, a stainless steel ring, a second hard bead and another float stop. A short hook link is tied to the stainless ring and the whole arrangement can be slid to whatever distance you like above the feeder which is tied directly to the end of the reel line.

The dink dink is cast directly out in front of the angler and fished with the rod propped high in the rests facing the feeder. As the feeder hits the water, sweep the rod behind you, trap the line on the spool and follow the feeder down with the rod until it hits the bottom. Bites often occur just as the feeder touches down, so be prepared for them. If a bite does not come immediately, feed a few feet of line to the feeder and put the rod in the rests. There is no requirement to balance the feeder and Sonny Probett uses a 2oz feeder to start with, wherever he fishes, unless this will not hold. It is well worth noting that he also uses a stiff tipped rod as well for the fish to hook themselves against.

The dink dink is an attacking method of the first order and a high work-rate is crucial to its success. As soon as the feeder is empty, it must be reeled in and recast. Continual feeding is the key and it is not unusual to use as much as a gallon of maggots during a five-hour contest. The large hook gives a great advantage when playing fish and smaller fish can be comfortably bullied in quickly.

One drawback is that a fish comes to the net in front of the feeder. On a conventional rig the feeder is lifted clear of the water when netting takes place, keeping it out of the way of both the landing-net and any under water obstructions. On the dink dink it is beneath the fish and care must be taken not to knock off the fish with the net. If you are unlucky to snag up with a hooked fish, it will invariably be the feeder that is caught due to the very short hook link. Simply put the rod back in the rests and let the fish lift the feeder free for you. This rig gives you a better chance of freeing snagged fish than most and should be seriously considered on any snaggy peg. It also comes into its own in weedy swims where it gives you the opportunity to hold the bait above soft weeds.

Why the method works

It is clear that the hook-bait is presented off-bottom on the dink dink and this matches the theory that the craftier fish on Britain’s rivers have learned that a stationary bait fished hard on the bottom spells danger. Some maggots inevitably burst out of a feeder when it hits the surface and others escape on the drop. This means that there is a constant trickle of maggots falling through the water which are intercepted by those fish that are shy of feeding on the bottom. Those fish dashing around the swim competing for these baits cause continual underwater swirls and currents which actually cause maggots to rise up from the riverbed as well. If you try feeding maggots to goldfish in a garden pool, you will see exactly what I mean. Activity like this puts your maggot in exactly the right place to be taken. I am unable to explain why fish will take a single bait on a 16’s or, for that matter, a 10’s, but it is a fact that they do. We have to capitalise on this for however long it lasts because there is no point in using smaller hooks than are absolutely necessary.

Bites require no hitting on the dink. Sonny’s own description says it all: ‘When a small fish takes, it goes dink dink.’ His index finger wiggles: ‘When a big ‘un grabs it, it goes “whoosh”’ and his arm dives forwards. “There’s no need to strike, just a simple lift and they’re on. When a fish picks up the bait, it picks up a 2oz feeder – how can it avoid being hooked? Alternatively, if a fish just plucks at the bait without lifting the feeder, then the stiff rod-tip comes into play and sets the hook.’

What else can I say about a method which is so unusual that most anglers reading this chapter will never try it? But if you do try it, you might get the shock of your life. Brian Webb did. He was a member of the Keenets South West team competing in the 1992 NFA  1st Division National Championships held on the River Trent in October of that year, a match contested by over 1,000 of the country’s best anglers. It was my privilege to coach his team and after establishing which area he had drawn in, suggested he set up only one rod, and fish the dink dink. Brian had used the method just once in practice but it was enough for him to paralyse his eighty-eight peg section and finish fourth individual overall. What could better illustrate the potential of this method? 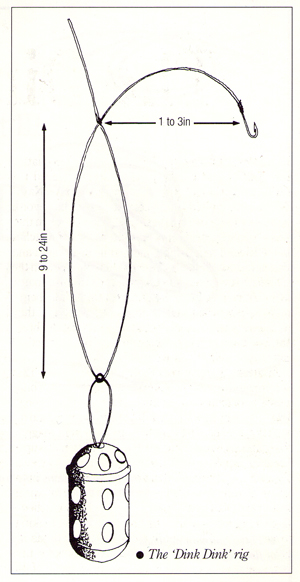