Well, That’s January done and dusted. I’d better re-name this blog Early February! Weather’s picking up though and the fish are biting again. How good is that? 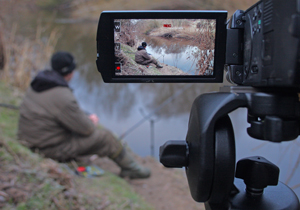 And how are your new year resolutions going? Are they in tatters yet? I’m proud to say mine is going strong. This year I decided that life would be a lot better and more serene if I gave certain individuals a wide berth in future. As tempting as it is to read their delusional Internet posts I decided not to bother reading them again. Let them trade their cheap insults with each other because in all fairness no one really cares and appart from trading insults with me, what exactly are they well known for. Seriously, what do they do? So I’ve moved on. I’ve got far better things to do and can use that time constructively.

It’s taken a fortnight but the installation of a new kitchen has run its course and I can finally trade jobs from being a ‘tea boy stroke supervisor’ to being an angler again. Talk about cage fever. It’s now time to get serious about making the next bunch of DVDs. Saturday saw Stu and me heading up to the River Swale. The intention was to get there while it was still pitch black and film in the dark so we were on the road at an ungodly hour with the temperature gauge registering minus four. It would have been so easy to be pesimistic…

When we arrived at the river there was ice in the margins. We decided against checking the water temperature. After all, it could only confirm our worst suspicions. 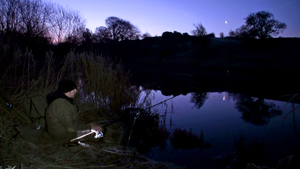 Filming during daylight is far from easy but filming in the dark, when you need to get the horizon level, is a whole lot trickier, made doubly difficult on a two camera shoot. But we managed it. What’s more we had some cracking fish to boot.

I’ll not spoil the whole story but two specific methods were on the agenda, one involved legering with an unusual bait, the other a crude float method. You know us, we always film the actual bites, in sequence – none of that Tom Fool trickery you’ll see on some DVDs with the false bites and randomly clipped together sequences to try and deceive the viewer. 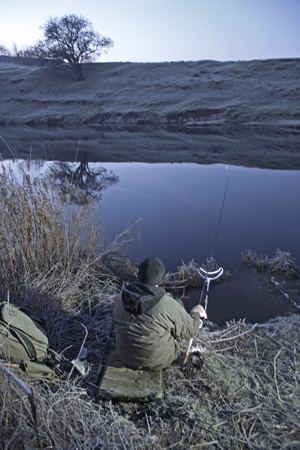 Well, filming a quiver tip isn’t exactly the kind of challenge to stump a rocket scientist but filming a float bite from a chub on a swiftly flowing winter river like the Swale requires a degree of faith (that you’re actually going to get a bite in the first place). You try tracking a float on its path down a swim and try to keep the bright red tip slap bang in the centre of the screen with a smooth panning motion. For a start, as the float travels away from the camera the pan rate has to be slowed down. If the angler mends his line you find the float apparently moving upstream. It’s the same if he slows it down in any way. And despite setting the tripod perfectly level the nature of the swim’s vegetaion and flow means the float starts off in the centre of the screen but as you pan round it heads up towards the top corner of the screen so you have to compensate with a horixontal pan and a simultaneous pan up, and all without a single jerk. It doesn’t help when you’re also shivvering. 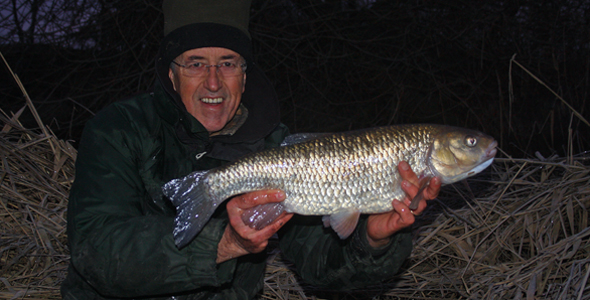 Tough? You better believe it. I was tearing my hair out at times but we got the bites we wanted on film and more importantly the strike – you know what I mean – the k-e-r-lunk(!) moment when the rod’s sweep meets the solid resistance of a fish, the red tip jerking proud in a flurry of spray only to be suddenly suddenly jagged back beneath the surface. 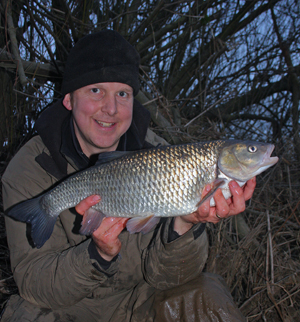 The day was a triple whammy because we’d intended to fish alone but a desperate call from james Gould just after dawn revealed he’d gone to fish for pike on the Stainny Canal only to get there and find it frozen over. How was the Swale looking? Ninety minutes later he had a couple of deadbaits out in a swim just upstream from us and he plucked out this plummy pike in next to no time Of course it would have been rude not to film it. 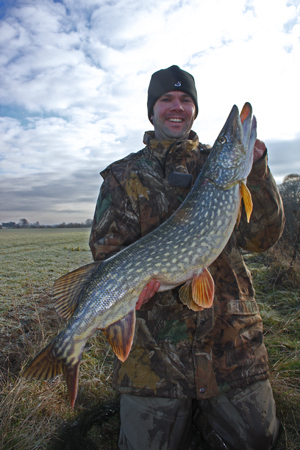 Despite the sun shining brightly it was midday before the frost showed any sign of lifting and it never actually shifted from the hollows. We actually needed to be rid of the frost as Stu had filmed certain scenics a week earlier when the river was in flood. We needed to re-shoot the exact scenes at normal level to illustrate the nature of a spate river like the Swale.

Whilst hanging around I spotted a rather pointless sign. Indeed I’ve collection of photographs shot at places around the world depicting ridiculous signs and obligatory stuff like ‘slippery when wet’, and, ‘don’t spit get fit’, but I would challenge anyone to come up with a better one than this.. 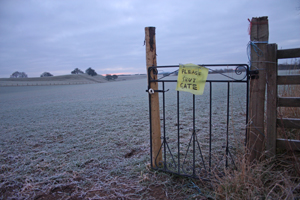 It’s a bit early, I know, but if anyone fancies coming along to one of my live shows then I will be appearing at a charity bash in Bedfordshire on March 28th. It’s at the Holiday Inn, Sandy, close to the A1 and should you fancy staying over the hotel is offering special rates on accommodation. It’s an annual event and previous year’s turn-outs have been pretty impressive at upwards of a couple of hundred souls.

I’ll be delivering the show a few of you will have seen – it’s the one that Stu and I gave in aid of Help For Heroes in Nottingham although there might be a bit of a tweak, depends if we have time after returning from a little adventure we have planned…

Anyway, rather than type out the detail, here’s the poster which advertises the evening: 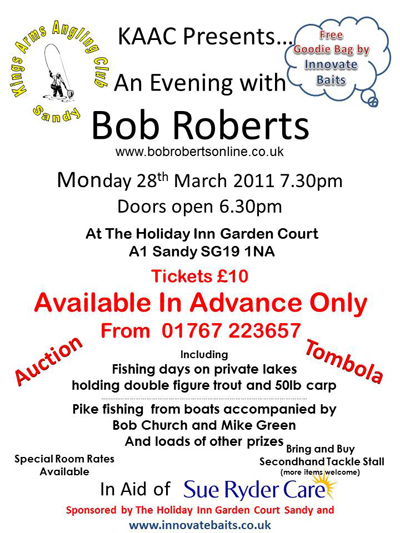 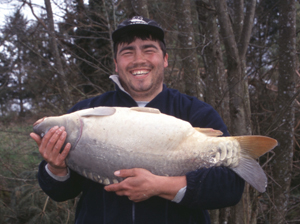 Or Maybe It’s An Allan Thing…

I’m sure I’ve related the tale before about an hilarious trip that Allan Parbery and I shared a few years back when we fished Milstone Pool, not a million miles from Limouge, France. I impishly convinced a young lad, who also happened to be called Alan, that if he was going to have his picture taken with a carp caught by his fishing partner that the done thing was to hold it upside down.

Allan (P) backed me up on this with a straight face and so convincing were we that the kid fell for it, hook line and sinker. Of course we maintained our serious faces for as long as we possibly could but raucous laughter would errupt each time we indulged in a glass of wine thereafter.

It’s the kind of daft thing lads do when they’re on holiday and not taking the fishing too seriously. 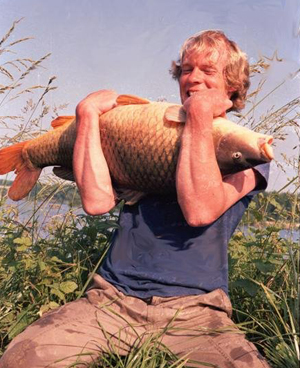 Imagine Allan (P)’s surprised when 15 years later I introduced him to the same young kid in the bar at Anglers Paradise, Devon. Old Al was gobsmacked, and not just because the younger Al didn’t look a day older. Of course we all had a giggle over the incident and no feelings were hurt.

However, what none of us appreciated was that Allan (P) has previous. In fact he probably thought the evidence was dead and buried, long ago, and that his secret would go to the grave with him.

A mutual friend has given me this item of incriminating evidence. It shows a young Mr P with flowing golden locks (I’ve never known him less then folically challenged since we met many years ago on the banks of Haversham Lake) but here’s proof that he did once have hair – even if it is a bit like a girl’s!

And guess what – look how he’s holding that carp. Could these two Al(l)ans be long lost brothers…? 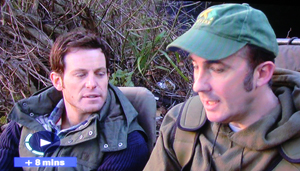 It was nice to see Lee Swords finally achieve one of his dreams and appear on National TV. Especially as it was on BBC’s Countryfile rather than on Jeremy Kyle. Maybe it’s to do with the backlash over the programme losing an industrial tribunal and it now has to be seen as employing a few old tarts on the show!

The programme focussed on the now much cleaner Sheffield environment. Fifty years ago Sheffield was one of the dirties cities in Europe – even dirtier than the Arsenals and Leeds United of that era…

Today the city is rejuvenated and to prove the point Lee caught a trout to order on his very first cast. He also hammed it uop well and I guess Teme Severn Baits will have been pleased to see their logo broadcast to the nation on Lee’s cap. That’s quite a result you know. When I appear on Sky I am not allowed to wear any branded clothing whatsoever. 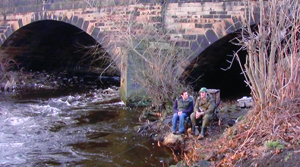 I’m seriously pleased they chose a down to earth character like Lee rather than some plummy ‘fluff chucker’. It gave the piece authenticity. But how on earth did he manage to pull it off?

Well, as daft as it seems, the BBC chose Lee. Having read a piece he wrote about the Don for the Angling Star they presumably tracked him down via the DVSG web site and, as they say, the rest is history.

Maybe the Tidal Trenters will now relent and invite him to join….

Which reminds me. Whatever did happen to the Tidal Trenters?

Is That A Spelling Mistake I see?

Probably not. The ABoF has launched its new online barbel magazine – Riffle – and a jolly good first attempt it is, too. Edited by former Barbel Society Secretary Dave Burr, I have to say he’s made a decent fist of the launch issue as you can see from these screen shots… 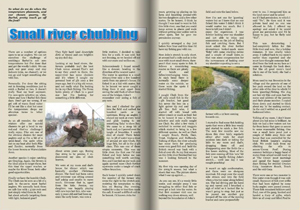 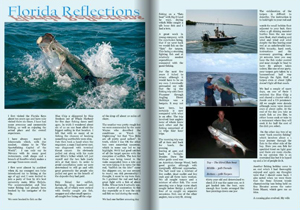 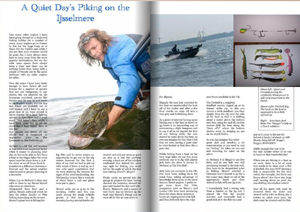 You can even read this magazine online for free, but if you want to see any more then you’ll have to subscribe. Decent value for a quid, mind.

Oh well, that’s all I’ve got time for. Fishing and filming again tomorrow and I need to sort out some gear. It’s a hard life!