Angling Now And Then 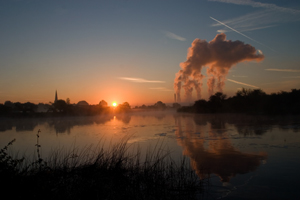 Weds 14th December, 1983
River Derwent, Borrowash
Change in the weather again. Overcast, Southerly winds gusting to gale force. Air temperature up around 8 degrees C. River around a foot up, water cold with some melting snow, some colour.
Dropped in two swims below bridge – completely sheltered. Caught 62lb of chub with three roach (biggest over a pound) on waggler and maggot. I fished very well, catching steadily all day without the fish really going mad. Never missed a bite. Pulled off a few though.

Mon 26th December, 1983
River Trent, Hull water, Winthorpe
Beautiful day. Strong wind off our backs, broken by thorn thicket and umbrella. Sun shone all day on our fronts. It was like September again.
River has dropped 2 feet but is still coloured. Two days should see it perfect.
Fished feeder all day. Caught a gudgeon and an 8oz chub early on then it went very quiet. Changed from a 16 forged to a size 20 Au Lion Dor 1206, single maggot and started getting bites straight away. Caught a skimmer, a hybrid, a dace and a few gudgeon, then, in the last hour, a 3lb chub followed by a 3lb bream to round off a pleasant day.
I would probably have done better to fish a swan shot link and loose feed as I was fishing fairly close in, in shallow water. A feeder does not really allow you to search a swim.
River too high to get near the island.

Thurs 29th December, 1983
River Trent, Hull water, Winthorpe
The ‘heatwave’ continues. Fairly strong downstream wind. River has dropped a further 18 inches and is now running clear – at last! Today we should have been rewarded for our persistence over Christmas but fate kicked us in the teeth. Virtually every peg was taken when we arrived and we were able – only just – to wade out to the island. I fished in a washing machine of a swim with a large bush, half submerged at the bottom end.
By placing a feeder in front of this I picked up a nice chub of nearly 2lb and three gudgeon on red maggot.
Unfortunately I hooked half a dozen fish that I just couldn’t handle. Hooks straightening out, pulling out, snapping, snagging, etc. These were animals! I only saw one and it looked to be a chub of at least 4lb.
I struggled to get a bite using a size 16 hook but switch to a 20 and single red maggot and it was a different story. Caught my first fish at noon – packed up before 3pm in total frustration. It seemed pointless to carry on.
Must look into small forged hook patterns.

It’s interesting to note that twenty years ago a 3lb chub on the middle Trent was regarded as an exceptional fish, as was a 4lb bream. How different things are today. The other thing is we caught our fish in daylight. And there were still some gudgeon around.
Most telling tactically was that we fished one rod without a bite alarm or a hair rig and maggots were the number one bait choice with narry a pellet in sight.
It didn’t seem to matter what the conditions were like, we’d usually get a few bites, and it’s only when you get bites that you can you can develop and address tackle improvements. Don’t forget, we were regularly dropping down to pound and 12oz bottoms back then when using small hooks.
Who does that these days?
Typically, now, when I fish a river in winter it’s not uncommon to be blanking right up until the witching hour and then I might get a big perch (if that’s what I’m targeting) as the light fades or if chub are the target a last gasp pull. Only staying on into the dark for a couple of hours appears to greatly improve the chances of a few decent chub and that certainly gives me no incentive to go claiming ‘hot’ swims an hour before daybreak.
And you know what? Unless I’m missing something, most of the winter anglers I bump into out there are struggling, too, and they’re mostly on the wrong side of fifty-years-old. That’s why I fear winter fishing on rivers is not just on the wane, it may well be doomed. Let’s face it, where are the kids? On the commercials, that’s where.
Before long you’ll not even be able to buy a stick float rod that will handle 12oz bottoms and size 22 hooks. It’s difficult enough as it is to get decent stick floats and when did you last see a bait apron for sale?
It’s a scary thought.