I’m fortunate to have lived through a great era in angling and during that time I’ve met and frequently fished with many, if not most of the greats yet today you’re hard pressed to know who the greats are. Some would lay the blame for that at the door of social media. Certainly angling is in a state of change, change that has robbed us of the true personalities in our game. I’m sure they’re still around but most of what we see today comes across as an act of desperation. Anglers want to be ‘liked’ all the time or they’re blatantly trying to promote or sell you something. Communication used to be about skills or entertainment. Indeed some of my favourite anglers were utterly rubbish (or at least very limited), but they wrote great tales of epic failure – Sid Huggins and Richard Wade to name but two. And what about the memorable series like Shining Times, or Tales of Tydd Gote? All gone, to be replaced by 50 Ways To Cast A Pellet Waggler and various other simplistic how-to ‘articles’ that appear to have been lifted from the pages of Angling For Dummies rather than mined from the psyche of gifted individuals.

Billy Makin was a legendary canal angler before he launched Makin’s Fisheries, virtually inventing the model for modern commercial fisheries. He was no slouch on other venues, either, but above all else he’s one of the most entertaining and fun guys it has ever been my pleasure to meet and unlike most other leading names he is able to write rather than having to rely on journalists to ghost his stuff. He’s currently running a bar in Thailand of all places but that has given him the time to write and publish  a book called Fishing and Testicles. Obviously with a title like that you’re not going to learn how to tie a grinner knot but it will definitely leave you grinning and it’s exceptionally good value for just a tenner. 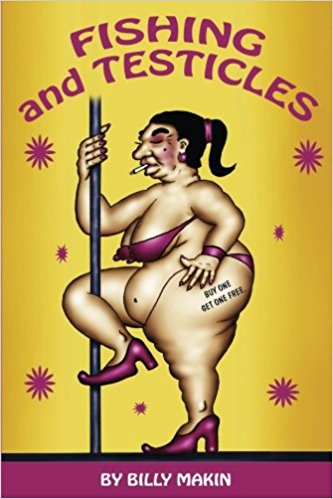 To give you some idea of how the bloke writes he’s allowed me to use a handful of short articles he’s written that do not appear in the book. Here he is describing how Ivan Marks taught him to catch bream. Read it and tell me if, in just a few short paragraphs, you didn’t learn something…

A MASTERCLASS FROM THE MASTER (Part One)

I suppose that the time would be the late 70’s, the venue was Attenborough gravel pits, and the swim was number 29, smack bang in the corner of Sandy bay. The match of course was run by Steve (RIP OFF) Toone, who like Pat O’connor, is owed a great deal of gratitude for the job that they both did.

Now for anyone who has never experienced the following phenomena, it will be difficult to believe, but the peg simply had too many fish in it, the fish in question being big, beautiful, slab sided bream. This was in the days before carp had been invented.

Having been brought up on the Lancashire canals, any bream above 2lb, would have seen a television crew rushing to the venue to film the captor.
I was way out of my depth; every time my lead hit the water, the quiver tip went berserk, and after 3 hours, I had managed 3 fish and had become a nervous wreck, when salvation arrived in the form of the master himself – Ivan Marks.

Ivan sat behind me, grinning, as he watched the pantomime, until he couldn’t take it any longer.

“For God’s sake Bill” he said. “Do you want me to show you how to catch bream”?

No-one could possibly refuse an offer like that from the world’s finest bream angler, so I nodded.

He took out a packet of size 12’s hooks and told me to tie one on, and lengthen my hook length to 6 feet. Size 12’s hooks were for hanging slabs of beef on at the butchers, but I wasn’t going to question the judgement of my hero, so on it went, on went 2 worms, and out into peg 29 went the lot.

Immediately, the quiver tip started to dance, and as I made a grab for the rod, Ivan whacked me across the knuckles with a stick.

“Strike when I tell you Bill” he said. “Now take your hands away from the rod, and sit on them”.

I now had to endure 5 minutes of torture, as the quiver went berserk, and every time I reached for the rod, down came Ivan’s stick onto my knuckles. Eventually, the tip went round, and the reel began to spin. “Lift now” Ivan said, “but don’t strike”.

A 4lb bream was soon in my net, followed by several more, until at the final whistle, I had 60lb, instead of the 20 that I was heading for.

The next day, I rang in work, and booked a week’s holiday, and for the next 5 days, I traveled to Attenborough, and fished peg 29, putting into practice, a lifetime of Ivan’s knowledge, which I had been blessed with in no more than 2 hours.

Blow me, the next Sunday, I again drew peg 29, and the Sunday after.

One of the Nottingham lads who had seen me practicing for a week, and then drawing the same swim 3 weeks on the trot, remarked. “Is Toony shagging you Bill?

“Of course not” I replied indignantly, “But if he lets me draw peg 29 again, I might let him”.

A MASTERCLASS FROM THE MASTER (Part Two)

As a few people seemed to enjoy my posting, I will now reluctantly complete a little more of the story, After the 3rd win at the Attenborough peg 29 aquarium, I found myself suddenly elevated to the status of an ‘A’ lister.

For people of a more recent vintage, at the time, it appeared that fishing was on the verge of taking off. Every other week, there was a match, massively supported by a sponsor, and 20 or so of the country’s top anglers were invited. I had now become one of the select few. My fishing cap was now way too small, my head having assumed the size of a small country. I had arrived.

I had now done the impossible treble in three weekends, and was sat at my swim on the private bank at Coombe Abbey.

All around me were magic names – Kenny- Ciive – Denis – Kevin – Robin – Roy, and of course, the master himself – Ivan Marks.
When the starting whistle went, I went into meltdown. What on earth was I doing in such company?

Two pegs away was God himself, Ivan. Why had I so stupidly wasted a day’s holiday from British Gas. I was much too far in over my depth.

Reality kicked in, and a whole lifetime of knowledge, forced into me by Ivan in those two short hours , flashed before me.
For 5 amazing hours, Ivan and I matched each other fish for fish.

The scales decided the issue. Ivan weighed in 48lb, and mine magically topped it by 4 ounces.

At the presentation, I floated on air as I collected my cheque for 1000 pound. There are no prizes for guessing who was the first man to congratulate me. Ivan not only shook my hand, but he put his arm around me in the most genuine gesture of affection I have ever seen.

I would have willingly ripped the cheque into a thousand pieces if I could have only frozen that moment in time.

Pathetic as it may seem, I am now typing this with tears in my eyes,

A MASTERCLASS FROM THE MASTER (Part Three)

What started out as a posting seems to have developed into a mini-series, however I will continue with my reminiscing.

I have to go back to part one of the saga, and explain what really happened during the unscheduled, yet positively essential learning process from the master himself.

At the point where Ivan entered the scene, I had become a wreck. My hands were trembling, and my heart beat was well into three figures. Not only had I never caught bream on the canals of Lancashire, I had never even seen a bream of over 2 pound, and here I was, sat on several hundred of the blighters, and I hadn’t a clue what I was doing.

I have already described the set up that Ivan advised, and was surprised to learn that it was prescribed for two reasons, the most important of which was for my benefit and not for the fish. He had to calm me down, otherwise my confidence would be shattered.

Ivan continued to speak, and slowly at first, the trembles eventually faded. Without realizing it, a succession of 4lb bream were beginning to fill the keepnet, and Ivan’s lifetime of knowledge was beginning to fill my head.

From now one, the rest of the piece is in my words, however you have to remember that the events were well over 30 years ago, nevertheless the sentiments are those of the Master.

Imagine spreading a few slices of bread on the garden. It may take an hour or so, but eventually a sparrow will appear. If you disturb that sparrow, it could easily be a long time before the next one arrives – if you do not disturb it, the garden will soon be full of sparrows. “Bream are just like that”, Ivan said. “Allow them to settle before you start to catch them”.

My fertile mind traveled back many years. As a lad, in our coal mining village, we had what we called a “Knocker Up”. This was a little old chap who went round the miner’s houses, usually around 5 in the morning, and using a length of bamboo poles tied together, tapped on the miner’s windows to wake them up for the early shift. When fishing, if we caught an early fish and couldn’t get another bite, we used to say that we had caught the “Knocker Up”.

Bloody hell – things were beginning to fall into place.

Take the “Knocker Up” out of the equation, and the miners overslept – disturb the first sparrow and the rest of the flock will not appear – catch the first bream in the swim and —– you can finish the rest.

Think about that for a while. Now go back to the canal days. Only a fool cast out a waggler or pushed out the pole to the far bank as soon as the match began. You needed the fish to settle – you needed to build up their confidence.

You most certainly didn’t want to catch the “Knocker Up”.

So there you are. If you want to read more pearls of Billy’s wisdom, simply click HERE.