For me it began with a phone call from Len Gurd, ‘Have you ever been to Anglers Paradise?’ I’d never heard of the place. ‘I’m going down there to do a bit of filming. Would you fancy coming along?’

The rest, as they say, is history. I have been back so many times. So many parties, drunken celebrations and good times. Indeed it’s like the line in the Eagles’ Hotel California, ‘You can check out anytime you like, but you can never leave.’ Three or 4 times a year I get Zyg on the phone, ‘Why haven’t you been to see me lately?’ I offer excuses but the draw is compelling. Nice place, nice people, crap phone reception. My idea of heaven.

And now the history of Anglers Paradise has been committed to a book in a series of tales told through the eyes of the good and the great who’ve fished there. It should make for a fascinating read. Speaking personally I could have filled half of the book with tales rather than just a chapter, although you might not have wanted to read some of them! 😉 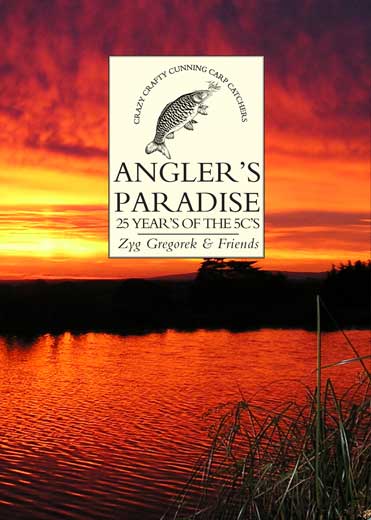 This is the foreword by Peter Mohan

One day in the Spring of 1981, my telephone rang. This was hardly unusual, as I was Secretary of the British Carp Study Group and the Carp Anglers Association, and was receiving 3,000 telephone calls (and 10,000 letters) a year.

Both the caller and his subject were unusual, however – a gentleman with a slightly foreign accent who wanted some help, as he’d bought a 5 acre hole in the ground – an empty lake, in the wilds of Devon. Would I go and have a look at it?

As it happened, I knew the lake; it had a huge leaking earth dam at one end, there had been no water in it for 100 years, and the locals said the dam could never be repaired.

A few days later, I drove from Bristol to Okehampton, and then up the pretty road towards Hatherleigh, with High Wilhays, Yes Tor, and the rest of Dartmoor on my left. After ‘proceeding’, as the police used to say, down a long, rough track, full of watery potholes (which cried out to be stocked with fish!) I got near the end of the track where there was a large house, with numerous outbuildings surrounding it. The owner was in the garden: Polish and called Zyg. It was immediately apparent that he was an unusual character. Dressed like a Western bandit, he had a bandolier of bullets around him, a shotgun and not far away a donkey cart, complete with donkey. 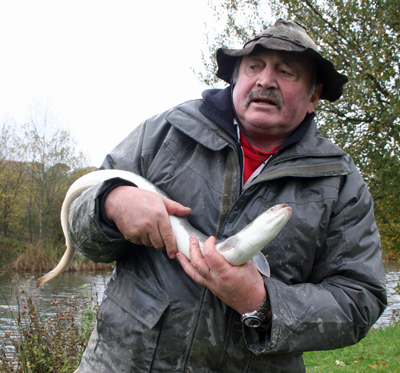 It turned out that he owned only half the house, a wet, steeply sloping field – and the empty lake, with the base of an old boathouse. I told him what the locals said. He looked at me with a steely glare.

After an afternoon in his company it was obvious that he meant what he said. I could see that underneath his eccentricities he was highly motivated, determined, with a charismatic personality.

I offered to run the fishing, I gave him lots of advice, he took it all in – and then went on with his own plans! This was Zyg’s empire, make no mistake about it, and he would succeed; by the time I left, I had no doubt about it. He was highly intelligent, well educated, and a born leader.

Fortunately, he was not alone: he had the traditional ‘good woman’ behind or rather beside him. Bright and beautiful, Rose was clearly an undefatigable person with a steady, even character to complement Zyg’s ebullience.

After that day, I drove back to Bristol thinking that I had met someone really remarkable; someone who talked a lot, but who would do it as well, and would succeed. 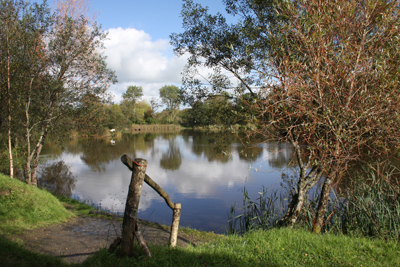 We became friends, and I made many visits, staying in the Wishing Well at Zyg’s invitation. I played table tennis and other games with the three pretty daughters, Anna, Wanda and Zenia. I admired the Vietnamese pot-bellied pigs, the emus, and the ever-patient donkey, but avoided Zyg’s little snappy dogs; I’m allergic to dogs. The animals have changed, but Zyg hasn’t!

We held CAA meetings in Zyg’s fabulous African bar, I had my holidays there – not fishing, but travelling round the beautiful N. Devon countryside.

I was able to help Zyg a bit, with publicity for Angler’s Paradise through the BCSG and CAA, and I frequently mentioned him in the magazines I edited. Zyg held a fish-in on the big lake one year, and he took me and my tackle down in the donkey cart. I fished in the top storey of the boathouse, 10 feet above the water, with the late Gerry Savage. We caught nothing, but Zyg, fishing below us did: I swear he baited his swim with Devonshire cream and cider – and his own abundant homemade wine. Even I, a teetotaller, had to have a drink with Zyg – it would have been an insult otherwise. 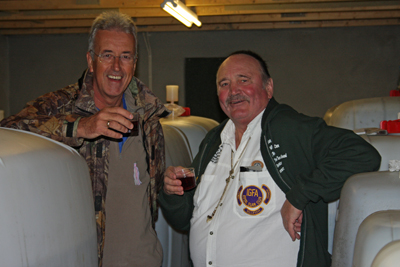 Ann and I had many happy holidays there, and took Zyg and Rose out to a meal when we could. When it was my turn to pay once, Zyg took us to a famous hotel so expensive that I almost had to take out a mortgage to pay the bill! I told him that next time we were going to the Okehampton fish and chip shop.

The site was developed. I told Zyg his field was too steep to build lakes in – so he filled the field with lakes! He bought more land and created day ticket lakes, followed by yet more land and a match fishery, then a trout lake. He bred and sold fish in his own private fish farm. Families from all over the country came to stay. Top carp anglers fished the lakes and I told them stories of the old days in the bar.

I had been right from the beginning about one thing: he would succeed. From half a house, a wet field, and an empty lake, he now has 38 villas, 30 lakes, and owns half of west Devon: no I mustn’t exaggerate – he owns only 250 acres. 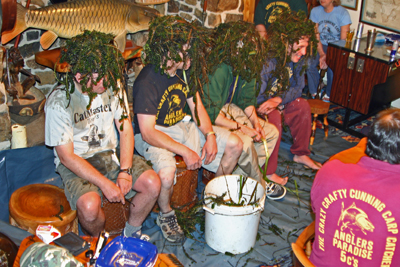 The lakes on the Anglers Paradise site are kept for residents only, though he formed the famous 5 C’s syndicate to fish the main lake. He made me an honorary member, which was fortunate as old age and infirmity absolved me from its frightening initiation ceremonies! This is, of course the most exclusive syndicate in the country, with happy members if they survive the tightrope acts over water, and the quantities of weed stuffed down their necks! Each member gets, I understand, 1,000 gallons a year of Zyg’s potent, powerful famous home-made wine – oh, sorry, too many noughts (I must have been at the wine myself); I think it must have been 1 gallon! Even thinking of this extraordinary liquid, distilled by Zyg in huge vats which fill a large building, make me feel somewhat inebriated. I never did find out what the ‘C’s’ stood for – I daren’t ask. 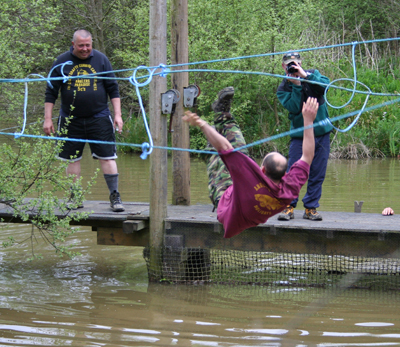 Zyg himself caught the first 30lb carp from the complex – Len Gurd was a witness, – and all the members get excellent fishing. Catfish are now over 40lbs, and there are huge tench, orfe and other species. All the fish are home grown British, and put in at small sizes. Zyg grows his own big fish; he doesn’t stock them. 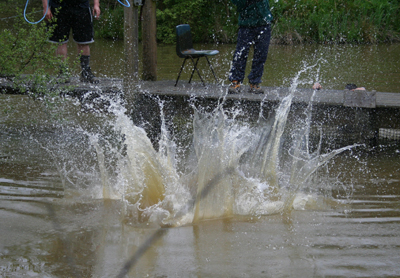 The success of Anglers Paradise comes from hard work, a vision of the future, and from ploughing any profits back into improving and extending the estate. Its many awards show its recognition throughout the tourist industry in this country.

Are Zyg’s ‘occasional’(!) eccentricities assumed for effect? I’ll leave you to work out that for yourself. All I can say is don’t let them distract you from that keen mind behind it all. Don’t try to outthink him; you won’t succeed.

Just admire the most remarkable success story in connection with angling that this country has ever seen.

Sadly, old age and a 500 mile round trip from Bedford mean I don’t get to the 5 C’s or Anglers Paradise now – but I miss it all; I really do. 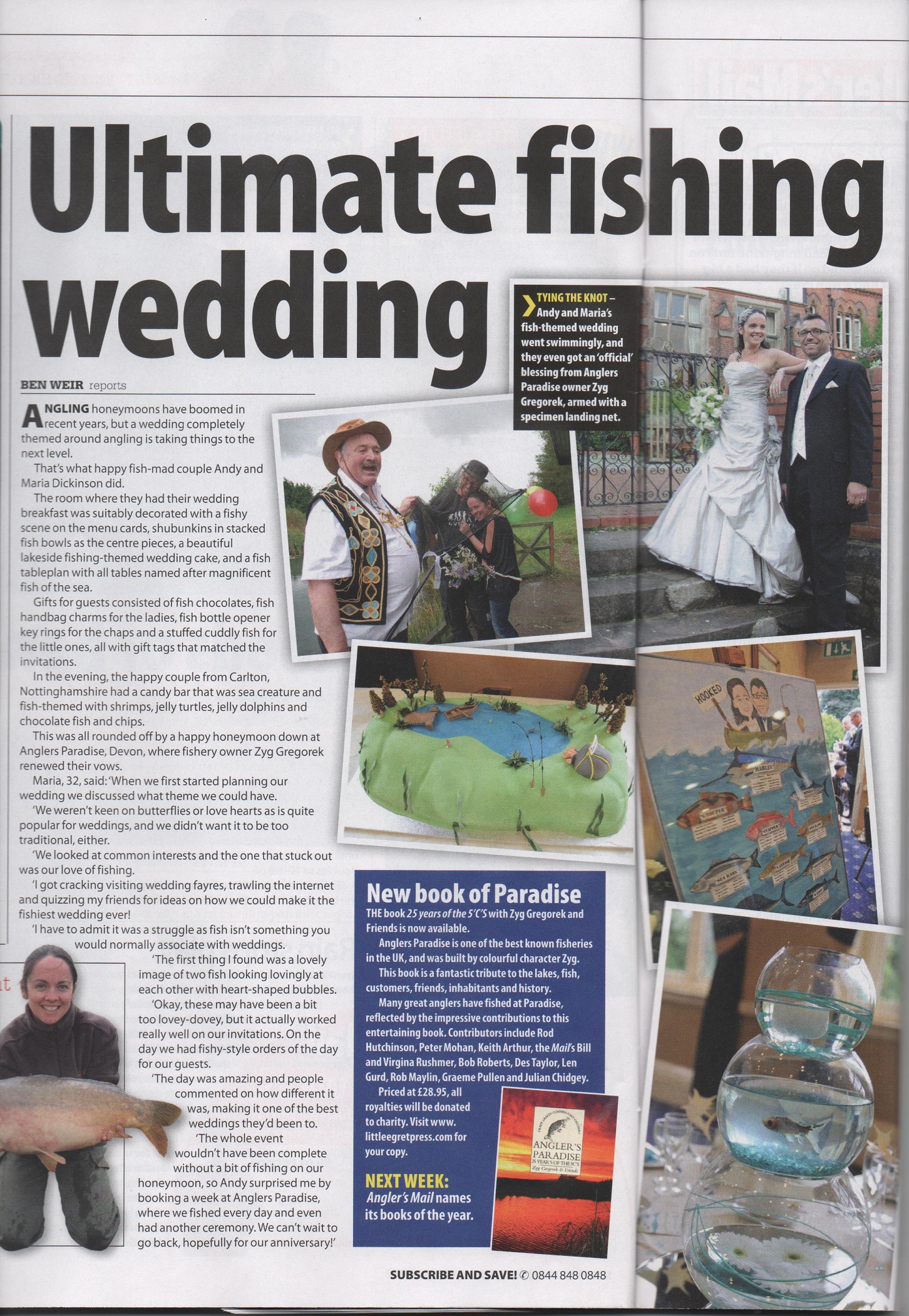 Angler’s Paradise is 150 pages long, 255 x 175mm in dimension. It is lavishly decorated with mono and colour photographs, and is richly illustrated throughout by Tom O’Reilly. The royalties from this book will be donated to a charity chosen by Zyg.

Available in both Cloth Edition (£28.95) and a limited edition (50 copies only) Leather Bound Edition, each signed, numbered and hand-bound by Tom O’Reilly with edge-gilded pages, oasis goatskin leather, spine bands, marker ribbon and headbands and finished with gold-tooling detail, presented in a marble paper covered slipcase (£185.00).

Copies can be purchesed from Anglers Paradise (01409 221559) or direct from the publisher.