THE Diamond Jubilee of the capture of Clarissa, Dick Walker’s record-breaking 44lb carp, is being celebrated with the launch of a new Dick Walker book, The Carp Godfather edited by Peter Maskell.

The 195-page hardback book contains articles on all aspects of carp fishing, including tackle, tactics and baits, written by Dick, who held the carp record for nearly 28 years, during the 1950s, Sixties and Seventies. There’s also a fascinating insight into the pioneering days of carp fishing, with the formation of the Carpcatchers’ Club after the end of World War II.

You can enjoy the exploits, successes and failures of his angling pals, Peter Thomas, Maurice Ingham, Pat Russell and Fred J. Taylor as they tackle waters like Mapperley Reservoir, Woldale, Hunstrete, Dagenham and Redmire, illustrated by very rare photographs of their catches.

Meanwhile Peter Maskell has granted permission for me to publish this exclusive extract. It’s Dick Walker’s own account of how he changed carp fishing forever… 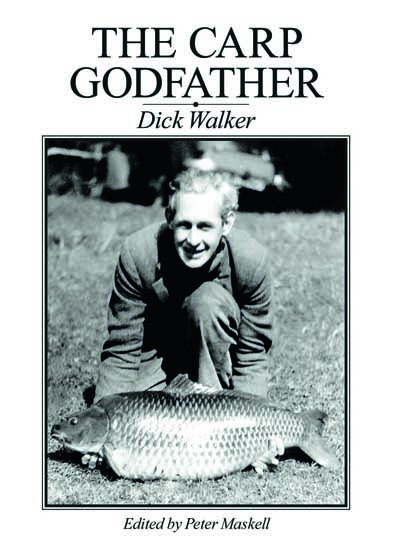 The Night I Caught Clarissa

On September 12, 1952, Pete Thomas and I set out for Redmire in a downpour. But by the time we arrived the sky had cleared, it was very cold and the stars were shining brightly. We fished until about 2am then, seeing dark clouds coming up, we pitched a tent to keep off the impending rain.

We chose a spot on the west side of the lake, in deference to a theory I have that when carp have been driven into deep water at night by falling temperatures, they usually move out of it again in the early morning on the side which first catches the morning sunshine.

Looking across the lake, about 100 yards wide at this point, we could see a line of trees, which appeared as black shadows. To the left, ten yards along the bank, was a clump of weeping willows, whose branches trailed in the water, and beyond them was a big bed of exceedingly tough pond-weed. This extended about 20 yards out into the lake, as did another bed of the same stuff on the right of our position.

Beyond that, forty yards away, was the dam at the end of the lake, which runs at right angles to the bank from which we were fishing. Halfway along the dam were some alder bushes, with a tangled mass of writhing roots trailing in the water.

Immediately to out right, on the bank from which we were fishing, was a mass of brambles hanging in the water and extending to the bottom, concealing an undercut bank, hollowed-out to a depth of between three and four feet, a favourite haunt of moorhens and rats.

We were both using Mk. IV rods and Mitchell reels; my line was 12 lb. plaited nylon, to which a No. 2 Model Perfect taper-shank hook was whipped direct. Our baits consisted of a bit of crust on the bend of the hook, with enough breadpaste moulded round the shank just to make the lot sink very slowly. We cast out to the edge of the deep water, a few yards beyond the pond-weed; Pete’s to the left and mine only a few yards to the right of where his bait had landed. Electric buzzers were clipped to the lines between butt-rings and reels, and all was ready for the carp to bite; to attract them, mashed bread groundbait was thrown out.

By this time the sky had clouded over completely and there was a decided increase in temperature. But the darkness was intense and I cannot remember ever being out on a blacker night. All I could see were the silhouettes of the trees opposite.

Just before 5am one of the buzzers sounded and we were both at the rods at once. “It’s yours,” said Pete. I put my hand under the rod, palm down, and raised it until I could feel whether the line was running out. It was.

So I dropped in the reel pick-up, checked to make sure that the line had been picked up correctly, and then struck hard. I came up against a very solid resistance and Pete, realising that I had a fish on, reeled up his tackle out of the way.

I crouched so that I could see the curve of the rod against the sky – and waited on events. I did not want a fresh, lively fish brought too soon into the fifteen-yard wide channel between the weed-beds, and I determined that, if possible, the battle should be fought in the deep water beyond.

The fish went slowly and powerfully to the right towards the dam, well out beyond the weeds; and then came the part that was most impressive – sudden terrific tugs on the line that whacked the rod-point down with irresistible force.

This was something I’ve never encountered before or since. The speed and power of these tremendous tugs was such that the reel clutch couldn’t give line in time and they had to be taken on the rod.

In all I suppose there were about twenty of these pulls; then the fish started moving quicker, and got dangerously near those tough roots that protrude from the dam wall. Four pounds or forty, it must not get among them or all would be lost, so I increased pressure. With the line singing with its tautness, the fish slowed, stopped, turned and then forged into the weedbed on my right. Everything went solid. Peter said: “Take it easy. Wait and see if he’ll move.” Nothing happened and I told Pete I was going to try handlining. “All right,” said Peter, “But take it easy, that’s a big fish, you don’t want to lose it.”

I pulled off a couple of yards of line, so as to be able to get the rod up quickly if the fish bolted suddenly; then I pointed the rod straight at the fish and began tugging. Suddenly, there was a frantic pull, up went the rod and out went the fish into the deep water again.

I let him go well out, and then tightened up firmly again, praying for him to move left; and he did. When he was opposite, I ‘went to work’ and although there was a lot of boring and plugging, give and take, it was possible to keep the fish out of the weed and eventually to get it under the rod, where it rolled at the surface. 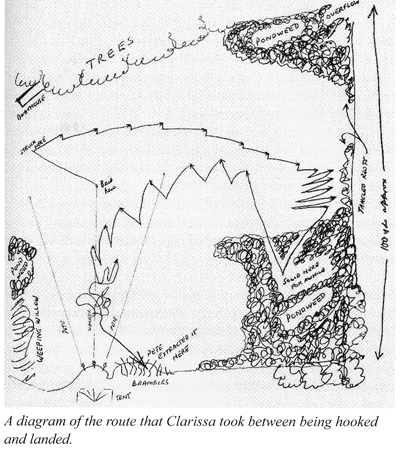 Pete was ready with the net, and as I drew the fish towards it, he switched on the electric lamp. We saw a great expanse of golden flank as the fish rolled. “Common carp,” said Pete.

At that point, the fish rolled again and with a last effort, shot towards me and to the right, crashing into the submerged bramble bush. Nothing I could do could shift the fish, which eventually settled down into an immovable sulk.

I couldn’t shift it. But Pete did; he lay on his face in the bramble bush, reached underneath, got his hand on the carp’s nose and turned it round; whereupon it shot out the way it had come in – into the net which Pete had put in the way.

He had quite a struggle to lift it out, but finally managed it. The hook was only lightly lodged in the roof of its mouth and might have come adrift at any time. Then we put the fish in a sack and lifted it on to my spring balance, which goes up to 32lb.

The pointer came up against the stop with such a thump that we both knew at once that here was a new record, but we could tell no more. So we tied up the mouth of the sack and lowered it into the water.

We rebaited and cast out again. Peter went into the tent; but I knew I could never sleep, and sat smoking and thinking till dawn. It was then that I resolved that, record or no record, that fish should not be killed. Many times I’d wondered what I should do if I ever caught a record carp; now I had to decide, and kill it I could not. 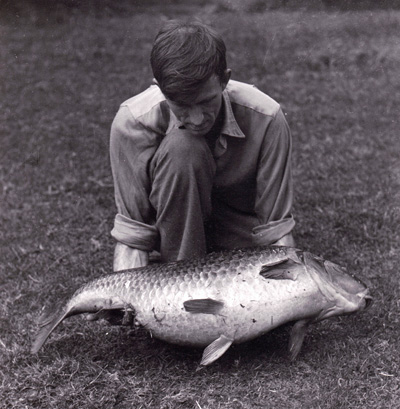 Later in the morning I telephoned the London Zoo, and in the afternoon their van came with a tub to collect the fish, which was accurately weighed on arrival at 44lb.

The news caused quite a stir in angling circles, most people being astounded to realise that carp of such size existed in Britain. It was no surprise to my friends and me, who had known that such fish were in more than one water for a long time. In fact, it is pretty certain that some carp reach as much as 60 lb, but they will be hard to catch.

* Although Dick and Pete initially called the fish ‘Ravioli’, it was later christened Clarissa, and lived happily at the zoo until her death in 1971.

Fancy Owning Your Own Copy?

The Carp Godfather, with a Foreword by Chris Yates, is limited to just 470 numbered and signed copies and is priced at £27.95 + £2.75 First Class p&p. To order your books, just send a cheque for £30.70, made payable to Peter Maskell Publishing Services, direct to Peter at Churchview House, Main Street, Wilsthorpe, STAMFORD, PE9 4PE, tel: 01778 560 824 (evenings preferred), or you can email: petermaskell@btinternet.com

Footnote: There is also a special limited edition of 44, signed and numbered leather-bound books, complete with slipcases priced at £170 + £8 for Special Next Day Delivery.

3 thoughts on “Book Extract – The Carp Godfather by Dick Walker”