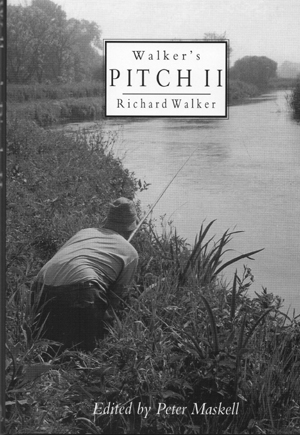 If you only read one angling book this year, make sure it is this one. In fact if you only own one book in your life you could do a lot worse. No other angler in my lifetime has enjoyed the influence over generations the way Walker has and it is refreshing to find a ‘new’ book published by the author 23 years after his death.

The original Walker’s Pitch was published in 1959. It was an anthology of the best columns he had written in the Angling Times and was republished as recently as 2003 but that simply left everyone wanting more.

Now, thanks to Peter Maskell, we have Walker’s Pitch II, a compilation of Walkers finest articles during a period when he was arguably at the peak of his prowess from 1962 to 1966.

Maskell joined Angling Times in 1972. He worked there for seven years and got to know Walker well. Before his untimely death, Walker asked if Maskell would continue to produce books for publication. This is the fourth so far and unless you were an angler in the swinging sixties it will be a completely new work to you, but the ideas won’t be for this is where so much of our modern thinking was born.

There is little wonder that Rotherham’s esteemed gentleman of angling, Ron Clay speaks of Walker with such reverence for this book clearly demonstrates why Clay places him on such a high pedestal.

In an era when split cane was the height of fashion Walker wrote of camouflaging tackle. Today we anglers dress from head to toe in Realtree patterned clothes and take steps to camouflage everything that goes near the business end of our tackle.

He predicted that zander would spread to many rivers outside the Ouse catchment yet who would have believed, even ten years ago, that zander would become common captures throughout the River Trent and its tributaries.

In a section devoted to catching barbel he talks of targeting big fish in slack water in winter. Only this week I read an article by a pioneering angler claiming to have taken multiple catches of barbel from normally unfancied Trent ‘bream’ swims in the past couple of seasons.

Walker was an engineer and highly intelligent to boot. But he was also pragmatic. Specimen anglers should go match fishing for a year, he said, to improve their skills. “Remember, you’re fishing to please yourself, not other people.” Was another of his sayings. But he could be rather controversial and to this day we cannot be sure whether some of the things he wrote were done to stimulate debate or simply for the sake of controversy.

Having invented the first aerodynamic leger weight (the Arlesey bomb), the first beta-light float, the first electronic bite indicator, designed countless rods including the legendary Mark IV Avon, he was at the forefront of tackle development yet he would frequently come out with statements like, “I don’t want foolproof gear. Foolproof things encourage fools.”

He even went so far as to suggest that there was no need for pike in a fishery and that far from being beneficial, specimen fish waters would be better off without them!

But whenever he got political there were no punches pulled. Has a right old go at the RSPCA when they successfully campaigned to ban angling on a public water because swans became tangled up with fishing lines. Walker was most upset that banning angling was such a simple action when the RSPCA could quite easily have taken the radical step of having the swans moved elsewhere instead.

But what really got his blood boiling was when the RSPCA passed a resolution deploring the killing of any form of wildlife for sport.

“It looks like the anti-blood sport cranks have finally taken over.” Wrote Walker. “Be that as it may, the RSPCA can now be regarded as anti-angling and it remains to be seen whether the Society will wish to retain Royal patronage, since members of the Royal family continue to participate in field sports, including shooting and fishing.”

He didn’t mince his words with Clubs and Associations, either, and one of my favourite pieces could easily have been written yesterday about a certain stretch of the River Trent owned by Barnsley And District. It was called ‘Hooliganism Doesn’t End Because Of Night Ban!’

“It does seem a pity, doesn’t it, that in Yorkshire, the world’s greatest stronghold of commonsense, one association has banned night fishing and another is expected to do so.”

Describing the chief problems of fires and litter as hooliganism, Walker states quite logically that he’s “Never known hooliganism to be prevented by keeping everyone off the banks except hooligans because hooligans don’t care whether night fishing is banned or not.

“Of course, this sort of behaviour produces plenty of complaints, but no-one ever seems to understand the basic reason, which is simply that night fishing is barred in the particular waters. If these anglers could settle down to fishing, advised by older and more responsible anglers fishing the same water, hooliganism and irresponsible behaviour would be practically unknown.

“The whole trouble, you see, is that few people realise that banning night fishing is one thing, preventing it is another. All it means is that only irresponsible people will be there then, with no responsible people to keep check on them.”

Hmmm, does that ring a bell with anyone?

Walker died in 1985 but the majority of this collection of articles would be as fresh and challenging were they written today, so much so it’s hard to believe that they were first penned more than 40 years ago.

Walker’s Pitch II is available as an open edition with the first 500 copies being signed by the publisher from the Little Egret Press, price £23.95. A further 30 copies will be bound in full leather at £165.00.