Although the past month or so has been pretty hectic, as it always is at this time of year with so many fishing oportunities to take advantage of, I’ve been trying to keep on top of my fishing reading as best I can.

Carp Along The Way – Volume Two 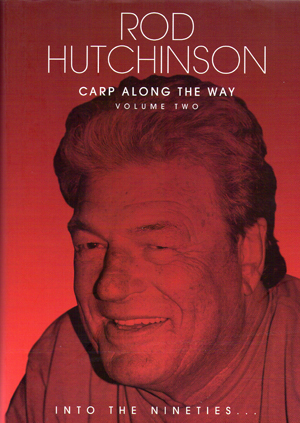 Carrying on where Volume One left off, we follow Rod into the early nineties and it’s a real joy to share his irreverent humour. This, his sixth book is without doubt his best work since ‘The Carp Strikes Back’ and I heartily recommend it to every carper, inexperienced or otherwise because it allows us to understand how easy it is to become obsessed by carp.

Insights range from one extreme, where we learn how he was driven to chase carp all over the UK and beyond, to the other where he develops his own exquisite carp fishery in Lincolnshire, the fabulous Woldview.

Many carp anglers and most of the angling publications out there obsess on the latest rigs and bait concoctions. The latest rods, reels and shelters are as much fashion accessories as Prada shoes but here’s a bloke you would back to catch carp with an old cane and a bent pin. He practically thinks like a fish.

For instance, at any given time on any given day he will probably be watching the weather, relating high tides to high pressure, warm fronts to impending rain or whatever the prevailing conditions happen to be and predicting in his mind how carp on given waters will be behaving. Even when he’s not fishing.

Successful carping is not about having the latest gizmos and gadgets, it’s having the uncanny knack of being in the right place at the right time more often than anyone else on the water. Rod has that knack in spades.

I loved the characters he shares with us in the book and in particular ‘Big’ Dave Walker from Sheffield. I know Dave, have fished with him on occasion and he is the bailiff at Alderfen Fisheries near Wroot, but now I know him a whole lot better! Can’t wait to see him again, now.

I can fairly say that I enjoyed every single page of this book and will be eagerly awaiting the next instalment.

Carp Along The Way is published by Angling Publications Ltd with a forward by Tim Paisley and costs £24.99p. Copies can be ordered from the web site www.anglingpublications.co.uk Or you can give them a call on 0114 2580812

Just For The Record – The Quest For Two-Tone 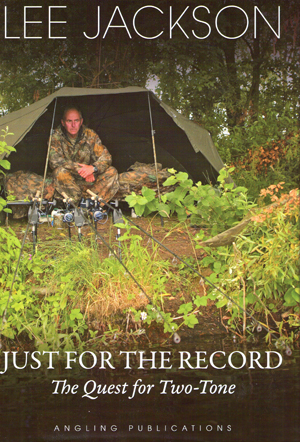 If you meet former dustman Lee Jackson he doesn’t strike you as a likely author but he’s come up with a cracking debut with his first ‘proper’ carp fishing book, Just For The Record. In the book Lee reveals how he became obsessed with one venue and one fish in particular, Two-Tone.

Lee spent seven years fishing at Conningbrook Lake in his quest to catch Two-Tone, a fish he eventually did manage to catch at a new British rod-caught record weight. The book charts his journey from the discovery of Conningbrook through his developing obsession with this one individual carp.

‘The Brook’ is without doubt a very special water, rich and clear, that doesn’t give up its treasures easily. Big fish, low stocking levels, high concentrations of natural food and lots of angler pressure all add up to a difficult challenge.

Lee’s obsession is dogged with frustration on each step of his journey but he tries everything in his armoury to fool the biggest carp in the land. The record books will tell you that he ultimately succeeded but along the way we get Lee’s personal perspective and share in some of the great friendships that were forged with others who held identical dreams and shared a common bond.

There are some 28 chapters within this 312 page hardback and many previously unpublished pictures of the Brook’s residents, not to mention those who fished for them. Besides Lee’s own personal story there are a number of guest chapters from the likes of Paul Forward, Lee Watson, Rod Killick, Ian Brown, Pete Regan and Simon Bater telling their own stories about this incredible venue.

If I’m being perfectly honest, I loved the first two-thirds of the book in which Lee charts his own campaign from initially discovering the water through to breaking the record. It would have been enough. I’m not sure that I needed to read several more accounts of how other individuals tried and (in most cases) caught the same fish. But then again you have to remember the common cause, the quest for Two-Tone, which bonded these guys together.

Just For The Record is published by Angling Publications Ltd with a forward by Tim Paisley and costs £29.99p. Copies can be ordered from the web site http://www.anglingpublications.co.uk/ Or you can give them a call on 0114 2580812

Carp For Life by Len Arbery 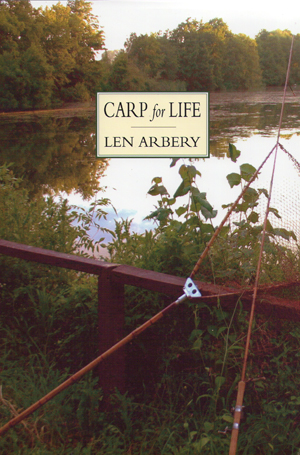 Now in his seventies, Len Arbury proves that age is no barrier to writing. This, his sixth book, is about carp. Not just the species but the people, the places and the experiences garnered over six decades of fishing for them. Len is fortunate to have fished with some of the great names of carp fishing, particularly the late Fred J Taylor MBE, but I’m racing ahead.

The book opens with a look at the history of carp fishing and then devotes a whole chapter to the man credited with inspiring modern specialist angling, Richard Walker.

Numerous waters are featured but there can be no hiding his love for a small, less than 3 acres, water called Bernithan Pool, or as it is known to anglers far and wide, Redmire Pool. It was made famous by the capture there of a record carp, by Walker, in 1952. That record stood until 1980 when Chris Yates caught the UK’s first carp weighing more than 50lb from the very same place. Several chapters are devoted to his times there.

This is not a book that will teach you how to tie the latest rig, nor does it seek to promote the wares of certain tackle manufacturers. It’s about the spirit of fishing, it’s about friendships, camaraderie and about how we enjoy our times by the water with friends. He even writes honestly and openly about some of the fish he has hooked and lost, a far cry from the outpourings of those who fill books with nothing more than trophy fish and how clever they were to catch them.

What’s more, there’s more than a touch of down to earth realism contained within the 160 pages because Len doesn’t live on the bank as some of the sports rising stars appear to do. He’s normal, like the rest of us.

The book includes a 28 page colour section that features a number of people who I have been fortunate to share times with on and off the bank and many more who we would all, I think, like to have. 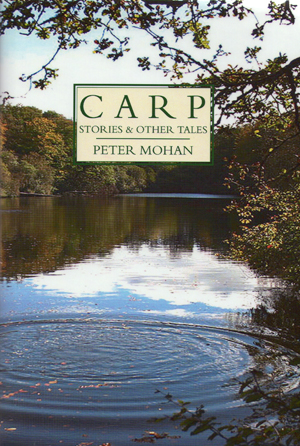 This is an odd little book but I’m sure it will appeal to those who are familiar with and lovers of Mohan’s previous works, like Cypry The Carp.

You see, Peter Mohan likes to write stories and although the book weaves fiction and fact it’s left up to the reader to decipher which is fantasy.

I found myself feeling a little disappointed at first, but as his characters grew on me, so my enjoyment increased and I found myself rather warming to his descriptions of encounters with Russell Oates and Gillian, not to mention his conversations with A. Vole.

I rather felt a pang of empathy in a chapter he shares with Len Gurd called Carp Fishing Fashions Through The Ages when I read the line:

‘At around this time the personality cults started to grow, and the most successful carp anglers were literally followed around the country by those who could not find their own waters – and their big carp swims were invaded as soon as they stopped.’

Yep, that certainly struck a chord!

Whether the penultimate chapter was actually necessary, it’s an interview with the author conducted by Kevin Maddocks in 1990 that was slightly updated in 2006. If he felt it was necessary then surely a new interview entirely would have made more sense.

And then there’s the final chapter, a collection of true tales gleaned from 60 years of fishing. Short, to the point and fun, which might be a perfect decription of Peter himself! In all there’s 217 pages, black and white illustrations by Tom O’Reilly and Len Gurd but no photographs. Perhaps the lack of an image of the author on the dust jacket is a glaring omission on reflection. 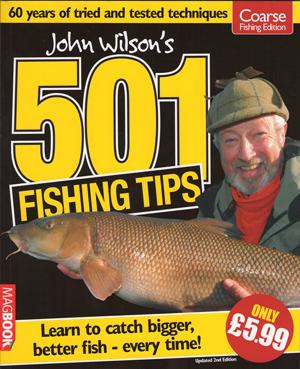 John Wilson MBE is regarded by many as the UK’s leading angler and his latest publishing venture will appeal to almost every freshwater angler. 501 Fishing Tips is a magbook, something that sits somewhere between a book and a magazine, which is crammed full of thoughtful ideas and hints to improve your fishing.

If you’re not familiar with the term magbook or bookazine just imagine a magazine-sized soft back book that, unlike standard books, is meant to be sold on the magazine racks of WH Smiths, Tesco, Sainsbury and online at Amazon.

Priced at just under £6 it is certain to be a massive seller and it genuinely deserves to be so. The 132 beautifully laid out colour pages are crammed with tips and fantastic images.

Split into chapters on species, boat fishing, tackle and baits you can simply dip in anywhere and spend as much or as little time as takes your fancy. It’s not the kind of book you sit down and read all in one go, it’s a dipping book that will appeal to old and young, experienced and inexperienced anglers alike.