When I hear anglers making out they know how to catch big bream it brings a smile to my face. Big bream are frustratingly unpredictable. 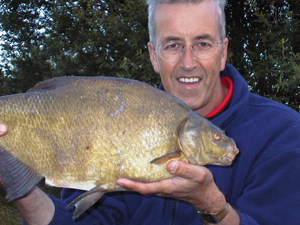 For weeks I had been picking up reports from the Great North Fishery (formerly A1 Pits) suggesting that the bream were feeding really well. So well in fact that the regular carp crew couldn’t stop catching them.
Shoal fish here range from around five pounds to about eight pounds. Good fish by Northern standards, but Pit 6 has the potential to throw up a huge lump, certainly double figure fish turn up each season but it can be a numbers game. The more you catch, the greater your chances of landing a big one. So, all I had to do was turn up when I was ready and slaughter them.

Ha! Some chance! It had been a while since I fished seriously for bream and, to tell the truth, I’d forgotten how contrary they are. One day they can be ridiculously easy to catch, the next they are impossible and from the day my campaign began the place switched off completely.

Carp anglers went from landing twenty bream in a night to just getting an odd fish. Proper bream anglers were really struggling and I couldn’t find my magic wand.

Quite honestly, my Friday night sessions resulted in as many blanks as successes. Confusingly, I started catching an odd fish in the middle of blazing hot days, but even that was topsy-turvey. Fishing method feeders with corn on one rod and 10mm Rosehip Isotonic boilies on the other, I caught carp on corn and bream on the boilies.

Because the lake has a good head of carp to mid thirties, I had begun my campaign using quite heavy tackle. This involved carp rods and 14lb BS Infinity Duo line, which has a low diameter – partly to take the strain of casting heavy method feeders but as much to ensure I landed any carp I encountered.

I also attacked the place, spodding out loads of particles (Pidgeon Seed Conditioning Mix, pellets, sweetcorn and 10mm boilies) and balling-in anything up to 50 balls of groundbait. Of course, the penny eventually dropped; I was going at it like a bull at a gate and the fish simply didn’t want it. Had I been a long stay angler I’m sure it would have paid off eventually. It would certainly have worked earlier in the season but the wise angler responds to the prevailing conditions and this was not the most sensible time for all-out attack.
It was time for a re-think. 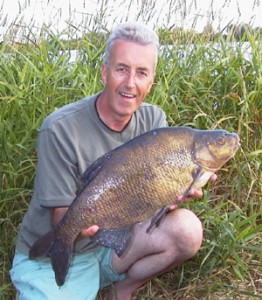 For my next trip I had a word with the fishery owner, Glyn ** who just happens to be a worm breeder. An hour later I had a kilo of worms delivered to my swim. Despite it being the hottest day of the year and there not being a cloud in the sky, a switch to chopped worm in the feeder and worm tipped with corn on the hook, saw me bank 5 good bream when I had no right to expect anything except sunburn and maybe a few mosquito bites.

It was all the prompting I needed. A plan was emerging and it was time for a huge scale-down in my approach to match sized method feeders, light baiting and ‘proper’ bream tackle. Specialist angling is not all about thick lines, big hooks and time on the bank. Sometimes you actually have to fish for them!

The two-and-three-quarter pound test rods were replaced by one-and-a-half pounders; the big Richworth in-line feeders with smaller Middy ones and hook lengths scaled down to 6lb Super Shinobi. The size 14 hooks now looked tiny by comparison to the eights I had been using.

Baiting was cut back to lightly spodded particles on one rod and a dozen balls of groundbait on the other. Because fish were responding in daylight, swim choice became easier. Arriving after work for a Friday night session meant competing with carp anglers to get on the end of the wind, but now I could turn up on Sunday morning as they were leaving and enjoy a choice of swims.

It worked like a dream. My scaled-back approach produced fish in the least likely conditions; baking hot, flat calm, it didn’t matter. Sooner or later a fish or two would turn up. I didn’t quite make the double but never mind, it’s a nice excuse to come back another time when conditions change.

Of course, by then the bream will have changed the rules and the thinking cap will have to go on again. But isn’t that the fascination of bream fishing?

Five Tips
1. Find the fish – sit with the wind in your face and watch for signs of rolling.
2. If you experience line bites, try fishing at closer range.
3. Don’t be blinkered. Bream may feed at any time in any conditions.
4. Keep trying different hookbait combinations till you find one that works.
5. Keep your feed pattern accurate but not too tight. About five metres square is a good starting point. Bream like to graze and a shoal will not fit on a dustbin lid!