The term ‘gassed-up’ basically means that the pike is full of excess gas when landed. This is something which I’ve found to be a very rare occurrence but the consequences can be fatal for the fish. There are three main signs that a pike may be gassed-up. The two most obvious signs may be visible during playing and landing, the pike may be emitting bubbles or it’s body may be obviously inflated. The third sign can sometimes be less obvious until it comes to releasing the fish, that is, that it cannot maintain it‘s balance in the water. A pike may show signs of distress by wallowing on the surface or go belly-up and unable to recover it’s upright position in the water. It may also be unable to dive and so pops straight back up to the surface and onto it’s side. If in doubt, the pike should always be treated as if it may be gassed-up. 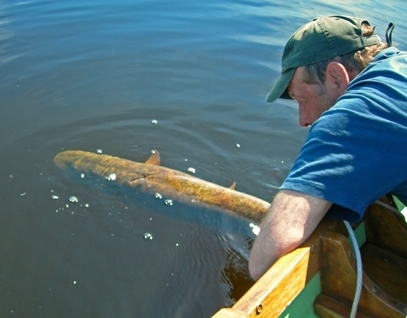 So what causes this excess gas? The simple answer is, we are not 100% sure but leading experts such as Neville Fickling and Dr Bruno Broughton have studied this subject closely and their findings are probably not far off the mark. Their full conclusions can be found on the PAC web site. The basics are as follows; Fish being brought up from deep water have been seen to be blowing bubbles, which suggests that the pike is capable of expelling excess gasses from the swim bladder. Sometimes, they don’t seem to be able to do this, causing the gasses to build up inside them. These gasses are thought to be related to the build up of lactic acid, produced as the fish is exerting itself during the fight and exhaustion. The problem is made worse by a prolonged fight, keeping the fish out of the water too long, high water temperatures and low oxygen levels.

How do we minimise the risk? Firstly, using the right tackle helps to enable the pike to be landed as quickly as possible, thus reducing the length of fight and release of lactic acid. 15lb mono (30lb braid) and minimum 2.5lb test curve rods, strong knots and quality trace & hooks should be used. Unhook and return the fish to the water as quickly as possible. If taking photos, have the camera set up ready and hold the fish in the landing net (in the water) in-between unhooking and photographing. If the fish is showing any signs of distress, forget the photographs and return the fish immediately. Returning the fish safely is the priority, that way you always have the chance of catching it again another day. Remember, this hardy, tough predator is one of the most fragile of fish when it comes to catching & handling.

What to do if you suspect a pike is gassed up? Don’t release it un-aided, the chances are it will go belly-up in front of you and out of reach and you’ll be unable to help it. Take the fish to a shallow area and hold it, head-up-stream until it feels strong enough to have made a full recovery. In extreme cases it may be necessary to ‘peg-out’ the fish using bank sticks, carefully placed along it’s side to prevent it from going belly-up. The fish is left in this position for as long as it takes to recover. A ‘pike tube’ is the safest way of retaining a pike. These are designed specifically for pike and are more square & rigid in design than ‘carp sacks’. They also allow for a better free-flow of water through the tube to increase oxygen levels for the fish to aid recovery. In any event, the pike should never be left unattended.

I have rarely had a gassed-up pike and so rarely found the need to use a pike tube, favouring the more personal approach of holding the pike for as long as it takes to recover. However, a pike could take anything from a few minutes to a few hours to recover fully so I consider a tube an essential piece of kit for any serious pike angler. Pike should only be retained if absolutely necessary and for the shortest time possible. Never retain a pike for photographing later. When you come to remove it for the camera, it will be fighting fit, more difficult to control and unlikely to cooperate.