I love Ireland! There, I’ve said it. And why not? Well, if you listen to the doom merchants the fishing’s crap, things ain’t what they used to be and it’s had its day. Yeah, right. 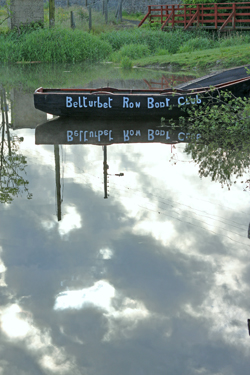 I’ll tell you what the problem is. Folk don’t fish any more. They go bagging up, and hauling. I hear match anglers complaining because they’ve had a crap day – only caught 50lb. Crap venue, they need to stock more fish. And none of that silver fish crap, we want more carp. And then some more. Fishing’s only really good when you count the number of keepnets you’ve filled.

Is it just me or is that total rubbish? Is fishing now reduced to who’s the strongest? Who can haul out more big carp, do it quicker and keep it up for longer? Is fishing supposed to be a work-out? Is there no longer any merit in refined tactics, catching roach, skimmers and perhaps long-range bream fishing? If so, the world’s gone mad. 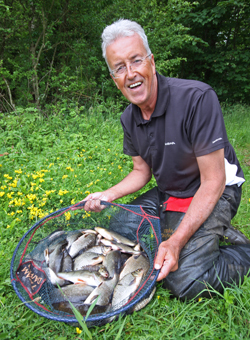 And no-one travels any more. Folk fish their local commercial fisheries all the time doing the same old thing. Writing my weekly newspaper column used to be interesting. These days it’s a drudge. How many times can you type, Fred Bloggs caught 150lb on method feeder and enjoy that. Winner caught all match long on pellet and paste, or 45 carp on pellet waggler. I tell you. Fishing will destroy itself.

Time was when folk travelled the country, fishing a variety of venues and caught different species. To be a top angler you needed to be able to fish a groundbait feeder, a block-end, stick, waggler, pole, whip, bolo, bloodworm, joker, maggot, caster, pinkie, squatt. Your tactics were refined for each venue, the Bristol Avon was a world apart from the Warwickshire Avon, the Severn utterly different to the Trent, the Witham from the Welland or the Nene. As for the Yorkshire rivers, what could be more different to, say, the Huntspill, or Kings Sedgemoor. You needed to master techniques, skills and the art of using small hooks and light lines.

It’s no surprise that the rise of commercials has coincided with the decline in our International domination. 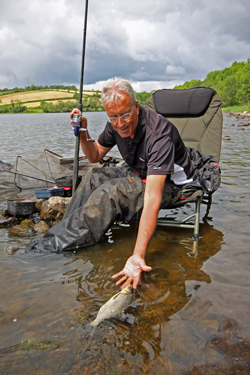 But let us not digress. I want to talk Ireland. Very soon it will be the last bastion of wild, traditional fishing this side of the Continent. It has vast loughs, inumerous lakes, countless ponds and some of the finest river systems around. Huge catches are still taken, but who wants to hear someone caught 40lb of wild roach in the press when its possible to catch 50lb of tame ones from an artificial puddle back home. Seventy pounds of bream makes for a fantastic days fishing but it’s drop in the ocean compared with 200lb of carp.

But do you know something? I’ve travelled the world for my fishing. Africa, Asia, America, Canada, Europe, but do I measure the success of my trips by what I catch or do I consider the whole experience? What do you think?

And that is why Ireland is so special to me. I meet fabulous people in a green and sparsely populated land, where everyone smiles and the roads are practically deserted. It’s clean and fresh and the fishing is free. No syndicates here. In Ireland you find freedom. If I catch fish as well then I’m over the moon.

Funnily enough I mostly seem to catch plenty of fish, too, but occasionally the weather makes things almost impossible. Let me tell you about my latest visit at the end of last Spring…

At least that’s how Mrs Brown would describe it.

You might think we get a bit of rain in England but let me tell you something, Ireland is in a different league. Imagine, I’m sitting on the shore of Lake Garadice, a water that covers 960 acres. Now by any standards that’s a massive expanse of water, probably bigger than all the commercial lakes in Yorkshire put together. And here I am contemplating moving all my tackle back from the edge for a second time because the level has risen another 6 inches in the past 2 hours. That means the lake has swallowed over 130 million gallons of extra water in barely 120 minutes, or to put it another way, more than a million gallons a minute. It’s because a whole month’s worth of rain fell yesterday and another month’s worth fell the day before. I’m not trying to make excuses but is there any wonder the fishing proved to be a little harder than expected? 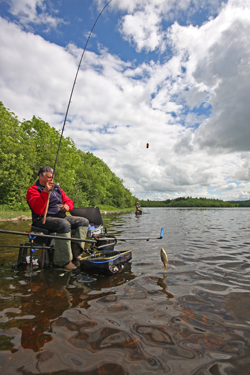 I’m fishing with Francis McGoldrick who is a member of the Irish Feeder Fishing International Team and I’m being treated to the most stunning display of accurate casting I have ever witnessed. He has a 2 litre plastic bottle marker tethered 70 metres out over 26 feet of water, bobbing up and down in the waves and every single cast is landing within a yard of its intended target, but every now and then there’s a hollow thud as his feeder actually hits the bottle. It’s astonishing.

‘If we were fishing for bream,’ Says Francis, ‘Then I’d be spreading the feed around more but you need to keep it tighter for hybrids.’

Even so the fish come in bursts. You catch 4 or 5 quickly then they back off for a while. We both catch from the off but as the lake rises the fish grow finicky. It’s so frustrating. Francis catches more fish than me but I sort out the biggest. ‘Normally you’d get lots around that size.’ He assures me. And boy, do they fight. ‘That’s a handful of power, Bob!’ 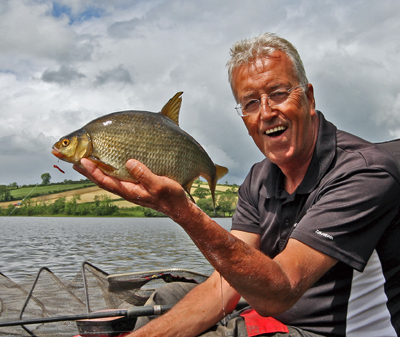 Francis owns the Anglers Rest B&B, pub and restaurant in Ballyconnell where the steaks are simply legendary. Seriously the sirloins are two inches think and Irish Fisheries staff regularly drive upwards of 40 minutes to eat there when they are out and about on field trips. You don’t get much better recommendation than that. 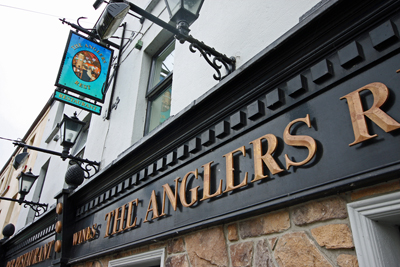 The previous evening I ate in the restaurant and the Irish feeder fishing team was holding a tactics meeting on a nearby table. Tonight the European Championships Float Team is due in. It’s that kind of pub. I meet up with some of the guest who are staying there. They’ve been regulars for 20 years and wouldn’t go anywhere else. Oh, and I nearly forgot, Francis owns the tackle shop next door so they don’t have to go far for tackle and bait. 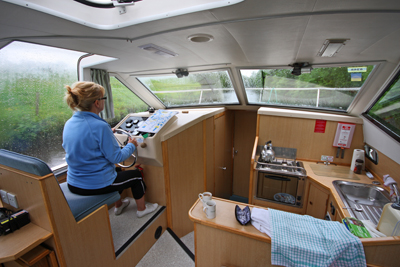 But Sue and I weren’t staying on land this time, we’d hired a fabulous cruiser from Emerald Star which we picked up at Belturbet, then sailed down the River Erne into Upper Lough Erne before turning left up the Woodford River on the Shannon-Erne Waterway to Ballyconnell. They call it a canal but I thought it was one of the most alluring rivers I’ve seen, like a slightly wider Warwickshire Avon. Apparently it holds huge roach but every now and then you’d discover completely un-fished reed lined lakes opening up off to the side just begging for investigation. Apparently they’re stuffed with tench and pike. Next time I’ll hire a small dingy to tow behind the cruiser because that would open up so many more fishing opportunities. 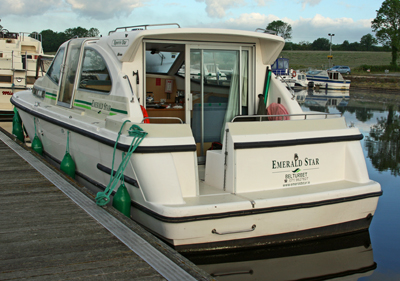 Each night we simply tied up at one of the many free Waterways Ireland moorings of which there are plenty to choose from. Indeed what did surprise me was how little boat traffic there was. It wasn’t unusual to cruise for a couple of hours without seeing another moving boat and you saw even fewer anglers.

On Saturday I had a date with Shane O’Reilly of Inland Fisheries Ireland and Gerry Olin who owns Esox Lodge on the banks of the Erne. 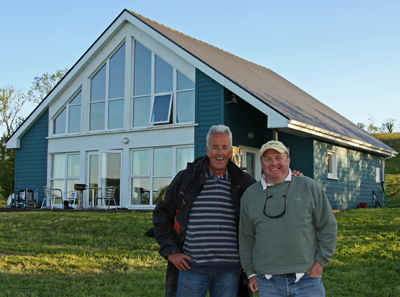 Shane is my number one contact in Ireland with an encyclopaedic knowledge of Irish fisheries and he bends over backwards to help any angler who’s heading over there. He’s good fun to fish with and it was Shane who introduced me to Gerry. Our aim was to catch pike on lures and on fly from a small boat but as soon as we set off it was clear that the river was now carrying a lot of colour and the intertwining lakes were in no better state. But we certainly gave it our best shot. 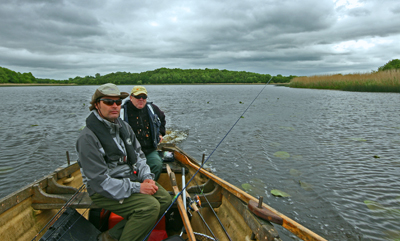 It’s ironic that pike to over 30lbs have been caught from the jetty straight in front of the lodge Gerry rents out to anglers yet we were travelling here, there and everywhere desperately looking for fish. Mind you, I’m sure we’d have done better on the day using smelly deadbaits but that wasn’t the point. We tried the normally prolific bays with no result. We went completely off-piste into the ‘secret’ lakes that lie hidden behind tall bulrushes and even in lakes that ran off the secret lakes. Proper virgin territory and it was a switch to a gold lure that gave me the first fish of the day. We all agreed, size isn’t everything. 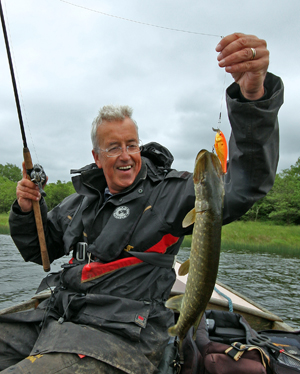 And I learned how to cast a pike fly. But the biggest saving grace was that it had finally stopped raining and as the day wore on the sky finally cleared and we were bathed in perfect sunshine. 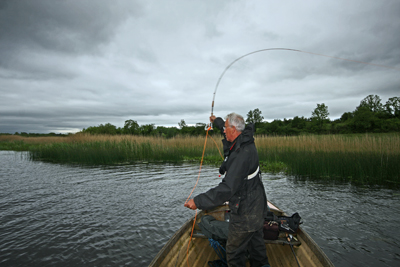 It was tough though, and our tally of 6 jacks was not to be sniffed at because Gerry put in a huge amount of effort to deliver such meagre reward. Two weeks earlier he had a party of guests in from Belgium and they caught over 320 pike in a single week. But that’s fishing, eh? You can’t beat the weather. Certainly I’d love to return in more favourable conditions. 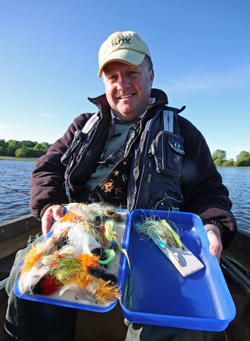 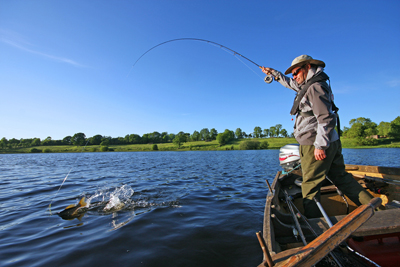 And that was it really. A very short trip in diabolical weather conditions. Frustratingly the rain cleared away as we were leaving, the sun shining down from a clear blue sky as we drove back to Dublin. Mind you each river we crossed was still the colour of chocolate but it wouldn’t be long before they returned to normal levels and the fishing would be spectacular.

If only we could have stayed on a while longer…