In which Bob Roberts continues to share tales from his angling life. Chapter 15 looks at a few of the many sessions he has shared with top angler Matt Hayes…

Days With Hayes – What An Expert Can Do…

Matt Hayes and I were good friends long before he rose to his exalted position in the media. We met one afternoon at what is now the Great Linford Fishery complex. Back then it was called Linear Fisheries and run by Len Gurd, ably assisted by Bob Baldock and Roy Parsons.

I was filming with Len at the time. One of the fishery bailiffs, a young tyre salesman called Matt dropped by to say hello and introduce himself. We took a break and chatted for a while.

“Where are you staying?” He asked.

“Mill Farm, with the Adams’ (as in Adams Mill – later to become famous for its rather large barbel).

“There’s no need for that. Why not come and stay with us? Come round tonight when you’re done fishing for a bite to eat and we’ll take it from there.”

And so began a friendship that has lasted ever since.

Despite living 120 miles apart Matt and I became fairly regular fishing partners. I’d go and stay with his family and we’d fish here and there. On one occasion I’d gone down intending to do a bit of tench fishing but he’d had to go into work so I said not to worry as I would spend a few hours on the Ouse. 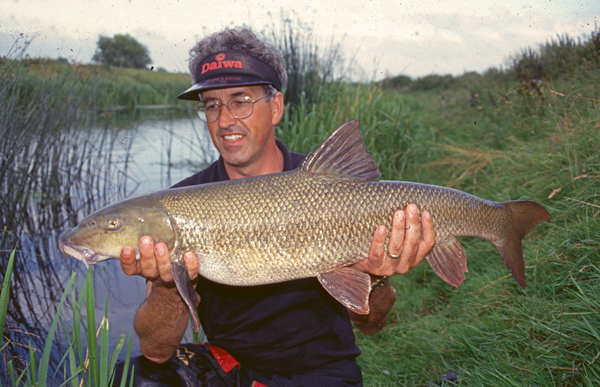 That evening I went back to Matt’s having caught a 12-7 barbel, on the float. What made the fish rather special to me was the fact that one of the regulars, who had spent all summer failing to catch a barbel, had turned round to me as I moved into the swim he was vacating and said, mockingly, “Huh, we’ll see what an ‘expert’ can do now then, eh?”

Matt’s reaction was somewhat different, “Do you know how big that is? That’s the third biggest ever from the river. It certainly beats my best!” And he immediately drove me down to the off-license to buy a celebratory drink.

Slight difference there in the two attitudes, don’t you think?

The following morning we rang the Angling Times and gave them the story. They asked if we could get the pictures through to them by noon so I jumped in the car and dropped them off.

Two days later I appeared on the front cover cradling my barbel and couldn’t help but wonder what would be going through the mind of the guy who had taunted me.

To The Manor Born

When Len Gurd took over his new waters at Stanton Harcourt, now famed as the Linear Oxford Fisheries, Matt had the run of the place and it was also available to me. Unfortunately it’s good 300 mile round trip and it is one of my great regrets that I didn’t take full advantage of the possibilities it presented me with. 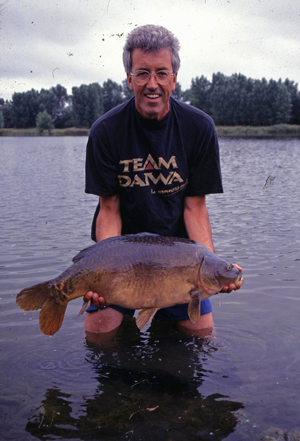 Matt and I spent a few days on Manor at a time when only one other angler was fishing on the complex at the same time and he was with us. Roy Parsons was kicking around and John Everard popped in but that was it. How times change, eh?

We’d gone down there with the intention of catching tench but having fished St Johns the first night and suffered endless liners I was shattered and desperately in need of a good nights sleep.

Things were quiet and I slept the sleep of the dead. I didn’t hear a thing so it came as something of a shock to learn Matt had caught three good tench to over 7lb and the proof was in the sack.

The old tinker had winkled out the tincas on cockles and I couldn’t help wishing he’d told me about that little dodge before I’d set off.

Still I was chuffed for Matt even though the smallest of his tench would have obliterated my PB at the time. Later that morning the Gods smiled on me and I landed a rather nice carp of 24lb which at the time was a venue record.

Some years later I mentioned this fish to Adam Penning and he asked me to send a picture through so he could identify the fish. It was none other than Popeye, a fish that became much coveted as it grew on to weigh more than 40lb.

In March 2003 Matt invited me over for a few days. He’d long since moved on to an idyllic riverside location. Walk out of his door and you have a pub 40 yards to your left, the Severn 40 yards to your right. Tough call, eh?

I arrived late morning and we were in no real rush to fish. The weather had been so cold of late; most lakes were frozen and the river temperature barely above two degrees centigrade. There was a lot to catch up on but eventually we decided to give Arley a go. It’s free fishing and you can park by the river. 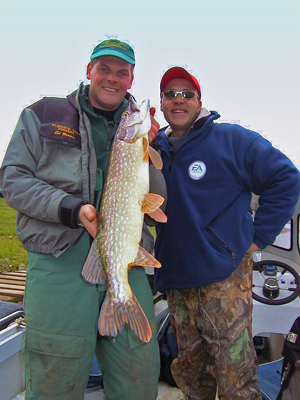 First call was Mal Storey’s for bait and a long old natter. You’d think we weren’t bothered about going fishing. I guess Matt wasn’t because he chose to take photos rather than try to tempt the impossible. Cracking river mind, but I really had to work hard to tempt every bite. I had a few roach, not many, and the biggest shook the tiny hook I had to use to get a bite, but boy I enjoyed myself.

That night we considered our options. Matt fancied taking his boat down to the Warwickshire Avon and trolling lures for pike and zander while I was game for anything. Trolling is a black art to me. It’s a gap in my repertoire, something I’d not done before, so it would be good to try something completely new.

The following morning we drove over to Furnace Mill Fisheries and collected Ed ‘two scoops’ Brown. Ed’s a mad keen piker and a good mate of Matt’s. Ed and I had never met before but hit it off immediately, which is fortunate really. Three’s a sizable crowd in a small boat if you don’t get on.

I learned a lot in a short time on Matt’s boat. I learned Ed is a demon with a pike rod. He sorted out the successful lures in double quick time and it wasn’t long before we both began to catch a few. Matt chose to skipper rather than fish, preferring once more to shoot a few pictures with his camera. What the uninitiated might not realise is just how important his role was in what we caught. There’s more to trolling than cruising up and down a river with a couple of lures trailing behind the boat, trust me! 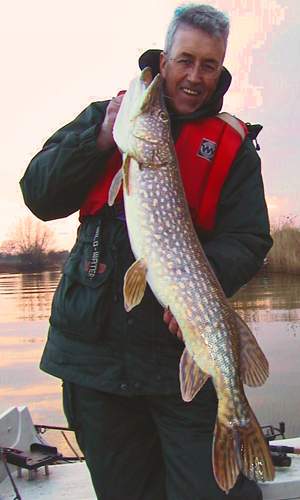 Matt studied the echo sounder like a hawk. Sometimes we hugged the bank, at others we swept back and forth across the flow. Occasionally we slowed down, then we might accelerate. The key to successful trolling involves reading the depth and understanding the contours of the riverbed. The depth here varies dramatically and you can find anything from six to 17 feet.

Towards dusk we moored up and lobbed out a couple of deadbaits. The area has produced double figure zander in the past, but not today.

It hardly mattered. I’d enjoyed a cracking session and my head was now spinning as I considered how this approach might fare on some of the waters back home.

No prizes for guessing where we went the following day. Correct, we went to the Avon. Ed was away netting so Matt’s son Danny came along instead. I still can’t believe how Danny has grown. I’d seen him a couple of times at the NEC but the most recent occasion that I spent any time with him was probably when we’d all been to see Walt Disney On Ice at the Hallam Arena a decade earlier but I’m sure you don’t want to hear about that.

The frosty weather continued and you needed to wrap up well on a boat in those conditions.

Yesterday showed us where the prey fish were shoaled. Find them and the predators will not be far away. We also learned what lures were working so today should be even better than yesterday. 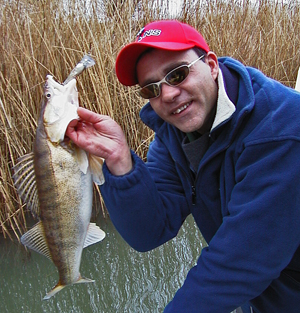 Danny was soon into a pike. I was pleased he had the first fish. From then on we traded fish for fish. Nothing massive but great sport on the short lure rods we were using. Suddenly my rod wrenched over and I’m attached to a solid lump that hangs in the current. Big pike tend to do this but something didn’t feel right. Even so, the last thing I expected to emerge from the depths was a big bream, hooked in the dorsal fin.

After unhooking it I leaned over the side of the boat and supported the bream’s chest on my hand. It sat therewith every fin erect while Matt leaned over to capture that perfect returning shot when, suddenly, pandemonium broke out. A lure rod, complete with lure and Shimano reel slid over the side of the boat and disappeared into 13 feet of water. Wooops!!! Sorry Matt!

It was gone and no amount of effort on our part could recover it.

By the time dusk gathered we’d had something like 22 pike and zander over two days in pretty diabolical temperatures. Great fishing, all things considered.