Settle down, make yourself comfortable and prepare to be filled with disbelief, for the tale I am about to tell will be doubted far and wide but I swear to you, every word is true. I haven’t been taking mind altering drugs or even hitting the whisky bottle, this is simply an account of the most astonishing thing that has happened to me in 50 years of fishing. I always try and tell the truth and, unlike some, I’m not prone to exaggeration and embellishment. But for once there really is, to borrow from Dick Walker’s book title, no need to lie. 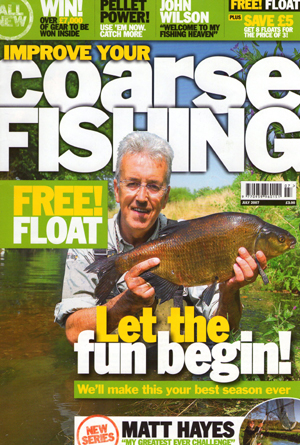 This is the tale I refered to in a recent blog and was first published in my Improve Your Coarse Fishing column, Bob Roberts’ Diary. As an aside, if you don’t read the magazine believing it to be too basic or aimed at numpties, you’re miles out of date. IYCF has grown up. The Korda crew deliver the carpy bits, Matt Hayes and Mick Brown deliver the technicla bits, various expert anglers contribute to the Q&A section, I have a regular diary and then there’s the other feature articles. Throw in tips, tackle reviews, free gifts (including DVDs) and it’s a great package. Like I say, try an issue, it won’t break the bank.

So, back to the story…

I had nipped down to the Trent to meet up with my old mate Allan Parbery, owner of Mistral Baits. Allan and I go back. We’ve fished in France together many times and he was best man at my wedding. “Come and catch a barbel!” I said. So he bought a season ticket and we met on the bank. It was a glorious sunny morning, the river was very low, but that didn’t matter. We had a stove and plenty of coffee should things be a bit slow.

Allan nicked a couple of feeders from the back of my van and he was off. Within an hour he’s had a couple of small barbel and there was a beaming smile on his face. Meanwhile I was ploughing a furrow with my stick float. No chub today, just millions of pesky maggot-nipping dace that were about 3 inches long. But I soon lumped into a barbel which screamed off about 25 yards downstream before the hook pulled. Unperturbed I carried on. 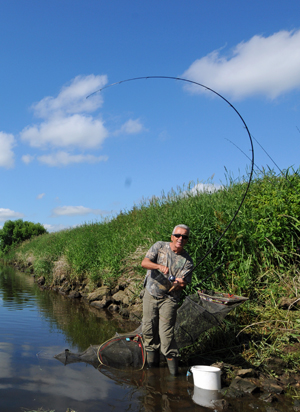 I remember checking my phone at 11.45am and thinking, ‘Ten minutes and we’ll have the kettle on for a spot of lunch…’, just as the float buried and the rod hooped round. At first it ran downstream before stopping and swimming back again, straight past me. It was weird because the fish now seemed ‘lighter’ and I began to wonder if I’d hooked a bream. The Tidal Trent is home to some very big bream, fish that can and do run to double figures. Surely this wasn’t a giant bream?

I couldn’t be sure but the rod tip was ‘nodding’, as bream do. You must have experienced those steady, deliberate pulls where the rod tip jags forward about 6 inches each time the fish turns its head away from you? Well these were 18 inch pulls!

It all felt quite strange.

Gradually I made line on the fish, as you normally do when you have the current working for you as well as the steady pressure you apply with the rod. Slowly it came downstream but more or less holding station in mid-river. I thought back to the time I caught channel cats at Lockport Dam on the Red River in Canada. You’d cast upstream and hook them in the white water. At first it would be stalemate, then you’d gain the upper hand as the fish came towards you on the current before the real battle commence as they swept downstream, straight past you in the fast water. Then you were in trouble.

Suddenly I was in trouble as the fish continued heading downstream, 10 yards, twenty, thirty and it showed no signs of stopping. Time for me to grab the landing net and follow it, whatever it was.

Conceivable a double figure bream turning sideways on to the current could do this, especially on a low river with the tide running out. So I scrambled over the rocks after it as best I could. Seventy yards downstream I managed to get level with the fish and for a while it played fair. I recovered a few feet of line, it took a few yards, but no matter, it was going back and forth across the river rather then up and down it. Surely it would tire soon under this kind of pressure.

Ten minutes passed and I began to revise my thoughts. This couldn’t possibly be a bream, a bream would have given up. A foul-hooked carp maybe? Or, dare I even think it… a monster barbel. A 20lb barbel from the Trent is no longer a pipedream. I will not be in the least surprised if one is landed this season. 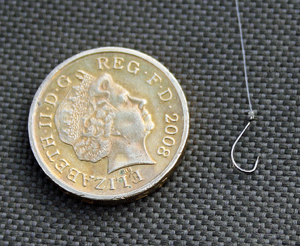 It wasn’t making long runs now and that suggested it might not be a carp. Some of these Trent common carp can scream off and never show any inclination of stopping. This fish was just holding station in mid-river letting me know it was a muscular old beast. My imagination was now running wild, veering between big carp, foul-hooked carp and potential record barbel.

Allan wandered down to join me, “When you disappeared out of sight I thought you’d be back in a few minutes but after a quarter of an hour had passed I thought I’d better see if you needed a hand.”

Allan took the net and I gradually made a bit of ground on the unseen monster. Slowly it came towards me until it was in the very fast water, just beyond the rocks at my feet. So far I’d not once seen my float. The battle had been playing out for a good half hour already and then I spotted the red tip of my stick float just beneath the surface but stare as hard as I might I could not see the fish.

Out of the water popped my float, well, half of it. This battle was nearly done, I thought, but no-one told the fish. Suddenly I was having my knuckles rapped by the reel handle as it powered away, out and downstream. I’d now reach the fence at the fishery’s downstream limit but I managed to scale it intact. If anything the water gets even faster here because the river narrows up a bit.

An hour passed and I’d long since given up thinking it could be a barbel I’d hooked.

“I reckon you’ve been playing that for an hour and a half!” Said Allan. I checked the time on my phone and it was true.

I was now beyond the rocky banks and out on a gravel beach. Most of the flow goes to the far side of the river and it’s nice and steady on the near side, the kind of water where you think you’ll have a good chance of landing anything that swims, even if you have to let it ground on the shallows and dive on it! 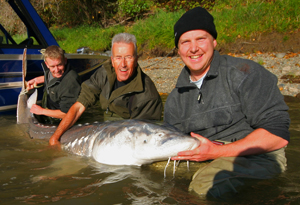 My mind went back to playing a foul-hooked sturgeon on the Fraser River in British Columbia with Stu Walker and Paul Tilly. That fish was 9’ 3” long, estimated to weigh 400lb and we landed it in 90 minutes after a titanic battle. We’d passed that mark already and I’d never, ever fought a fish for this long.

The fish spent most of its time on the far side of the river in the fastest water, simply holding station. Grudgingly it would allow me to draw it half way across the river but each time it came into shallower water it powered off and repositioned itself a little further downstream. I would then have to follow.

Another fence was negotiated safely. We were now more than half a mile downriver and there was no sign of an end to this battle. For how much longer could the line last? When would the hook pull? Doubts began to creep in. Concentration now was paramount. One mistake and not only would two hours of effort would be blown, we’d be none the wiser as to what I’d been battling with. 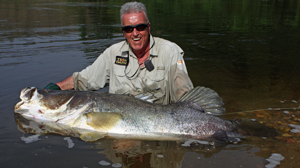 I caught a Nile Perch in February, below Murchison Falls, accurately weighed at 114lb. Despite the scale and ferocity of the Nile, the head thrashing leaps the fish made, it was but a pussy cat compared to this.

Last year I fished for mahseer in the Himalayas and although we occasionally had to follow fish to land them and the fights were explosive, I doubt there’s a mahseer alive that could match the stamina of this fish.

Allan’s mind was in overdrive. “Is there a high salinity content to this water?” He asked, clearly thinking that some monster of the deep had run up the river. 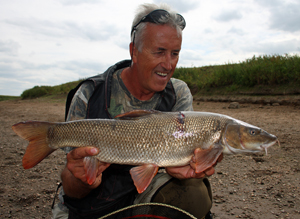 As the three hour mark arrived I was in all sorts of pain. My hands were cramping and my spine was on fire thanks to the constant twisting pressure I was having to endure. Every muscle in my body seemed to be aching but the biggest worry of all was that this fish I was hooked into appeared to be getting stronger!

“I should think so,” He said, “I could have had six barbel now!” 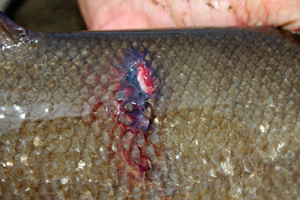 So I piled on the pressure and the fish responded with equal force. What on earth was it? Five minutes, ten minutes of this and suddenly I feel I’m making ground. The fight changes and the fish is suddenly dashing around. I apply maximum side pressure to steer it round into the shallowest water and Allan shouts, “It’s a barbel!”

For a second I have visions of smashing the world record, never mind the British one. Then I see it roll on the surface and my head goes into meltdown. Allan scoops it up in the net and exclaims, “I don’t believe it!” 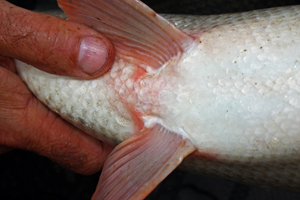 And neither did I because this barbel wasn’t much more than 4lb in weight. How could it possibly have fought like that for fully 3 hours and 20 minutes? What’s more, how could it still appear so fresh? And then, as we rested it in the landing net, I noticed a mark on its back in front of the dorsal fin, and another behind the dorsal fin.

Something… Something had grabbed a 4lb barbel in its jaws and proceeded to play with me for nearly three-and-a-half hours before letting go. I know what I think it was.

The monster of the River Trent! 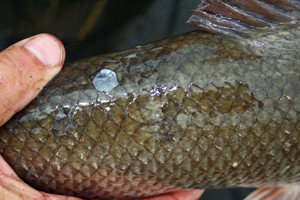 8 thoughts on “The One That Got Away…”