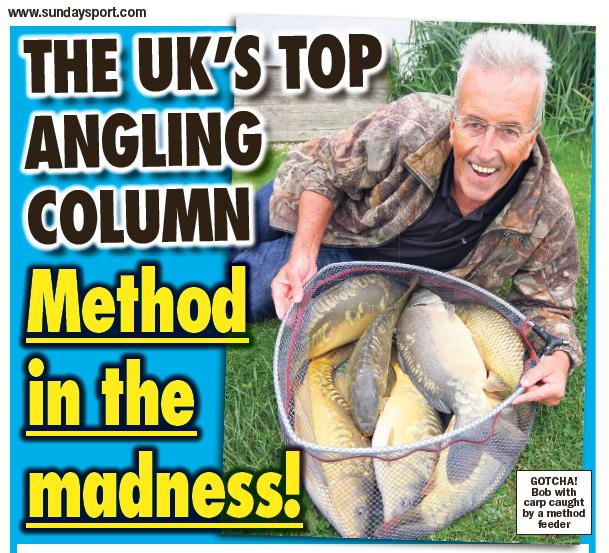 Method In The Madness

I hate to think how many years have flown by since I rocked up at Mallory Park Fisheries one morning to shoot a video with film maker Liam Dale about a revolutionary technique called ‘the method feeder’. The rudimentary and somewhat crude beginnings of this devastating carp catcher were developed at Mallory although I’m sure someone, somewhere will claim it was used in Africa or Mongolia about ten million years ago, such is the way of angling and its insistence that nothing is ever new.

Back then the only suitable feeder available was an Emstat frame feeder that needed to be modified by drilling a hole through the lead-weighted nose through which a length of strong pole elastic was threaded. This ‘bungee’ acted as a shock absorber to prevent the short hook link from being broken when you hooked a big carp.

The Emstat feeder was simply a plastic frame encasing a lead nose cone. They would out-cast almost any other swimfeeder on the market at the time and we would make up two different groundbaits. The first was very sticky and pressed into the feeder to make a solid core. A much softer groundbait was moulded around this and we actually buried the hook bait in this outer layer.

When you cast out this payload of goodies carp would home in on the smell of the groundbait and attack the ball of food. The outer layer would soon dissolve or be whittled away. You knew fish were on the feeder because the quiver tip would be juddering and twitching constantly but you had to learn not to strike at these false ‘bites’.

Eventually the hook bait would be exposed and invariably snatched up by the nearest carp. Because the hook link was so short the carp would hook itself and then bolt off in a blind panic. The bites were sensational and if you didn’t have your wits about you your rod could easily be dragged into the lake.

Mallory was a forerunner of the modern commercial fisheries and the main lake sat inside the racing circuit. There was a certain symmetry about having racing cars screaming around you as the resident shoals of carp did a passable impression of their own when hooked.

Action was invariably fast and furious with huge weights being recorded. This was an era when your average match might have been won with ten or 20 pounds yet Mallory weights were ten times higher. Obviously it was a glimpse into what the future held as commercials rapidly began to spring up across the country.

Roll forward almost 20 years and it’s interesting to see how things have developed. The Emstat feeder is no more yet every tackle accessory company worth its salt has a range of ‘off the peg’ method feeders. Gone are the days when you needed rudimentary DIY skills, everything is now laid on a plate. Open a packet, thread on the feeder, clip on a hook link and away you go. I’m not entirely sure this degree of progress is a good thing. Whatever happened to creativity?

Modern method feeders come in many guises. Most have a ‘flat bed’ which means the lead weight is no longer contained in the nose cone. After all, most commercial fisheries seldom require a cast of more than 30 yards. Instead the weight is moulded into the base where it ensures the feeder lands the same way up each time and because your hook bait is pressed into the opposite side, mostly thanks to the new method moulds which compress exactly the right amount of feed onto the feeder, the hook bait is never masked.

Perhaps the biggest change in the method lies not so much in the equipment as in the feed used. Fancy groundbait mixes have been replaced with pellets, the most successful catcher of match-sized carp ever. Pellets rule, but you should choose the right size if you want the best presentation.

Pellets come in a variety of colours, flavours and sizes but most fisheries insist you use only the ones they sell on site. It’s a huge money generator for them. The vast majority of fishery pellets invariably come from exactly the same manufacturer but they buy in bulk, re-bag and charge you a hefty premium. Fail to use the fishery’s ‘own’ pellets and you run the risk of being ejected. Hmmm. Greed or what? It’s a bit of a hobby horse of mine and most of the match secretaries I’m in regular contact with. What are you supposed to do with the half bag that’s left over?

The perfect sized pellet for method feeder fishing is 2mm. Smaller pellets dissolve too quickly, larger ones don’t compress onto the feeder as well. What you do is pour your pellets into a bait tub and cover them with lake water for a minute or two until they feel spongy. You can add a sprinkle of Horlicks over the pellets if you really want them to stick to the feeder for longer. What you are aiming to do is avoid the pellets breaking away as the feeder hits the surface. That should happen only when the feeder lies on the lake bed. That way you create a feeding hotspot exactly where your hook bait lies.

Casting accuracy is absolutely vital so make sure you use the line clip found on most reel spools. Make a few casts until you land your feeder in the exact spot you want and then clip up. From then on every cast will reach exactly the same distance. All you then have to concentrate on is direction.

Method feeder fishing is simple and devastatingly effective. Try it and you’ll see.

Described as the perfect place to unwind there are 4 lakes perfectly suited to the pleasure and match fisherman. There are disabled, toilet and shower facilities.