Last winter I spent a fair bit of time chasing perch on my local canal network and I have to say it proved to be a particularly tough slog. In previous winters I had been able to pretty much guarantee a fish or two on each trip whereas this time there were more blank days than good days.

Now whether this was down to me resorting to perching only when the conditions weren’t favourable for other species or whether I simply put most of my efforts into the wrong weeks, I don’t know but it got pretty soul destroying at times because sitting on the banks of a bleak canal with little in the way of shelter in the middle of winter can be heartbreaking.

I remember going out for four consecutive days in a row and blanking on each of the first three. It would have been so easy to roll over when the alarm went off on day four but when I get my bloody-minded head on then I’m going to keep going until I break the cycle, even if I’m not enjoying it, and frankly, I wasn’t.

On reflection a lot of work was being carried out to the canal near Kirk Sandall where huge barges loaded with spoil came through each day putting a great deal of colour into the water so who knows, it might just have been this that led to the downturn in catches. Maybe it’s these straws we clutch at that keep us going back for more punishment.

The landscape to the east of where I live is criss-crossed by some of the largest canals in the UK. The South Yorkshire Navigation, Stainforth and Keadby, New Junction plus the Aire and Calder Canals range between twenty and 30 metres wide on average, wider in places and the depth may range down to 12 feet. It’s a huge amount of water and each canal is regularly topped up by river water so heavy rains do have an impact. Not that the canals flood, far from it, but cold, dirty water is flushed through causing the water to colour up whereas in normal winter conditions it will be crystal clear. 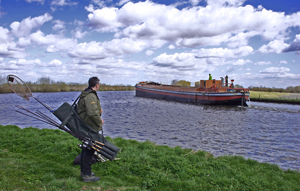 Things are not helped by the fact that our canals link up together and because they cross the flat lands recovered from marshes by Cornelius Vermuyden in the 1600’s there are very few locks. If you take the New Junction Canal as an example, it flows North Easterly in a dead straight line for almost 9 kilometres and there is just one lock at Sykehouse but at each extremity it joins directly with other large canals, unimpeded.

At the south end you have to go almost another 5 kilometres along the South Yorkshire Navigation before reaching Long Sandall lock while at the other you have the massive Aire and Calder which forms a ‘T’ junction and this contributes a further 15 kilometres to the equation without a lock in sight. Consequently we have nigh on 30 kilometres of broad canal to go at with only one lock to restrict fish movement and that in turn equates to more than 150 acres of water. 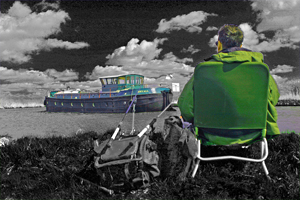 We then take the ‘Stainy’ which is 24 kilometres long and is effectively an offshoot of the South Yorkshire Navigation or the New Junction depending on your definition of where they start and finish. It has just two locks, so if you combine the four canals you end up with the equivalent of five lakes each averaging in excess of 50 acres apiece or to put it in another dimension, you’re searching for a dwindling population of fish in a lake with a shoreline that’s 30 kilometres long. But hang on, the canals don’t end there, they continue and there’s at least another 20 kilometres with genuine big perch potential. It’s a lot of water to tackle and I have to say I’m not exactly looking forward to this winter’s fishing with great enthusiasm, but we’ll see.

Needles In A Giant Haystack

As I said at the outset, the fishing in earlier years had been pretty reliable but not so this time round. Perhaps the big perch cycle has peaked and what we’re catching now will be the last biggies for a while, who knows, but that also means the chance of a four pounder increases, even if these specimens are like needles in haystacks.

When Angling Times asked me if I’d like to cover the Division Three National Championships on the New Junction for them earlier this year I jumped at the chance, knowing it would give me a great opportunity to see where any big perch came from and to speak with anglers who had been practising hard on lots of sections. Surely these match anglers would throw up a few big ‘uns.

So much for my optimism. The anglers who finished first and second each had a perch of about 1.5lb and I never heard of anything bigger. These came from areas I don’t normally target so any clues as to location in and around the areas I’d enjoyed success in the past simply didn’t materialise. 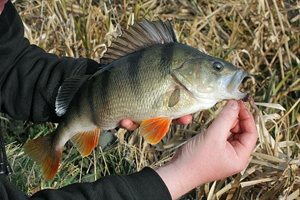 Livebaiting is not allowed on most of the canal network which doesn’t exactly help matters. Deads appear to be ineffective so we’re essentially reduced to fishing with worms. Maggots, casters and redworms will all attract the attentions of roach which can be encouraged to feed on all but the worst days so basically you can target big perch with lobworms or lobworms. If that plan doesn’t work then you can always try a lobworm!

To coin an overused cliché, it’s not rocket science.

Ah, someone will pipe up, what about lures? Well, to date, we have used small plugs, spinners and even flies but they are at their most effective in the late summer months running into autumn. Once the frosts arrive we’ve enjoyed little success with them. If only it was a simple case of grabbing one rod, a net, a small shoulder bag and donning a pair of walking boots. I’d be in absolute seventh heaven.

But we’re left with worms. 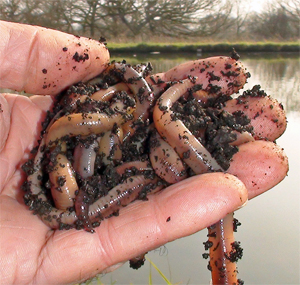 Worms need to be in good nick, the fresher the better and if you have no choice but to store them then make sure they’re fed and watered. Mashed potato is good, a bit of dampened cereal, tea bags, chopped apple, a few old leaves, just keep them moist and fed. Check every couple of days to see that none have died because one dead worm rapidly becomes a whole container full.

In many places the canals stand higher than the surrounding land leaving them exposed to the slightest wind and bitter chills but the north facing banks, especially where they’ve been stoned, are a good source of sphagnum moss. I like to keep the worms I’m using on any particular day in a tub containing dampened moss but always take them out when I get home because it’s pretty sterile stuff. Cleans them up a treat it does.

And did I mention you need plenty of them? Break two or three worms up each cast and loose feed them around your hook bait. 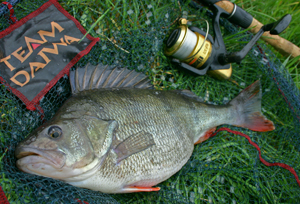 The tactics I’ve used couldn’t be much simpler; two rods on bite alarms with the bank sticks set high enough to afford quite a long drop to a light bobbin. I’ve experimented with all manner of featherweight indicator systems but it seldom seems to matter when they’re having it. Most bites are extremely positive. In fact the bobbin more often than not shoots up to the butt ring at lightning speed as if a perch has spotted the worm, attacked it and bolted off before one of its mate’s gets there first. You have to be on the ball though because as soon as the line pulls tight these perch have an uncanny knack of ejecting the worm.

Last year we did start to get lots of little ‘nibbles’. Stupid little plucks that didn’t materialise into anything and it would be easy to theorise that the perch had ‘wised-up’ but every now and then you’d hit one and it’d be a tiny perch with no more than a bristling attitude. 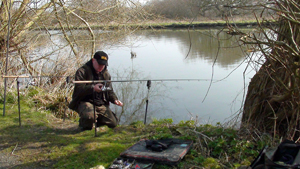 The leger weights I use normally tend to be as light as I can get away with, depending upon boat traffic and tow, and free running. I’ve mostly fished with one rod positioned at the foot of the near shelf and one down the far shelf. Twitching is an option in some areas but you will end up losing a lot of tackle. The ‘Stainy’ in particular has become infested with cabbages while parts of the Junction have a cobbled bed and it’s easy to get a lead trapped between the stones.

Last year I resorted to float fishing with a degree of success. I like to use a float because you can lift the bait and give it a bit of life much more easily, you are ready for any fish that might intercept a lobworm on the drop and you’re much more inclined to keep recasting and search the whole swim.

It’s also an easier way of roaming because you’re not messing around with bank sticks and the like but leapfrogging is not a good idea. 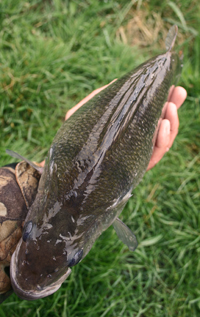 I had it in my head that I could keep on the move constantly with two float rods moving them 5 metres along the canal each cast and crouching in between the two rods. Well, it worked to one extent. I got bites. Unfortunately it was always when I was recasting the other rod, or I’d look away only to glance back and see the float bob up to the surface. I missed so many bites and now have to admit that fishing two float rods is highly inefficient unless you can place your hand on the rod within a split second of seeing the float move and look in two places at the same time!

Just doesn’t seem right fishing with one rod though, does it?

Loose feeding a few red maggots around the hook bait appears to increase the number of bites and whether this is down to small fish activity, the bright colours, noise or sheer coincidence, it’s impossible to say but always worth keeping in the armoury. 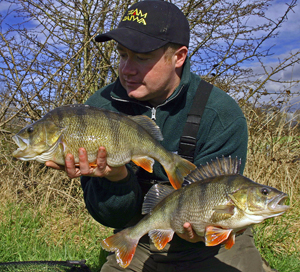 Hooks need to be big, sharp, preferably a size four and they don’t need to be too heavy in the wire. The Kamasan B983 Wide Gape Specialist hooks fit the bill perfectly although I like to squeeze the barb down with forceps just on the off chance of having a deeply hooked fish. Lines really don’t need to be that strong and I’m happy enough to fish with three or 4lb Daiwa Rig Line to the hook. Always check it after a fish though. And frankly, that’s pretty much it except for getting your timing right.

It’s interesting when you talk to friends who have fished the canals because some will say they prefer dawn, I personally believe that late afternoon as the light fades is a key time. Check the weekly papers this winter and there’s a good chance you’ll spot numerous perch pictures taken with fill-in or full flash. 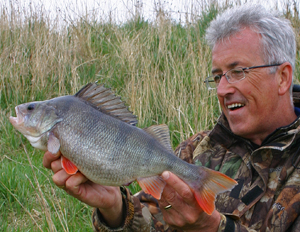 But saying this, so many of the fish that I’ve had have come right in the middle of the day and that leads me to say, don’t go with preconceptions. Even if you have caught at last knockings for the past couple of trips it doesn’t mean they aren’t feeding at dawn – providing you’re in the right swim – and that brings us right back to where we started. First you’ve got to find the buggers!

5 thoughts on “Where Have My Big Perch Gone?”