The views expressed in this article are intentionally tongue in cheek, X-rated and contain adult themes. If you are under-18, of a timid nature or support the current closed season then perhaps it might be best if you click the back button immediately. Otherwise read on at your peril. 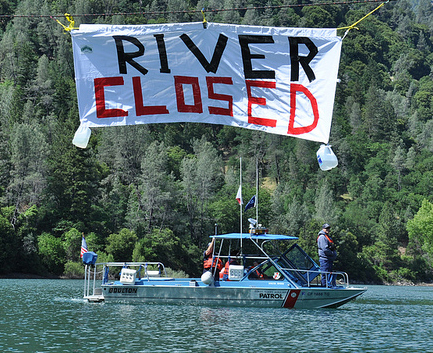 How good would it be in these enlightened times to hold a rational debate on the closed season? Wouldn’t it be refreshing to discuss genuine concerns against the backdrop of a modern world in which man has walked on the moon, sent space probes to Mars, built functioning sewerage systems, invented penicillin and regularly carries out organ transplants.

Alas that is not possible. We are doomed forever to be sermonised on the virtues of sack cloth and ashes. The world is flat, has always been flat and must remain so indefinitely. There’s no need for anything to change.

Maybe these folk should read, ‘Who moved my cheese?’

I genuinely struggled to comprehend how anyone with more than a single brain cell cannot grasp that a law, conceived in the 1800s by a non-angler is not overdue for review. And then the penny dropped. It’s sexual!

Major crimes are invariably motivated by two things – money or sex. Detectives seek out means, motive and opportunity. If that fails they veer towards cui bono – who benefits? Yep, I’ve read a hundred crime thrillers!

Well no one makes money out of the closed season except commercial fishery owners so it must be sex. What’s possibly sexy about a closed season? And then, whilst carrying out detailed research into dark corners of the web I discovered a practice called orgasm denial.

In the past have we have seen disgraced pillars of society claiming what they were doing was not sexual deviancy but actually in the interests of research. Sound familiar?

Then there are the unfortunate accidents, kind of premature ejaculation. Everyone’s showing as much restraint as they possibly can and then someone in the closed season camp gets caught on the Wye with his pants down. ‘Honest Mi’lud, I didn’t deliberately mean to transgress, I was just shadding about and perhaps shook it a little too vigorously…’

How about those who ask is it too early to start pre-baiting yet? Go on then, explain to me how that isn’t someone hoping for a big climax!

Then there’s the clearly embarrassed novices who feel they need to ask what equipment they’ll need in order to participate. No point in waiting for 3 months and then arriving unprepared.

Come on guys, tell me I’m wrong. This closed season lark is nothing to do with the fish. It’s all about the build-up, the anticipation, the ecstatic release that explodes at midnight on June 15th. Face it. The closed season is merely a perversion!

Unfortunately in orgasm denial (so I’ve read) the climax is frequently a big letdown. To quote Wiki: ‘If orgasm still occurs after removal of stimulation, it typically brings less pleasure than usual, and is considered a “ruined orgasm”, as opposed to being a “denied orgasm”.’

Yep, that’s June the 16th in a nutshell for most. All that build up and for what? One big damp squib. A ruined orgasm.

Of course, there’s the after-party commiserations, much talk about how great it was to be back, how good the river looked, how fantastic it was to hear birds singing and ducks farting, but you know what? For most anglers, opening day goes off half cock. It’s hardly worth a w**k…, a ruined one at that!

But you know what? I’ll be there myself, targeting fish that I know haven’t properly recovered from spawning, feeling somewhat sheepish. I’ll probably pack up early, disgusted with myself for jostling in the crowds, deflated and utterly disappointed; even more convinced that I would have done far less harm by fishing through March (and without doubt April as well) rather than wetting a line at any time during June.

Mainly I’ll feel let down by those who have been telling me for the past 3 months that today would be glorious and my orgasm, following that long drawn out denial would have made everything worthwhile. I know it won’t, because I have a conscience, a memory and more than two brain cells.

Truth is. We shouldn’t be fishing rivers on June 16th, should we? Certainly not for crucial species like barbel and chub. If you really care, stay home and have a w**k instead!

On the other hand, there’s always the chance you might smash your barbel PB on opening day with a nice, fat, spawny specimen…

One thing all anglers appear to agree on is a dislike for the tackle reviews in the press that are so clearly written to appease advertisers. Rubbish products given glowing reviews, adverts positioned adjacent editorial to reinforce branding, etc. There is no angling equivalent of Which? magazine. There’s nothing comparable to the reviews in car or electronics magazines. No bench testing, scientific measuring or testing to destruction. What we’re fed is tantamount to bullssh*t!

So how about an honest review? Try this one:

As an experienced and well travelled angler I have thoroughly field tested the Environment Agency’s Rod Fishing Closed Season. I have used it in various formats for approximately 54 years in all weathers. This has been an unusually long-term review and therefore, in my humble opinion, leaves little room for ambiguity.

Whilst the packaging is attractive the product itself is shoddy and not fit for purpose. Yes it will appeal to a limited audience in the same way there is a market for Penny Farthings and swingtips. If you are offered one of these, even at a bargain price, I urge you not to buy it. Without any shadow of doubt the product has serious flaws, particularly timing issues and, like narcotic drugs, the immediate after effects can cause catastrophic harm. I will go so far as to say it’s current design is unfit for purpose and should not be used here in the UK without significant improvements.

In-out, in-out, shake it all about…

There’s a Group on Facebook called The River Telegraph, or something like that. Seek and ye shall find. On face value it exists to promote debate about the closed season, at least it appears to be judging by the pinned post at the top of the first page. Perhaps I have misinterpreted.

Now I’m all for rational debate on important matters and there was mention in this thread that I had posted an article about the closed season here on this very web site so, being the generous sort of bloke I am I posted a link directly to the article.

Oh dear, that didn’t go down well. The owner of the Group promptly banned me from the group for what he regarded as a breach of his advertising policy.

But come on! If you are going to debate the closed season then at least do it openly and democratically. You really have to allow views from both sides of the divide to have their say, otherwise it’s not a discussion, it’s a sermon. Our electoral college allows parties like the SNP, UKIP, MRLP, etc., etc., to exist. They have their say, they have their followers. Doesn’t mean the country agrees with their policies, you simply have to provide a better alternative, otherwise you are left with a dictatorship.

By all means call it a campaign group in favour the closed season if you like, and then ban dissenting views, but don’t pretend the views you are currently sharing are balanced if they clearly are not.

Anyhow, what do I really care? Good luck with the Group (300 members). The exposure I have now afforded it here means upwards of 5,000 folk will be aware it exists over the next few weeks. The acid test will be whether the 300 will swell to 5,300, swayed by the dogma. Truth is most won’t even bother to investigate the River Telegraph now they are aware of the bias, which is a shame. You’ve missed a trick there.

I quickly moved on and all-but forgot the incident until I spent ages deleting thousands of emails that had accumulated in my inbox. Most folk would click ‘all’ then delete. Done in seconds. Me, I read them all again. Well, I skipped most but the exercise still took two days.

By gum, there were some pearls but even I had to pinch myself when I realised one was from the very bloke who had just banned me for publishing a link. Sent 2 years previously it read: ‘Letting you know I’ve placed a link to your site in regard to ******  which I regard as the best written and certainly the best written on the internet.’

What? Did I read that correctly? Be careful Lee. You’ll end up having to ban yourself at this rate!

One thought on “Closed Season Views – An Update”