When Thamesley ceased trading the race was on for anglers to snap up every last remaining bait dropper. Stu Walker bought every single one he could find and I’m told Steph Horak did the same. But droppers are expendables. You lose them, especially when there are rocks and snags to contend with.

18 months ago Stu and I attended Tacklefest at Peterborough to plug our DVDs. We were tucked away on a tiny stand next to Dinsmoresand took the opportunity to bend Nigel May’s ear about the Thamesley bait droppers. After all, Dinsmores is just the kind of company that trades in small items like that.

“I’m sure the original mould must be kicking around somewhere!” We urged him.

“What do you think?” Asked Stu, on the way home.

“Dunno. But he definitely seemed interested. Depends if he can trace the original mould, I guess. You never know.” 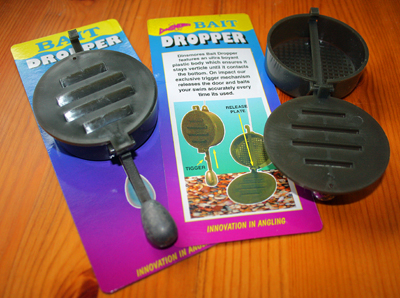 Well, you never do know. First thing I heard was on Steve Pope’s blog. He’d spotted one in a shop. Then Stu rang, “He’s only gone and done it! Thank God for that, I was down to my last Thamesley.”

So I contacted Nigel. “Did you find the old moulds then?” Apparently not. They had to make them from scratch but based on the old Thamesley. The plastic’s different and the colour’s olive green as opposed to black, but I like that. Otherwise they’re pretty much identical and perfect for baiting in tight areas.

At less than a fiver apiece I’d suggest that no self respecting barbel angler should leave home without at least a couple in his (or her) bag. Obviously with all this snow around I haven’t had an opportunity to put one through its paces on a river but I shall be giving it a whirl at the earliest opportunity.

The metal Seymodroppers are okay at close range when you’re more or less lowering them in but they’re heavy for casting and enter the water like a house brick at range. These are light and cast well. In fact just take a look at Stu using one on the Swale in our first DVD and you’ll see exactly what I mean when he flicks one underarm to a far bank bush.