Groundbaiting is often associated with catching coarse fish but rarely considered when targeting pike. However, groundbaiting is a very effective way of attracting pike into a swim, which you intend to sit on for a day or more. Rather than you searching for pike, this method is intended to get the pike to search for your bait by following the scent trail through the water. The groundbait also draws other fish into the swim, which will attract the attention of pike. 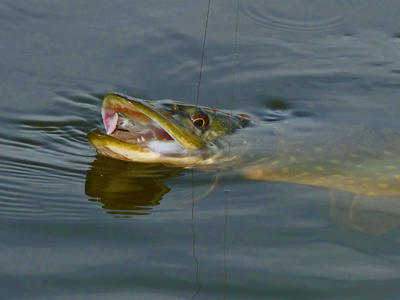 Before you start to make up your groundbait it’s important to have all the tools and ingredients to hand. It can be a messy and rather smelly job so best done in the garage or outside to avoid a domestic disturbance. I prepare my mix the night before fishing but use equipment which can also be used on the bank side, should I need to prepare any more while fishing. 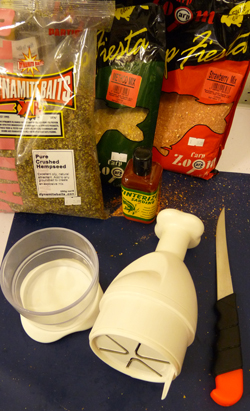 Chopping board – Any hard plastic chopping board will do but I’ve found that a bait bucket lid works just as well.

Knife – A sharp filleting knife is essential for slicing fish into chunks.

Blender – Electric blenders make light work of mincing up the fishy ingredients but I prefer a manual blender, which I can use on the bank too.

Cloth or tea towel – This is a messy old job and using a filleting knife with greasy hands is not recommended so you’ll constantly be reaching for the tea towel. It wont be going back into the kitchen draw after use so don’t get caught using a good one.

There are no hard & fast rules to what ingredients you use, it’s all down to personal preference. Where possible, I use whatever groundbaits & particle baits I have left from my summer coarse fishing and recycle any deadbaits, which have gone beyond their sell-by date. The softer and stinkier, the better.

Fish – any oily sea fish will do but I like to add at least some to match the bait I’ll be using on the hook to give the pike a few free offerings. This will create a scent trail for attracting the pike and other predators. Here I’m using Salmon Parr, they were free and not big enough for hook baits. 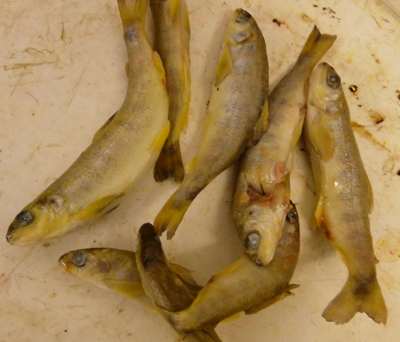 Groundbait – a mixture of standard and fish-meal groundbaits, typically designed for carp & coarse fish are used to bind the ingredients together. There are a number of base mixes readily available, specifically for pike groundbait but these are rather more expensive. Here I’ve used a method mix to help bind the ingredients, breadcrumb to bulk it out and a strawberry flavoured carp mix to add a scent attraction for coarse fish. The strawberry flavour also leaves your hands smelling a little more pleasant after mixing.

Particles – particle baits, hemp & maize are essential ingredients to encourage coarse fish to root around in the swim, causing as much disturbance as possible. Crushed hemp also produces an ‘explosive’ effect, which helps to spread & cloud the groundbait as it passes through the water column.

Flavoured Oils – Winterized fish oils are a concentrated additive. Only a small amount is needed to greatly exaggerate the fishy scent trail. The oil forms a slick on the water’s surface and travels a great distance through the water to distribute the scent. In this case I’ve chosen Sardine flavour to match my hook bait. 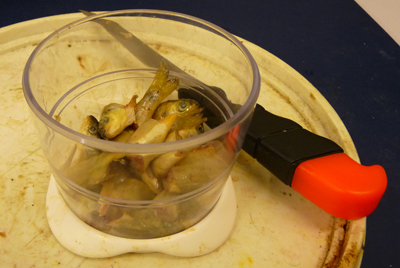 Step 2 – Gently blend the chunks to break down into a fishy ‘mush’. 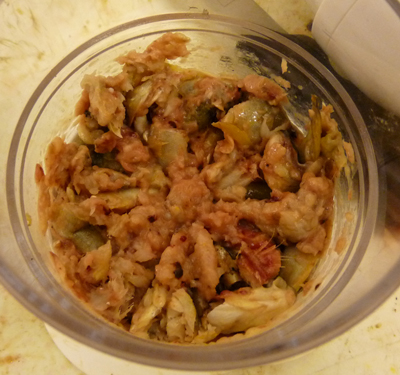 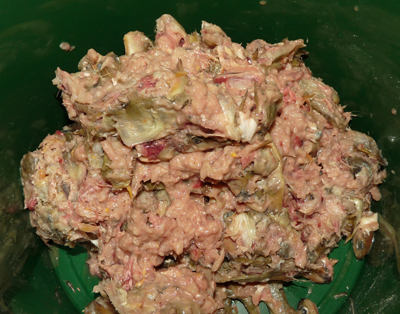 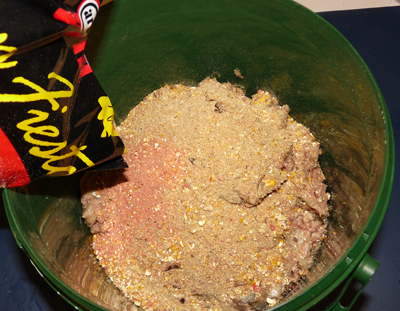 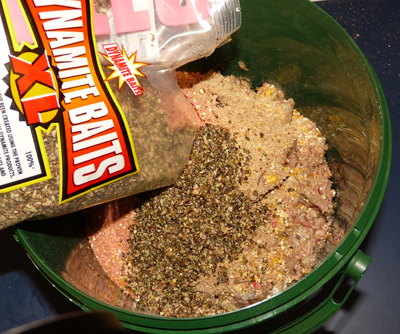 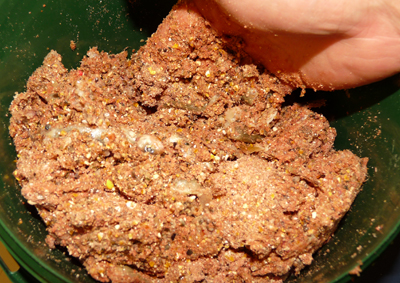 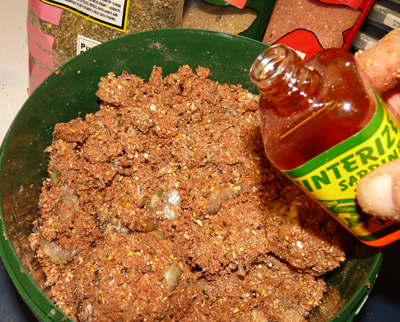 Step 5 – Roll into hand-sized balls, and your pike groundbait is ready to use or freeze for another day. If the mix dries out before using, simply add a little water to bring it back to the correct consistency for balling-up. 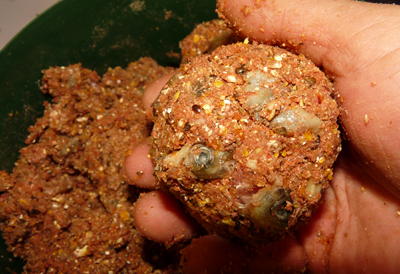 Tip – Pour a small amount of winterised oil over the finished groundbait balls just before you go fishing. The oil will be fully absorbed by the time you arrive at your venue so when you ball in the groundbait, more of the oil & flavour will pass down through the full depth of the water.

Once you’ve decided where to fish, pick an area in the middle of the swim to bait up and ball in at least half a dozen hand-sized balls. I usually only bait up one area within easy reach for baiting but you could bait up a number of different areas to suit the number of rods you intend using. Unlike coarse fishing, you don’t have to be too accurate. I like to cover quite a large area of around 10 – 20 square yards. Remember, you are not trying to bring coarse fish directly onto your bait. The sole purpose of the groundbait is to establish a scent trail throughout the water and get coarse fish to root around in the swim for as long as possible. Both actions will attract the interest of the curious pike.

Groundbaiting works so well for pike because it exploits it’s full range of specialist sensory organs, which the pike uses to find & catch it’s prey. Coarse fish have similar sensory organs, but in pike these have to be far more advanced to give it the advantage over it’s prey. I’ll cover this subject in more detail elsewhere but understanding the basics will help you to appreciate why groundbaiting for pike is so effective.

The pike’s most acute locator is it’s sense of smell, which it uses to detect blood, oils & smells over long distances. Pike are the perfect underwater scavengers and always on the lookout for an easy meal. They are quite capable of homing in to smells from a great distance. By adding oils to the bait and passing these through the entire water column, we are dispursing the scent and exploiting the pike’s sense of smell with the aim of drawing them into the swim from surrounding areas.

The pike’s hearing is rather different to our own. It uses it’s lateral line to detect vibrations in the water to help it to home into it’s prey. By using coarse fish groundbaits & particles we are encouraging prolonged fish activity in the vicinity of our hook bait. This generates movement & vibration, which further exploits the pike’s senses in a bid to attract it to the swim. The splashing caused as the groundbait hits the water can also attract the attention of pike.

As pike move into the swim, the prey fish will scatter leaving the pike to concentrate on the free offerings. However, they very often move directly on to the main bait, which offers a larger and easier meal.

For those who have any doubts about the advantages of using groundbaiting methods for pike – try it! You’ll be surprised at the results for putting in that little bit of extra effort. I recently fished with three rods at a large local Stillwater, catching eight fish during the one-day session. Six of them fell to the rod being fished over groundbait. It is quite possible that I would have caught these fish anyway but it does show that the pike were definitely more attracted to the groundbaited area. It is also very likely that these fish were not resident in the swim, but drawn in by the scent trail and fish activity generated by the gtroundbait. This is not a one-off result. I’ve used this method for many years with similar results. Try it and you wont go back! 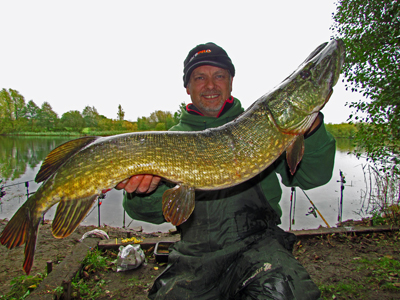 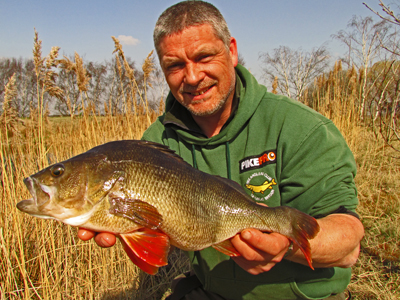 Groundbaiting is only really suitable for still or slow moving waters. In faster flowing rivers, the bait will be swept away too quickly in the current.

When fishing over groundbait, especially where free offerings are available, it’s important to use sensitive bite indication and hit runs without delay. Float-legered methods are ideal.

For tips on the safe handling and unhooking of pike, and much more, visit the PAC web site www.pacgb.co.uk. Better still, join online and help fight to preserve our sport for future generations.

If you have any pike fishing questions you can e-mail the author, alan@pikemaster.co.uk and he’ll try and cover them in a future article.

2 thoughts on “Groundbaiting For Pike”