A question was raised recently on the Fishing Magic web site relating to the movements of barbel by ‘Neneman Mick’. Rather than post this lot into the thread I’ve decided to park it here and if the barbel nuts out there want to know the answers then here they are. 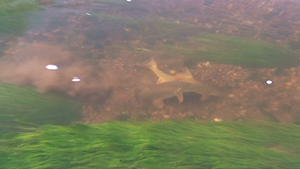 Barbel Spawning On The Swale

I was wondering though if barbel are renowned for travelling distances up and down rivers etc… that are known to have them present??? Do they tend to stick to certain areas that they know are safe and contain food ??? Do they only travel when it comes to spawning ???

Has any research ever been done regarding this,with perhaps marked or tagged fish ???

Well, a few years ago I researched a talk that I presented to various Barbel Society meetings and it contained the answers to much of what he asks so he may as well have it straight from the horses mouth. Whether it actually helps him in his quest for a big Nene barbel only time will tell but he’s keen to do it on his own terms rather than jump into ‘dead men’s shoes’ and you have to respect him for that. 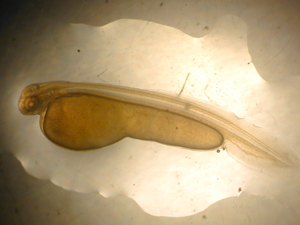 Here are some of the findings from I gleaned from scientific studies that have taken place and the sources where I found them:

Radio tracking of barbel in Yorkshire proved that some barbel moved regularly between the Rivers Nidd and Ouse.

It was demonstrated that barbel used each of these rivers at different times of the year.

Before spawning there is an upstream migration.

Barbel head for spawning beds during April and May.

Source: “The Fishes of the British Isles and North West Europe” – Alwyne Wheeler (1969)

Records of fish swimming over 25km have been recorded on obstacle free European rivers!

Females arrive at the spawning zones accompanied by between 8 and 30 males.

They all occupy the spawning zone.

The female discharges her eggs in the gravel and are immediately fertilized by the males present.

At the same time males further away approach the female and discharge their milt also.

The eggs of one female are fertilized by about 50 males

After spawning the fish come back to their point of departure

When released into the wild after being bred in captivity, stocked coarse fish, it seems, can travel at the wrong times.

Whereas native fish lie doggo while the sun is up and travel under cover of darkness, farm-bred fish will shift location in daylight. “Presumably, there is an advantage in native fish moving at night — they may be less susceptible to predation,” said Lucas. “The movements of reared fish, if they’re looking for food, may reflect the times of day when they’ve been fed in captivity.”

A total of 149 fish were recaptured and 105 of them (70.47 %) were considered as ”resident” because they were always recaptured in the same, relatively restricted (250 – 780 m) stream section, which always contained a pool and was demarcated naturally by riffles on both edges.

The remaining 44 recaptured specimens (29.53 %) belonged to the “mobile” part of population, their movements encompassing two (or exceptionally more) adjacent stream sections and at maximum a distance of 1680 m downstream or 2020 m upstream

The proportion of mobile barbel increased in the largest size classes    (451-550mm) http://www.easonline.org/home/en/FSBIProgramme.pdf 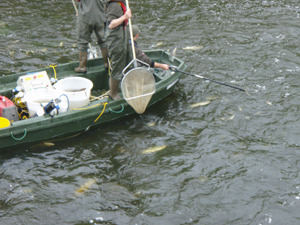 Whether a barbel actually feels ‘safe’ or even ‘unsafe’ at any time is purely emotive and makes an assumption that barbel have human traits and emotions which is rather unlikely. Barbel are wild creatures with a limited brain capacity. Whether a fish actually thinks at all is debatable. Perhaps instinct is what drives barbel and other fish. After all, does a swallow have to be taught to fly South for the Winter. Are pigeons fitted with Sat Nav?

I hope this helps Nick,

3 thoughts on “Migratory Behaviour In Barbel”