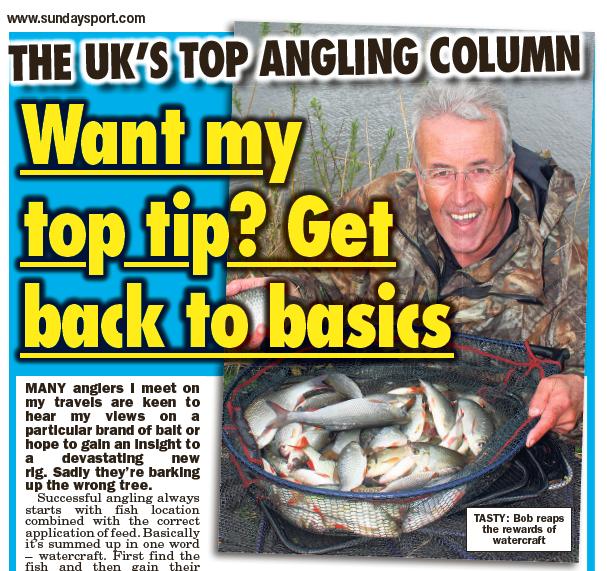 Many anglers I meet on my travels are keen to hear my views on a particular brand of bait or hope to gain an insight to a devastating new rig. Sadly they’re barking up the wrong tree. Successful angling always starts with fish location combined with the correct application of feed. Basically it’s summed up in one word – watercraft. First find the fish and then gain their confidence by getting them to eat your free offerings.

Of course you must apply a degree of stealth, cunning and dexterity to the mix but do that and you’re on your way to becoming a successful angler. At least you are during the warmer months. Twice in the past week I’ve thrown back the curtains at breakfast time to reveal a decidedly wintery landscape. This is Yorkshire and I’ve no doubt these haw frosts have not been evident everywhere but we’re rapidly skating towards December so we may as well accept that the season is on the change.

It’s interesting to note that 30 years ago, when I was heavily into my match fishing, a National Championship would be staged on the River Trent on the first weekend of October. Time and time again this coincided with the very first harsh frost of the winter and catches would suffer a nosedive. Maybe this is clear evidence that the climate is changing and winter now starts a little later than it used to.

But enough of speculation, it’s the impact it has on fish that interests me. Take commercial fisheries, for example. These heavily stocked waters where carp predominate tend to be heavily coloured from late spring through to round about now. Big carp can be caught in water that barely covers their backs. Indeed it’s a common sight to see tails and dorsal fins waving above the surface as carp root around in the margins.

Well, the days of easy pickings are over. Weights in excess of a hundred pounds, even two and 300 pounds will shortly be a distant memory. Anglers must revise their target weights and cut back on the amount they feed because carp in particular will be less active. It takes longer for fish to digest food in cold water so hammering bait into a swim is a recipe for killing that spot for a day or two, sometimes longer. Time to show a degree of caution.

As carp get less active they no longer root around in the bottom so much and as a result the water clears. A carp in shallow, clear water is a sitting duck for predators. Fortunately they are not completely stupid and retreat to deeper water. Initially this will likely be at the foot of the near or far shelves that predominate on every commercial fishery.

It’s quite easy to locate the exact point where the shelf ends and the lake bed flattens out by using a plummet. In waters where there are no overhanging trees or weed beds, as in most commercial fisheries, the only physical feature that attracts fish is the shelves and it is vital you recognise this.

Because the majority of commercial fisheries are manmade their construction tends to be very similar. Look at any river bank where the drainage engineers supposedly reduced the risk of flooding by what is tantamount to ecological vandalism and you’ll spot the identically graded slopes, each one a mirror image of the next river or drain. This angle of repose is pretty much replicated beneath the surface of each commercial fishery and as most of them have a maximum depth of between six and 8 feet you can practically calculate in your head exactly where the foot of the shelf will be.

Match anglers know this perfectly well. They call it two plus two. Puzzled? Then let me explain. Take the two elasticated tip sections of a pole, then add two more sections and 9 times out of ten the tip will be directly over the bottom of the near shelf. Obviously you need to use a plummet to make exactly sure but check out the match results in the press over the next few weeks and see just how many match winners tactics involve 2+2.

Where you needed carp to bulk out a winning weight in warmer months it’s vital you catch anything that swims in the cold because winning weights will be so much lower. Where it was recently carp or bust you can win, or at least frame, with a net of ide, bream, even roach but it’s so important that any bonus carp you hook into is landed. An old mate of mine used to say to me, ‘Tha can’t weigh bites, lad!’ In other words, you have to make the most of every bite and land every fish you hook, especially the bonus ones.

Of course most anglers will have spent the past 6 months using pellets as both feed and on the hook, or supermarket baits like luncheon meat and sweetcorn. Three baits that dominate during the summer months to which you can add floating baits on the waters that allow them.

Quite honestly you can put them all away for the time being because you will do far better if you concentrate on natural baits like maggots, casters and chopped worms. Chopped up worms are particularly effective in cold water and normally fed along with casters or dead maggots using a pole pot for absolute accuracy. If you chop up the feed into a near mush and present a one inch section of worm on the hook it will stand out and increase your chances of it being taken quickly.

Don’t rule out the potential for making big catches of roach in cold water. As carp drop down the shelf roach replace them in the margins on waters where they are prolific. Thirty pounds of roach is a realistic target on a lot of commercial waters these days. That’s a waste of time in summer but when you’ve had to dig out the thermals it’s a potential winning target.