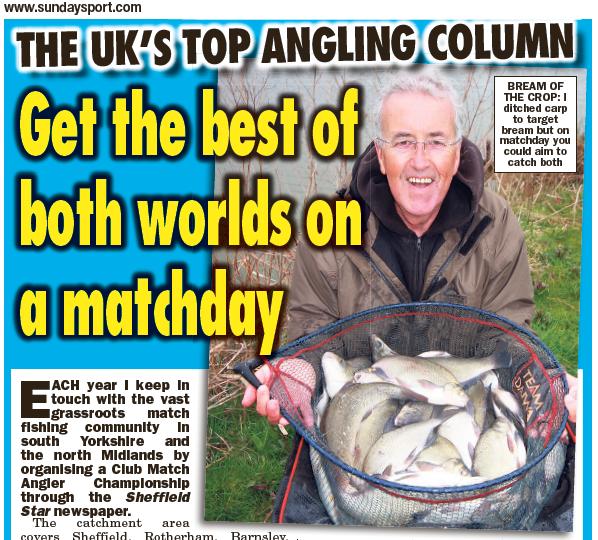 Each year I keep in touch with the vast grass roots match fishing community in South Yorkshire and the North Midlands by organising a Club Match Angler Championship through the Sheffield Star newspaper. The catchment area covers Sheffield, Rotherham, Barnsley, Doncaster and Chesterfield so we’re talking a lot of anglers.

Clubs are invited to submit their match results to me and the winner of each match gets a chance to fish a semi final event against a field of fellow match winners. From this match the twenty or so section winners go through to a grand final that carries £3,000 worth of sponsorship provided by Daiwa Sports. When I look back over the 17 years I’ve been organising the event I reckon the local angling community has benefitted from over fifty grand’s worth of sponsorship. An astonishing sum of money but it’s money well invested because it encourages participation as well as supporting fisheries and tackle shops right across the region.

Lodge Farm Fisheries just South of Doncaster will be hosting this season’s semi final in a few weeks time so this week I popped in for a practise session with my match organisers, Pauline and Geoff Hurt who have been invaluable to me since the very beginning. How their involvement came about I’ve no idea but I’ve never been one to discourage unpaid volunteers! Frankly I don’t know how I’d manage without them.

We set up on Signal Pond, aptly named because the lake lies right next to the East Coast Railway Line, and conversations tend to get drowned out by trains hurtling by in excess of a hundred miles an hour.

Because I wanted to get an idea of how it might fish under match conditions we set up on adjacent pegs with a ‘stopper’ angler beyond. Pauline and Geoff opted to target carp using pole and pellet tactics whilst I explored the silver fish potential using plain old waggler and maggot. Indeed I was doing my best to avoid catching carp.

The Hurts cupped in a little groundbait and pellets to start with and then switched between presenting sections of worm and soft pellets on the hook, loose feeding pellets over the top. Both caught carp almost straight away after which fish came steadily and then sport just got better and better. They both caught a few nice skimmers and ide but it was mostly carp that homed in on their pellet feed.

Interestingly they both fished more or less at dead depth. Going too far over-depth saw bites dry up which seemed pretty strange

Meanwhile I kicked off loose feeding around a dozen red maggots each cast at around two to three rod lengths out.  Not unexpectedly I experienced a much slower start but it wasn’t long before I got into a nice rhythm of casting, sinking the line, catapulting out some loose feed while the float settled and then getting a bite shortly after the bait landed on the deck. Bites were very delicate and tentative but by shotting the tip of my 3BB waggler float right down so it was barely visible meant I could see every movement. The bonus is you don’t miss many bites when you’re bream fishing and it wasn’t long before I was building up a good catch of my own.

After a couple of hours, in an attempt to increase my catch rate, I introduced a couple of balls of groundbait hoping to stimulate the bream into feeding more confidently. This had a negative effect for a while but half an hour later they returned and settled over the feed. Soon I was catching much more quickly but it was a tactical error that could have cost me dear in a match. There are no hard and fast rules but more often than not groundbait should be introduced at the start rather than over the heads of feeding fish. A lesson reinforced.

In between times my catch was boosted by a few nice roach and the occasional quality ide which averaged around the 2lb mark, but as the day wore on I started to get bugged by carp. Somehow I don’t think many of our semi finalists will regard them as an interference but they don’t half mess up a bream swim.

We packed up in mid-afternoon having shared a thoroughly enjoyable day’s fishing. The skimmers I caught averaged 4 to 12ozs apiece while the carp ran mostly from 2lb to 6lbs. It’s clearly easier to build a big weight with carp than it is with skimmer bream and you might think the best way to tackle the semi would be to go all-out for carp but maybe that won’t be the way.

You see, there were lulls in the carp action. We weren’t catching one after another all day long and if that were to happen in the semi final then the match winner would end up with about 500lbs in his nets and that is highly unlikely.

What happens in practise is you might catch two or three carp in quick succession but the disturbance causes the rest of the shoal to back off for a while. This is where having a second line will come into play.

For example, if you feed a skimmer bream line at 12 metres and off to one side of centre of your peg and then feed a carp line 6 metres out but off to the other side of your peg then you can easily create two separate catching areas within the same swim and you may then continuously build your weight by switching between the two lines, catching from one while resting the other.

Getting the feeding patterns right on both lines will require great concentration but only a fool would ignore the skimmer bream and put all his eggs in one carp basket.

I reckon by taking a couple of fish from each area in turn you’ll allow both shoals of fish to gain confidence and maybe increase your total weight by 20 per cent or more. It’s a conundrum that my anglers will have to work out. I’ll let you know how they get on.

Fishery Of The Week:

An excellent fishery situated between Sheffield and Chesterfield offering 4 trout pools and 4 coarse lakes so there’s something for everyone although few visitors manage to demolish the ‘Bellybuster’ £7 breakfast in the cafe. Most settle for the small or large versions at £3 and £5. The fishery offers holiday cottage accommodation as well as campers and caravaners. Corporate hospitality, family fun days, stag and hen parties with coaching by qualified staff are all part of the facilities.

Day tickets: Trout from £15 (catch and release) up to £20 for 3 fish, Coarse £5 with reductions for concessions and afternoons