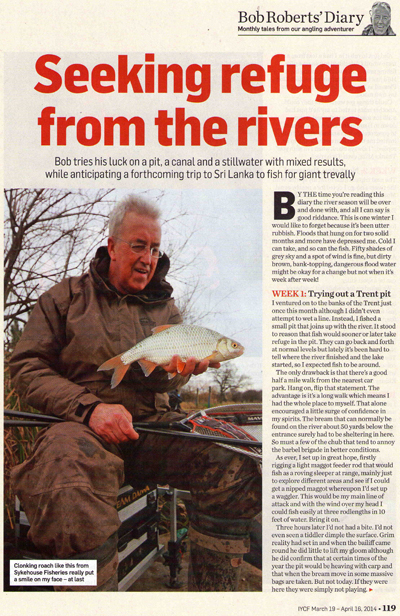 By the time you’re reading this diary the river season will pretty much be over and done with and all I can say is good riddance. This is one winter I would like to forget because it’s been utter rubbish. Floods that hung on for two solid months and more have depressed me. Cold I can take, and so can the fish. 50 shades of grey sky and a spot of wind is fine, but dirty brown, bank topping, dangerous flood water might be okay for a change but not when it’s week after sodding week!

I ventured onto the banks of the Trent just once this month although I didn’t even attempt to wet a line. Instead I fished a small pit that joins up with the river instead. It stood to reason in my mind that fish would sooner or later take refuge in the pit. They can go back and forth at normal levels but lately it’s been hard to tell where the river finished and the lake started, so surely there would be some fish around.

The only drawback is that there’s a good half a mile walk from the nearest car park. Hang on, flip that statement. The advantage is it’s a long walk which means I had the whole place to myself. That alone encouraged a little surge of confidence in my spirits. The bream that can normally be found on the river about 50 yards below the entrance surely had to be sheltering in here. So must a few of the chub that tend to annoy the barbel brigade in better conditions. It goes without saying that roach and skimmers, maybe gudgeon, too, – yes, I really was that desperate, would be laid up in the calm water.

As ever, I set up in great hope, firstly setting up a light maggot feeder rod that would fish as a roving sleeper, at range, mainly just to explore different areas and see if I could get a nipped maggot and then I set up a waggler. This would be my main line of attack and with the wind over my head I could fish easily at 3 rod lengths in 10 feet of water. Bring it on.

Three hours later I’d not had a bite on either rod. I’d not even seen so much as a tiddler dimple the surface. Grim reality had set in and when the bailiff came round he did little to lift my gloom although he did confirm that at certain times of the year the pit would be heaving with carp and that when the bream move in some massive bags are taken, but not today. If they were here they were simply not playing.

And just to rub it in I had a text from a mate who’d I’d declined to join on a pike fishing session in favour of coming here. He’d just landed a lump weighing 25lb 12oz. Pleased as I was for him it did nothing for my own mood.

Could things get worse? Yes they could. Another mate text me to say he’d just had a 3lb 1oz roach on waggler and caster down in Hampshire. When I texted back to congratulate him and ask why he’d not invited me to join him on the long trip he replied, ‘I always blank when I’m with you’. Thanks Mike, even if it is true! 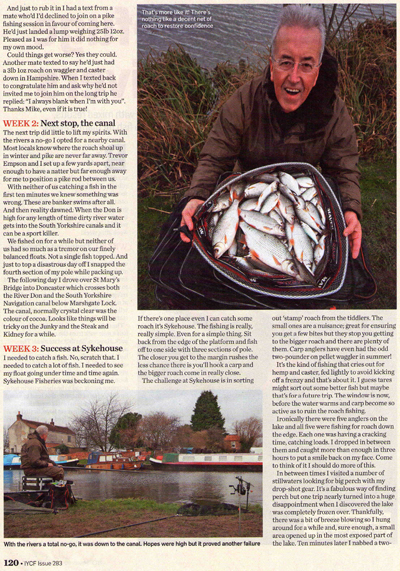 The next trip did little to lift my spirits. With the rivers a no-go I opted for a nearby canal. Most locals know where the roach shoal up in winter and pike are never too far away. Trevor Empson and I set up a few yards apart, near enough to have a natter but far enough away for me to position a pike rod between us.

With neither of us catching a fish in the first ten minutes we knew something was wrong. These are banker swims after all. And then reality dawned. When the Don is high for any length of time river dirty water gets into the South Yorkshire canals and it can be a sport killer.

We fished on for a while but neither of us had so much as a tremor on our finely balanced floats. Not a single fish topped. And just to top a disastrous day off I snapped the fourth section of my pole while packing up. Brilliant!

The following day I drove over St Mary’s Bridge into Doncaster which crosses both the river Don and the South Yorkshire Navigation canal below Marshgate Lock. The canal, normally crystal clear was the colour of cocoa. Looks like things will be tricky on the Junky and the Steak and Kidney for a while.

The fishing is really, really simple. Nay, it’s easier than that. Dead simple. Even for a simple thing. Sit back from the edge of the platform and fish off to one side with 3 sections of pole. The closer you get to the margin rushes the less chance there is you’ll hook a carp and the bigger roach come in really close, probably to keep out of their way.

The challenge at Sykehouse is in sorting out ‘stamp’ roach from the tiddlers. The small ones are a nuisance to be honest. Great for ensuring you get a few bites but they stop you getting to the bigger roach and there are plenty of them. Carp anglers have even had the odd two-pounder on pellet waggler in the middle of summer!

It’s the kind of fishing that cries out for hemp and caster, fed lightly to avoid kicking off a frenzy and that’s about it really. I guess tares might sort out some better fish but maybe that’s for a future trip. The window is now, before the water warms and carp become so active as to ruin the roach fishing.

Ironically there were five anglers on the lake and all five were fishing for roach down the edge. Each one was having a cracking time, catching loads of fish. I dropped in between them and caught more than enough in just 3 hours to put a smile back on my face. Come to think of it I should do more of this. 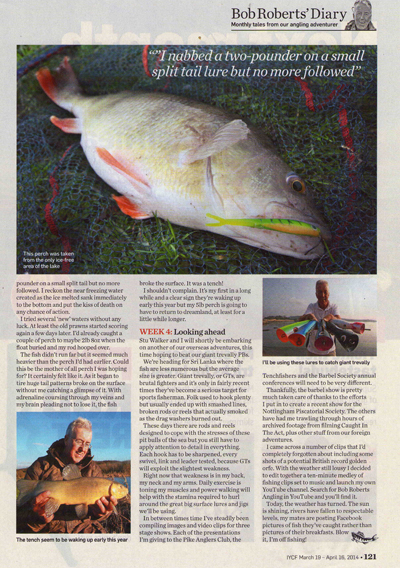 In between times I visited a number of stillwaters looking for big perch with my dropshot gear. It’s a fabulous way of finding perch but one trip nearly turned into a huge disappointment when I discovered the lake was completely frozen over. Thankfully there was a bit of breeze blowing so I hung around for a while and sure enough a small area opened up in the most exposed part of the lake. Ten minutes later I nabbed a two-pounder on a small split tail but no more followed. I reckon the near freezing water created as the ice melted sank immediately to the bottom and put the kiss of death on any chance of action.

I tried several ‘new’ waters without any luck. At least the old prawns started scoring again a few days later. I’d already caught a couple of perch to maybe two-and-a-half pounds when the float buried and my rod hooped over. The fish didn’t run far but it seemed much heavier than the perch I’d had earlier. Could this be the mother of all perch I was hoping for? It certainly felt like it. As it began to tire huge tail patterns broke on the surface without me catching a glimpse of it. With adrenaline coursing through my veins and my brain pleading with me not to lose it, the fish broke surface. It was a tench. A POXY tench!

I shouldn’t complain. It’s my first in a long while and a clear sign they’re waking up early this year but my 5lb perch is going to have to return to dreamland, at least for a little while longer.

Stu Walker and I will shortly be embarking on another of our overseas adventures, this time hoping to beat our giant trevally PBs. We’re heading for Sri Lanka where the fish are less numerous but the average size is greater. Giant trevally, or GT’s as we prefer to call them, are brutal fighters and it’s only in fairly recent times they’ve become a serious target for sports fisherman.

Folk used to hook plenty but usually ended up with smashed lines, broken rods or reels that actually smoked as the drag washers burned out. These days there are rods and reels designed to cope with the stresses and strains of these pit bulls of the sea but you still have to apply attention to detail in everything. Each hook has to be sharpened, every swivel, link and leader tested, because GT’s will exploit the slightest weakness. Right now that weakness is in my back, my neck and arms. Daily exercise is toning my muscles and power walking will help with the stamina required to hurl around the great big surface lures and jigs we’ll be using. The things we do to catch a few fish, eh?

In between times time I’ve steadily been compiling images and video clips for three stage shows. Each of the presentations I’m giving to the Pike Anglers Club, the Tenchfishers and the Barbel Society annual conferences will need to be very different. Thankfully the barbel show is pretty much taken care of thanks to the efforts I put in to create a recent show for the Nottingham Piscatorial Society. The others have had me trawling through hours of archived footage from our filming sessions for Caught In The Act, plus other stuff from our foreign adventures .

During this time consuming process I came across a number of clips that I’d completely forgotten about including some shots of a potential British record golden orfe. With the weather still lousy outside I decided to edit together a ten minute medley of fishing clips set to music and launch my own Youtube channel. Search for Bob Roberts Angling in Youtube and you’ll find it. Let me know what you think.

And today, just as I am wrapping up this column the weather appears to have turned. The sun is shining, river levels have fallen to respectable levels, my mates on Facebook are posting pictures of fish they’ve caught rather than pictures of their breakfasts. Blow it, I’m off fishing!