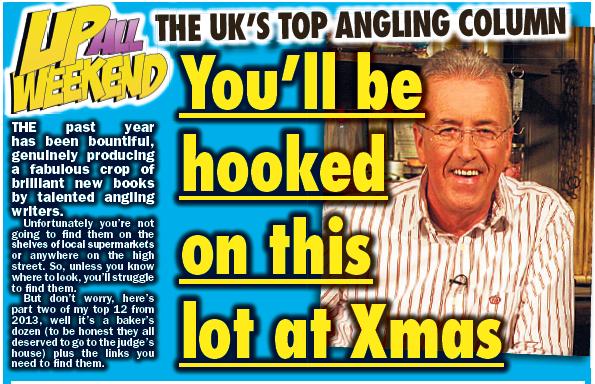 More Books With The X(mas) Factor

The past year has been bountiful, genuinely producing a fabulous crop of brilliant new books by talented angling writers. Unfortunately you’re not going to find them on the shelves of the local supermarket or anywhere on the high street so unless you know where to look you’ll struggle to find them, but don’t worry, I’ve picked out my top 12 from 2013, well it’s a baker’s dozen (to be honest they all deserved to go to the judges house) plus the links you need to find them.

The Angling Artists by Tony Meers

Here’s a book to grace any coffee table. It showcases the work of current artists and those of the recent past and it is simply beautiful. Throughout the book Meers describes each guest as an artist followed with a story by, or about, the person and, of course, every single page is illustrated with the finest angling artwork to be found. Artists featured included Bernard Venables, Ted Andrews, Robin Cook, Peter Curtis, Gareth Fareham, Andrew Field, John Grant, Trevor Harrop, Maurice Ingham, Keith Linsell, Mick Loates, David Miller, Robert Olsen, Maurice Pledger, Karen Sarkar, John Searl, Richard J Smith and Denys Watkins-Pitchford. It’s a book you will admire and get lost in. Everyone should own a copy.

The Biggest Fish Of All by The Perchfishers

Of all the books produced by single species groups The Biggest Fish Of All stands head and shoulders above. It is as comprehensive a work as anyone could wish for covering the biology of the species in-depth through to worldwide distribution, artists who have painted perch, a list of each perch weighing over 4lbs that was reported to the press since 1989 giving month, captor, weight, bait and venue but it’s the guest contributions that had me drooling. Everyone seemed happy to share their knowledge without holding back. More than 50 members and friends contributed to a book that is simply breathtaking.

Barbel Tales from The Barbel Society

Another book by a single species group and yet another fine effort. Thirty-eight chapters, each one a tale about times spent fishing for barbel and submitted by the good and the great of the Society. It all adds up to a lot of fireside enjoyment at a time of year when only the hardiest souls will bother going out to try and catch one. If you only on the more reliable summer months then you’ll certainly get your fix here. If asked to highlight just one chapter I’d instantly select Dr Terry Baxter’s Family Double Act. Near brought a tear to my eye, it did.

If you get your angling information through the angling media you’ll probably never heard of Alan Rawden, but trust me, mention his name to any of the top specialists and they’ll know exactly who you mean. Alan has been a lifelong specialist angler who’s managed to avoid the limelight. He never craved fame. He just got on with the business of catching fish and keeping his head down, preferring to keep his captures close to his chest. Its only when you look down the chapter headings of the book you begin to realise he it was no accident he happened to be fishing some of the most significant waters in the country just at the right time. The TC Pit, Swithland, Sywell, Half Pit, the Wensum, Dorset Stour, Avon, Trent and so on. Here for the first time he reveals the dedication and effort that went into his incredible catch list but just remember, it took him half a century to come up with this book. Don’t expect another any time soon. Buy one while you can but let me warn you, at 350 pages long and tipping the scales at a hefty 1.4Kg it’s no flimsy pamphlet, it’s a ‘proper’ book.

This isn’t Mick Brown’s first book bit it’s by far his finest. Mick was pretty much forced into a full-time angling career when his wife died and was left to raise two young children alone. He had little option but to give up a job in engineering and living off his wits, writing articles, developing and testing tackle for various sponsors. Eventually this led a book contract, making DVDs and a chance meeting with Matt Hayes produced a television career although looking back now he realises he signed away the rights to future income by not studying the contracts closely enough and made the same mistake with his TV work. But this isn’t a book about complaining, it’s Mick, warts and all, giving his considered views on catching pike through example. It certainly got me to thinking about lots of things I should be doing when I pike fish and that’s the hallmark of a good book.

Loosely described as a life in the year of a roach enthusiast, this isn’t a diary of events that takes place over the course of one year. It’s a book split into the four seasons with tales drawn from several decades neatly filed under the headings of Summer, Autumn, Winter and Spring. Emotionally it’s hard to describe how I felt after reading the diaries because it took me back to what now seems a distant era and brought into focus what has been lost through poor river board drainage practises, chemical fertilisation and blight of all blights, the influx of freshwater cormorants that threatens the very survival of river roach. Yet here’s a bloke who claims to have caught more than 900 specimen roach in a relatively short space of time, an astonishing tally. I see no reason why Everard would exaggerate and I therefore take him at his word, but here in South Yorkshire I’ve almost as much chance of seeing a unicorn as catching a 2lb roach, never mind one of the many three-pounders he catches. So yes, it’s a book that fills me with jealousy, with regrets and a yearning for the past in equal measures.

Take a history book based on a single item of fishing tackle, limited in geographical distribution, enjoyed its heyday in the 19th Century, that is no longer in production, written by a pastry chef and you have a recipe for Eton Mess. However don’t be fooled into thinking one man’s obsession will be a dull read because this incredibly well-researched book is nothing of the sort. Beautifully illustrated and neatly designed it’s a fascinating read from start to finish. From answering the obvious question ‘what is a London roach pole’, Nadell expands into the makers’ art, the craftsmen who made them, accessories, baits, tactics, even the social influencing. He moves on to the masters of pole fishing, the great matches, how anglers travelled and the golden years of the River Lea. Here’s a book that truly justifies the large format.

For reviews and extracts from these and other angling books check out the books section of my web site: www.bobrobertsonline.co.uk

Whilst you’re there please do check out the trailers for my latest DVDs in the DVD section.