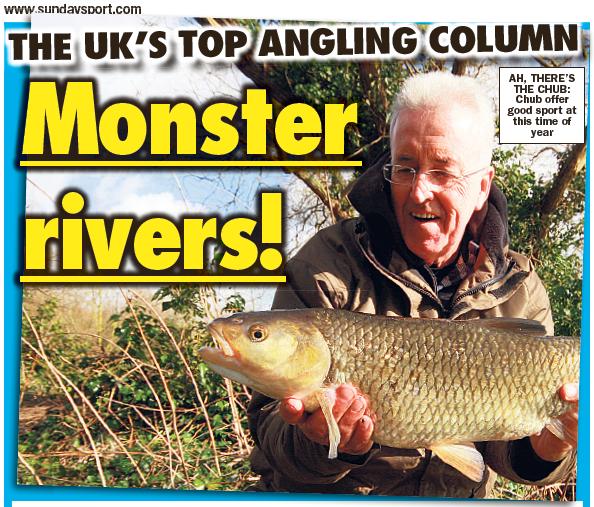 What a washout this winter has been. I’ve never known the rivers to be out of sorts for so long and just when the monsoon begins to subside the Environment Agency plays its joker. This is the very last weekend of the river season. After next Friday all rivers will be closed to coarse angling and remain that way for 3 months. Talk about frustrating.

The 93-day closed season is hopelessly out of date. It was introduced in 1878 by Sheffield MP Anthony John Mundella, a man who liked to be called AJ and was a former Sherriff of Nottingham. He didn’t even go fishing yet he took it upon himself to lay down a law to protect coarse fish at a time when it was common to take fish for the table. It’s a fishy story and some suggest the objective of his bill was to keep riff raff away from the riverbanks during the salmon season and I can see exactly where they’re coming from.

Whatever the rights or wrongs things are not going to change in a hurry so the best you can do is dust the cobwebs off those rods and make the most of the remaining days. In past seasons I’ve enjoyed some truly red letter days as the season was drawing to a close but quite how the rivers will fish this time there’s no telling. One thing’s for sure, there will have been a few interesting redistributions going on with river fish going swim about and garden pond ornamentals going in the opposite direction.

The fear is that a lot of fish might never get back to the rivers as levels fall. I’ve witnessed this on many occasions with rescue missions being a feature being a feature of receding levels. A friend of mine who works for the Environment Agency helped to rescue a number of huge carp back that had escaped from the River Severn a few years ago. It’s not too difficult to spot a fish as big as a medium sized pig but smaller species don’t stand a chance. They’ll remain hidden until the last few puddles dry out by which time foxes, mink, otters and predatory birds will have had a feast.

But enough doom and gloom, how can we make the best of the few remaining days? It’s around now that barbel begin to start feeding in earnest providing the water temperatures are rising and not falling. If the water is carrying a little colour, so much the better. Simple feeder tactics with pellets on the hook will sort them out. Ignore the shallow, fast water where you might expect to catch them in summer. Look for steady flow over gravel and you won’t be far away.

Perch are at their fattest right now. Look for cover in the shape of obstructions and bushes. Anywhere that the flow is deflected and creates a slack. My favourite bait right now would be a big juicy lobworm. They are likely to be shoaled up so if you catch one there will be others around. Obviously, if you don’t catch, get on the move. They have to be around somewhere.

Pike will be ready to spawn but you’ll perhaps need a little local knowledge to track them down because they will be gathering in numbers. This is the time to nail a truly huge river pike. Unfortunately they might have other things on their mind but a livebait or a smelly sea bait might just grab their attention. Try lamprey, sardine, smelt or an oily mackerel. If you catch a small pike it’ll be a male for certain. They tend not to grow much bigger than about 7lbs. It’s the females that can top thirty pounds. However, the males are chasing the females right now so the big girls won’t be far away.  Stick at that swim and you could reap the rewards with a biggie.

If it’s cold and frosty, or if the water is running crystal clear, then a good grayling is always on the cards. Grayling are mostly found in the upper reaches of rivers rubbing shoulders with trout. Some rivers produce monsters, on others you’re lucky to catch one weighing more than 12oz, but they do put up a splendid scrap and it’s not called the Lady of the Stream for nothing. Few fish can compare with the beauty of a large grayling, all purple and red, that creamy belly, erect dorsal and spots scattered along the flanks. It’s the peacock of the river. Tactics will be dictated by the river you fish and whatever rules and restrictions are in force but it’s mostly float fishing or light legering. Small worms, sweetcorn and maggots, when allowed, are the best baits.

Then there’s one of my favourites, the chub. Chub are voracious feeders when they’re in the mood but be prepared to stay mobile. You might catch half a dozen chub from a swim but such great sport doesn’t usually last. The best thing to do is catch a few and move to the next likely looking spot and catch some more. Chub are bold feeders if the conditions are good but they soon become cautious. Don’t waste time flogging a dead horse hoping for just one more. Get roving and catch three or four more. Then get roving again! You can always return to the swims that produce later in the day.

I’m old school when it comes to my chub fishing. Baits like bread and cheese paste are my favourites but there’s little that a hungry chub will not eat and this includes pellets, luncheon meat, raw steak, prawns, mussels, maggots, casters, corn, boilies, pastes, worms and indeed anything else you want to put in front of them.

Of course, I’ve now got myself all excited and feeling dead keen to be out on the riverbanks for the final curtain. You watch it go and rain again! That would just be so unfair. Enjoy yourselves folks but do take care. Those banks will be covered in a fine film of silt and very, very slippy. You won’t be the first angler to end up in the drink.

River Trent, A1 Pits, Near Newark

As this is the last chance to promote a river for 3 months how about this cracker of a venue. You’ll find more than 100 swims spread over 1.5 miles of the River Trent. You can park behind every peg and the fishing is sensational. It’s up to you whether you target specimen carp, barbel, chub, bream, pike, zander or even catfish.

Location: Drive north on the A1 from Newark and you will cross the river. Leave the A1 at the next exit and head back along the B6325 until you reach South Muskham village. Turn left at the roundabout onto Church Lane. The entrance to the fishery is on your right immediately after the railway crossing. Sat Nav users can enter the postcode: NG23 6EQ Phone: Contact the Bailiff (Steve) on Tel:07970209433