I’m in shock today, but really I shouldn’t be. David Hall passed away this morning after a lengthy illness. It was not unexpected, at least not in my mind, yet I’m angry. Not with anyone in particular, just myself. 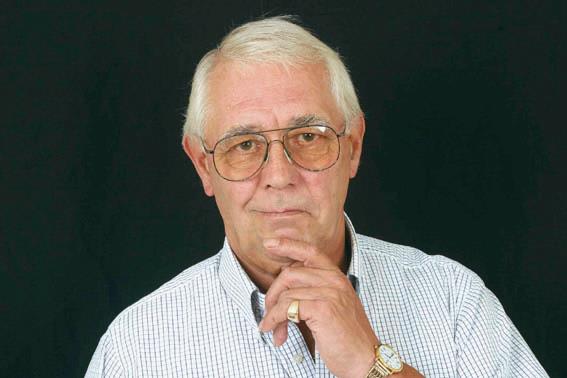 You see, and trust me my wife will back me up here, I’ve been meaning to write to him this past couple of months. I’ve discussed it with Sue several times but somehow it was hard to find the right words. Much easier to prevaricate, so I sat on the fence, umm-ed and ah-ed, twiddled my thumbs and put things off. It was one of many things I was intending to get around to.

Now I never will and it hurts because I owe much to David in that he gave me so many wonderful opportunities, provided sound guidance and gave the confidence to write with authority, but more than this he royally entertained me.

I cut my teeth reading Coarse Fisherman magazine long before we became friends and ironically I started out writing for his rival and arch-enemy, Colin Dyson. Those were the days when editors were editors. They had opinions and clout, wrote proper leader columns and stood for something. And boy did they not see eye-to-eye!

For my part I did my best to patch up their differences, even getting them around the same dining table and riding in the same car together but it was always going to be a big ask, yet I found them both to be fabulous company.

When Colin Dyson left Coarse Angler magazine it was almost inevitable that I would end up writing for David and we rapidly became close friends. David was a magnetic personality, a consummate raconteur and generous host. We both loved music, he had the most fabulous CD collection and many nights were spent in his front room putting the world to rights. We went to concerts together, did road trips, attended events, parties and generally had a whale of a time. 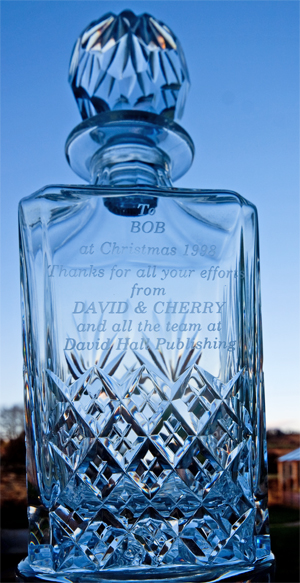 On the subject of editing, David rarely altered my copy but once when he did and in doing so created more than a little controversy, I asked why. He answered, ‘I just changed it to say what you meant to say!’ That was David all over.

Alas I reached a crossroads where it was necessary to decide whether I wanted to become a full-time journalist or press on with my railway career and the later won out. There simply weren’t enough hours in each day to do both. I gave David 6 months notice and made plans for the future. 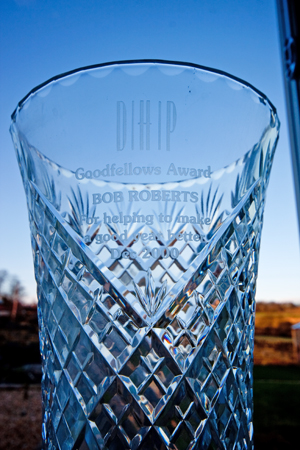 We remained friends and David was one of the first on the phone after my wife died inviting me to stay with him and Cherry. Indeed David gave a remarkably touching yet funny eulogy at her funeral. Alas when you are no longer working together it’s so easy to drift apart. People lead such busy lives these days. And then there’s this wonderful phrase that David used so often in our conversations, ‘We each have our time together’, he would say.

As David relinquished the reigns, inch-by-inch; as others took over the commissioning of articles, the creation of Editors in Chief and all that goes with it, I found myself on the outside. Our friendship was drifting. My days as a member of the inner circle were over and presumably we had shared ‘our time together’ and that was fine by me.

I still had enormous respect for him, for Cherry and the fantastic journey he had been a huge part of. From the day he took ill I knew I needed to write and share my thoughts and my feelings, to thank him sincerely for all the opportunities he gave me. Guess I’ve blown that opportunity. 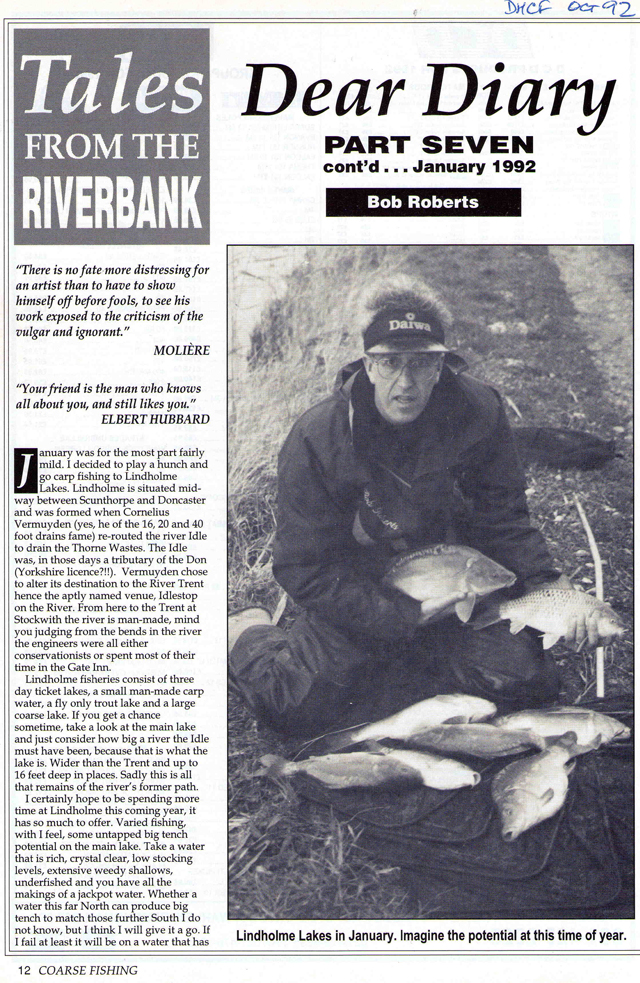 Ten years ago I began compiling a book. It is 75,000 words long and in truth I may never finish or publish it. It charts my life and times in angling and is called Tales From The Riverbank which happens to be the title of the very first series of articles I wrote for David. Here’s an extract relating to my earliest times with David:

End Of An Era

After Colin left, Coarse Angler struggled on for a short while in the hands of Jim Baxter. Colin and Jim did not see eye to eye and I’m being generous here. It was Colin’s worst nightmare. I was in Colin’s camp so it quickly became evident that it was time for me to move on.

For some while I’d been feted by David Hall and the door to switch camps and write for Coarse Angler’s biggest rival was wide open. Okay, it’s not exactly on a par with the Ashley Cole, Chelsea and Arsenal saga but in those days you only wrote for one magazine. Loyalty was paramount and you simply weren’t allowed to churn out the same regurgitated pap in every single publication willing to take it as appears to happen all too often these days. If you wrote for Colin you did it exclusively. It was as simple as that.

Colin and David fought like cat and dog with each other through their editorials. They clearly had opposing viewpoints on many subjects yet I found them both to be charming men. They called a spade a spade and if they had anything to say you can rest assured it would be to your face. I liked that a lot. Still do. I can’t be doing with folk who are nice to your face and then stab you in the back.

But it was difficult playing pig in the middle some times. Shortly before I left Coarse Angler I was having a pint in the rowing club at Evesham after fishing a press match on the Avon. I’d spent quite a while talking with David and we’d arranged to meet up for a meal with our wives later that evening. Just as I was leaving Jim collared me, “I want you to promise me you’ll never write for that man…”

Well, there’s a final nail in every coffin and that, for me, was it. I took no persuading after that to switch camps. It was a good move, too, because Coarse Angler’s days were numbered. From being the biggest selling and only angling magazine in the UK with an ABC audited circulation figure it went rapidly downhill and ceased publication. Sometimes you really shouldn’t try to fix what isn’t already broken.

Writing for David opened up a whole new world of opportunity. David’s style in those days was light years removed from the very professional and business-like organisation he runs today. S

at in what is now the guest bedroom in his home, but was then an attic which doubled as a bustling little office housing desks, computers, fax machine and all the other trappings, he topped up our Scotch glasses and with a sweep of the arm he embraced the room and said, “Look at this Bob, we might not be the most professional set-up but we have lots of fun!”

And they certainly did. If you were in David’s team you knew about it. He was generous to a fault. David is a very good friend to have and with the support of Cherry he entertains like a king. I’ve lost count of the times I’ve stayed at the house.

I was returning from a fishing trip one evening and dropped by to leave some photographs. “Oh it’s great to see you, Bob, come in and have a drink.” “I’d like to David but I’ve been fishing for the past couple of nights and I need to get home, have a bath and get changed.” “Don’t worry about that, come in. By the way, we’ve a dinner party tonight and Riva’s had to drop out. Would you mind staying to balance the numbers?” “David, I’ve only got the clothes I stand up in.” But mere trivialities like that were nothing to David, who looked through the clothes to find the man.

I suppose I wrote some of my best work for David. In those days we had writers with genuine character in the magazine, blokes like Geoffrey Bucknall, Ron Lees, Richard Wade, Mike Winney, Chris Binyon, Brian Morland and Vick Gillings, to name just a few, blokes who wrote about real life and the fun of fishing rather than endless ways to tie a knotless knot.

The content of my column was not that dissimilar to this book. It told of where I’d been fishing, who I’d met, what and how I caught and it was an absolute pleasure to write. With David you got freedom.

You also got tempting offers. “Look Bob, when are you going to give up that job of yours and come and work with us?” My God it was tempting. But I’ve never been sure that working full-time in angling would have worked for me. Deep down I reckon it would have ruined my enjoyment of the sport and I simply couldn’t risk that.

Writing for David meant that I could drop the odd article into Match Fishing and Advanced Pole Fishing as well as Coarse Fishing. It also opened up an opportunity to use my photographic skills when I did several commissioned shoots for him. For example I was Match Fishing’s official photographer at the Home Pierrepont World Championships and having a press pass meant I could get right down to the waterside.

I was the first person to shake Bob Nudd’s hand and congratulate him when the whistle went. A priceless memory and I got a hell of a kick out of seeing my pictures splashed across the front covers of several magazine in the coming months. I also got to cover other big events, too. They were heady days.

Rest in peace, David. Thank you for all the wonderful opportunities you gave me and the great times I was privileged to share with you. I suppose I can say for the very last time, we’ve had our time together, and that leaves me feeling very sad.