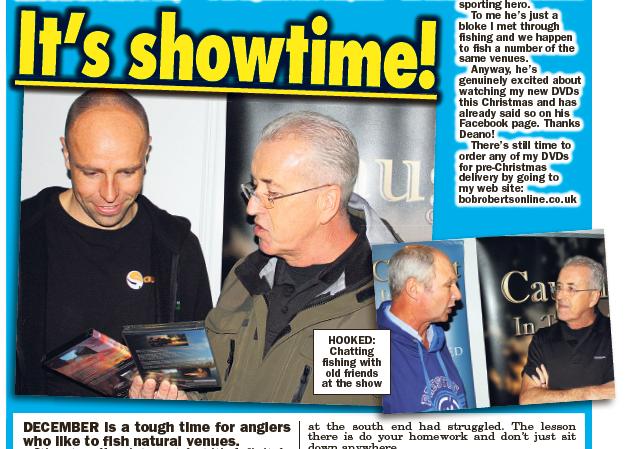 Sharp eyed readers will already realise (I hope!) that the weekly article I publish on here first appeared in the Weekend Sport newspaper exactly one year earlier. If you want to read what I’m writing about currently you’ll need to visit a newsagent. 😉

What I find scary is it feels like these events happened a couple of weeks ago rather than a whole year earlier. Time flies. Make the most of it.

December seems an odd time to host an angling show, it being so close to Christmas, but the Northern Angling Show 2 staged at Event City, Manchester, last weekend was reasonably well attended with the organisers claiming that around 5,000 customers passed through the doors over two days although I’m sure the pre-show publicity boasts that it’s the UK’s Biggest Tackle Show will be contested by the organisers of ‘The Big One’ at Sandown Racecourse, which drew three times as many attendees in 2013.

I like shows, there’s a great buzz, you meet your customers face-to-face and it’s a rare opportunity to catch up with old friends in the trade. When I wasn’t manning my own stand I was kept busy on the stage delivering talks with the likes of Des Taylor, Tom Pickering and Paul Garner. Stu Walker and I showed some clips from our latest DVDs and shortly afterwards Tom Pickering, a former World Champion and current manager of the England Feeder Team, made a beeline to our stand to say how the underwater footage had ‘blown him away’.

‘I always thought that sound played a big part in fish behaviour but when you showed those tench crunching on hard pellets it really got me thinking.’

I guess praise for our DVDs doesn’t come higher than that.

It was good to catch up with Dean Macey, the former Olympic Decathlon Gold Medallist. It’s funny you know. To those who follow athletics he’s a national sporting hero. To me he’s just a bloke I met through fishing and we happen to fish a number of the same venues. Anyway, he’s genuinely excited about watching my new DVDs this Christmas and has already said so on his Facebook Page. Thanks Deano!

There’s still time to order any of my DVDs for pre-Christmas delivery. Full details here.

December is a tough time for anglers who like to fish natural venues. It’s not really winter yet but it’s definitely not Autumn. Give me a period of settled cold weather and I’ll be happy on the rivers but waking up to ten degrees one day, a frost the next followed by high winds and maybe a heavy downpour makes deciding what to fish for, when and where so very difficult. As the weather blows hot and cold, so does the fishing but much of the time it’s ultra tough.

Sometimes it is best to take the longer view and leave those chub, grayling and pike sessions until the New Year and make the most of what is on offer at commercial fisheries. I appreciate they are not everyone’s cup of tea but at this time of year the crowds have dwindled and you can enjoy a challenging days fishing.

Gone are the halcyon days when two, three or even four keepnets were needed by match anglers. You’re now scratching around for bites. Twenty or thirty pounds is a good target to aim for and instead of setting out your stall to catch carp, carp and more carp you might want to focus on bream, ide and roach instead. This is when natural baits like worms, maggots and casters begin to pay off. Pellets are harder for a fish to digest so if you want to use a bigger bait in the hope of picking out a carp consider using bread, luncheon meat or sweetcorn.

Chatting with tackle shop owner Lenny Squires the other day after he’d just returned from a winter league match was interesting. All the leading weights on two lakes came from the northernmost end of each and those drawn at the south end had struggled. The lesson there is do your homework and don’t just sit down anywhere. Head for the more productive pegs and make sure you’re fishing at the right time of day. Quite often the fish won’t switch on until the afternoon. Those who make a crack of dawn start often pack up disgruntled before the day’s action has begun.

Wriggling Out Of A Mess

Supermarket giant Sainsbury’s has landed has itself in hot water by claiming the store’s jellied eels came ‘from sustainable sources around the British Isles’. Unfortunately the European eel has been a recognised endangered species since 2010 and the International Council for the Exploration of the Sea (ICES) recently published advice that the status of eel remains critical, that urgent action is needed and measures affecting production and escapement of eels should be reduced to as close to zero as possible until there is clear evidence that both recruitment and the adult stock are increasing.

Oops! So where did Sainsbury’s find this sustainable source of British eels? I’ll tell you, According to Justin King CBE who heads up the megastore, the eels are sourced from New Zealand which is hardly on our doorstep, now is it?

Unfortunately the New Zealand long and short fin eels are also under threat so switching a supply source to the other side of the world is hardly responsible and makes no sense at all for a business which likes to boast about sustainability. Surely it would have been better all round if the problem had been addressed in a more ecologically manner by withdrawing eel meat from sale completely. Selling eels, even when sourced from abroad, perpetuates the supply and demand cycle rather than changing the eating habits of consumers.

Having admitted its error let us hope that Sainsbury’s take a careful look at the source of all its fish products. After all they admitted labelling farmed salmon incorrectly only a few months ago. Provenance is very important to customers and supermarkets have a responsibility to be absolutely precise about how food is labelled so that we as customers can take informed decisions.”

A choice of eight well stocked pools but right now Arles is fishing really well to waggler and bomb tactics. Double maggot is all you need for good sport with skimmers, F1’s, roach and carp to 5lbs. The fishery boasts both a decent tackle shop and spacious cafe seating up to 100 customers and at this time of year it’s nice to know you can get a hot meal from somewhere with a Food Standards Agency five star rating. The fishery is on Hay Lane, Hadley, Droitwich, Worcestershire, WR9 0AU.