Where does the time go? I thought that retiring from my full-time job would leave me with loads of time to do everything I want to do but there simply aren’t enough hours in a week. So where shall I start?

School holidays mean Sue and I can escape for a well deserved break (on her part anyway) so half the month gets lost in terms of fishing.

I suppose an update on the filming is in order. Don’t get too excited but filming for the first volume of Barbel Days and Ways is completed, well apart from the links, final editing and laying over the music and sound effects, a few voice-overs here and there, designing a cover, negotiating a deal on the pressing, setting up a distribution web site, and a few other minor technicalities…

I guess to say it’s finished is a bit premature. But we’re getting there! All the fish we need have been caught and loads more besides. I’m keeping my fingers crossed that lots of keen barbel anglers will still be able to wake up on Christmas morning and find one in their stocking. Indeed, if the next two filming days go well, one with Matt Brown and one with Paul Owens, it’s fair to say Volume Two will be in the can and we’ll have two films available for Christmas.

The thing is, we originally intended to make the films one hour long with four separate segments, each around 15 minutes long, filmed on different rivers or featuring a different method. We aimed to go down the ambient route of Passion For Angling where you watch the film and then can’t wait to go fishing. We wanted misty dawns, glorious sunsets, animals, birds, flowers, the sort of film where you can almost smell the dew. And that’s what we created.

When we did a short screening (20 minutes) in front of a few invited guests (critics) and asked what they thought, to a man they said we’d achieved our goal and created something that was much better than they had expected, BUT…!

The big ‘but’ was, they would all have liked to see a bit more instructional content. That really made us sit up and think because if I see one more ‘How To Tie A Knotless Knot’ feature I swear I’ll gouge my own eyeballs out with a baiting needle. It wasn’t the road we wanted to go down, so we took a long hard look at how other genres get instruction across without interfering with the real content and I have to say we found the solution in a cooking programme. Thank you Gordon Ramsey!

Unfortunately, adding technical content, as short and snappy as it is, means each segment stretches out for a few more minutes and you know what? These minutes add up. Suddenly the one hour DVD is upwards of 75 minutes, plus credits, plus trailers and you’re looking at how to fit that on a disk without losing quality. Again, the answer is invariably out there somewhere and as I tap away on the keyboard Stu is on the case. He’s found a manufacturer and we’re awaiting delivery of some samples to test. If they measure up and can be purchased at the right price we’ll be up and running in no time and you get a DVD that runs for the best part of an hour and a half.

Ah well, if it was easy everyone would be at it. Needless to say we’ve had some more good barbel and some have come from the least expected places but you’ll have to wait for the films to find out where from.

Okay, so what else have I been up to? Well, I spent a day with Kev Green from Improve Your Coarse Fishing magazine on a tiny little river chasing chub. These weren’t big chub by any means and if truth be told the original idea was to catch them on floaters but the weather put paid to that one. Instead I roved around and stalked them out on free-lined bread. It was great fun and I caught loads but purchasing the wrong loaf cost me lots of fish.

I don’t know what it is with modern breads but they’re ever so stodgy. Time was when you’d struggle to keep bread on the hook, nowadays you struggle to strike through it. A light squeeze on the hook shank leaves it floating on the surface, a firm squeeze means you struggle to strike through it. But we caught enough to make a decent feature but the real bonus was finding a big fish. I’ll not say what it was but I set about catching it for the cameras and we succeeded. Kev was knocked out with it and he’ll be saving that one for the June 09 issue which will coincide with the start of the next river season.

The planned trip to Wales was a roaring success, although it raised as many questions in my head as it resolved. It’s a fair old trek to Builth Wells from South Yorkshire so I set off at an ungodly hour in order to reach the Caer Beris Manor hotel just in time for breakfast. Better still, Peter Smith, the owner and a brilliant chef to boot, said, “Let’s not bother with the hotel, I’ll cook.” So a slap-up breakfast soon materialised. 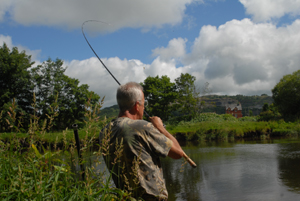 We decided to fish the town waters run by the Groe Park Angling Club. Day tickets are available but if you stay at Caer Beris manor the fishing is free providing you pick up a ticket at reception. The Wye here is wide and majestic. It’s also brimming with chub and to prove it I had six walloping bites in my first six casts, each one producing a chub that went the better part of 4lb. Bish, bash, bosh, just like that, and I was beginning to wonder just what sort of catch I might finish up with. And then the fun stopped, the party was over and I simply couldn’t buy a bite.

I scratched my head, tried fishing a waggler at full depth, mid-water, shallow; I tried straight lead, closer in, further out, lower down the peg, all to no avail. I couldn’t buy a bite. Okay, I picked up an odd fish at (long) intervals but nothing that you could make any sense of. The fish simply stopped feeding. Whether that’s because they feed early mornings and go off in the middle of the day, I don’t know. Or perhaps a slug of cold water come down the river from a shower in the hills, who knows?

Day two saw us down on the Rectory length and if you think the town waters look good then try the Rectory Pool. When I die and go to heaven I expect it’ll look something like this place. Wow, it really is spectacular. But the fish didn’t want to play. We tried the pool, we tried above the bridge and we eventually settled into a shared swim below the bridge, more to enjoy each other’s company than anything.

And you know what? We started catching fish. First on corn, then on pellets, to end up with a similar catch to the day before. And then they stopped feeding. Completely. Weird – like a light switch on – off – on – off. When they were on they were suicidal, when they were off it was as if there were no fish in the river. And you know what? We never saw a single fish, other than an odd small trout, rise. Not one splashy chub roll in two days.

Ah well, that’s what keeps us going back.

Peter came up with an interesting suggestion while we were chatting. “Would I like to host a fishing weekend at the hotel in October? Say half a dozen guests staying a couple of nights B&B. We’d hold a celebration dinner on the middle evening and in between we could all share a couple of days chub fishing with maybe a late barbel if someone got lucky? My roll would be to coach and guide the anglers, with his help and then I get to stay on for a couple more days and fish to my hearts desire.

How could I refuse an offer like that? At the moment we’re desperately trying to organise a date because I’ll be in India for half the month chasing the elusive mahseer down the Nepalese border but if you fancy going it alone you can check out Peter’s web site, www.caerberis.co.uk or call the hotel on 01982 552601.

I’m in the throes of setting up my own web site at the moment because I’ve decided to create an anthology of my old articles stretching back to the days when folk used glass rods. I’m planning to give away not one but two books on the site in monthly instalments so that will be jolly. The book publishing world is in such a mess these days and the print runs so small that after the tax man has taken his cut you might just as well not bother, so why not give it away instead?

If the site goes ahead it’ll be up and running by November and I’ll make sure that new content goes on there every month including at least one chapter from each book and four articles. The idea is you’ll be able to drop back on a weekly basis and catch up on the latest articles. All for free. How good is that?