It’s really scary how our lives fly by. This was my 50th diary article for Improve Your Coarse Fishing magazine yet it barely seemed like five minutes since the first one. Oh well, here’s to the next fifty… 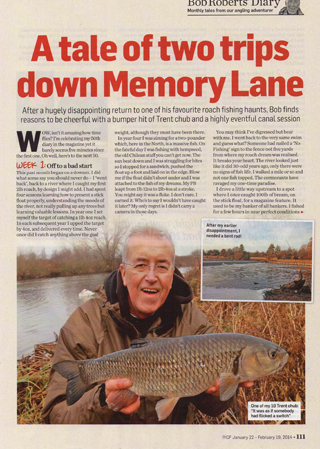 The month began on a downer. I did what some say you should never do. I went bank. Back in time it seemed to a river where I caught my very first 2lb roach, by design I might add. I had spent four seasons learning how to present a stick float properly, understanding the moods of the river, not really pulling up trees but learning valuable lessons. In year one I set a target of a one pound four ounce roach. In each subsequent year I upped the target by four ounces and delivered every time. Never once did I catch anything above the goal weight although they must have been there.

In year four I was aiming for a 2-pounder which, here in the North, is a massive fish. On the fateful day I was fishing with hempseed, the old Chilean stuff you can’t get now. The sun beat down and I was struggling for bites so I stopped for a sandwich. Pushed the float up a foot and laid on in the edge. Blow me if the float didn’t shoot under and I was attached to the fish of my dreams. My PB leapt from 1-12 to 2-4 at a stroke. You might say it was a fluke. I don’t care. I earned it. Who’s to say I wouldn’t have caught it later? My only regret is I didn’t carry a camera in those days.

You may think I’ve digressed but bear with me. I went back to the very same swim and guess what. Someone has nailed a no fishing sign to the fence not 5 yards from where my roach dream was realised. It breaks your heart. The river looked just like it did 30-odd years ago only there were no signs of fish life. I walked a mile or so and not one fish topped. The cormorants have ravaged my one-time paradise.

I drove a little way upstream to a spot where I once caught a hundred pounds of bream, on the stick float, for a magazine feature. It used to be my banker of all bankers. I fished a few hours in near perfect conditions and never had a bite, never even saw a sign that fish existed. I roamed around and tried half a dozen other swims. Nothing. Not a bite. It’s heart breaking. Yet I’m still drawn back, but for how long I don’t know. Sometimes you have to face up to the inevitable. 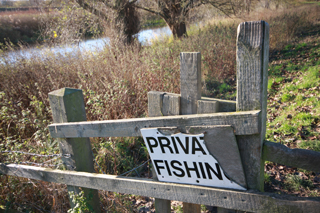 I needed to get a bend in my rod and what better way is there than to catch a few chub. I often think about something Chris Yates wrote, ‘I talk to the river. I ask it questions with bread and she answers me with chub’, or something like that. It’s ingrained in my skull and runs through my consciousness whenever I’m winter chubbing.

I decided on another trip down memory lane. 30 years ago I used to fish a small stretch of the Trent at Syerston called Lady Pit Farm. It’s actually a channel off the main river opposite Hazelford Weir and is itself split by a weir. I’ve probably not fished it for 25 years and last had a look 10 years ago in the company of Archie Braddock. Two guys were fishing and one nodded in my direction and said to the other, ‘Tha knows who that is, dun’t tha?’ His mate replied, ‘Of course ah do. I’m not stupid. It’s Tom Pickering!’

Anyway, because the fishing, controlled by Scunthorpe Pisces, is days only I parked my van in the downstream end car park and made the long walk upstream. My intention was to suss out the pegs as I walked up and then fish my way back spending no more than 20 minutes in each swim, ensuring I would be able to squeeze out the last vestige of daylight and jump straight in the van without breaking any rules.

It was never going to be easy on a low, clear river but I caught a nice fish in the first hour feeding liquidised bread through a cage feeder and fishing a lump of flake on the hook. Caught another around midday from the weirpool but I knew deep down that my best chances still lay ahead. In the last hour, now fishing close to my van, I had ten chub. It was as though someone had flicked a switch and the river came to life. 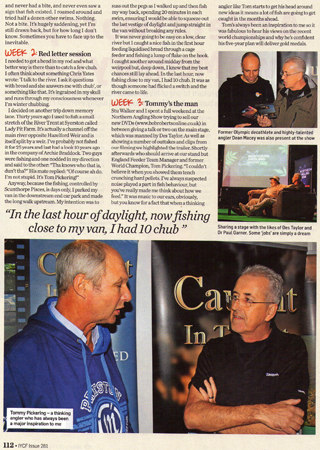 Stu Walker and I spent a full weekend at the Northern Angling Show trying to sell our new DVDs (www.bobrobertsonline.co.uk) in between giving a talk or two on the main stage which was manned by Des Taylor. As well as showing a number of outtakes and clips from our filming we highlighted the trailer. Shortly afterwards who should arrive at our stand than England Feeder Team Manager and former World Champion, Tom Pickering. ‘I couldn’t believe that when you showed them tench crunching hard pellets. I’ve always suspected noise played a part in fish behaviour but you’ve really made me think about how we feed.’ It was music to our ears, obviously, but you know for a fact that when a thinking angler like Tom starts to get his head around new ideas it means a lot of fish are going to get caught in the months ahead.

Tom’s always been an inspiration to me so it was fabulous to hear his views on the recent world championships and why he’s confident his five-year plan will deliver gold medals. Later we both shared a stage with Paul Garner and Des talking fishing. Some jobs are a dream. It’s like being invited to play football at the Emirates, or Old Trafford. I could happily have spent the whole of the day chatting with those three. Talk about diverse opinions. 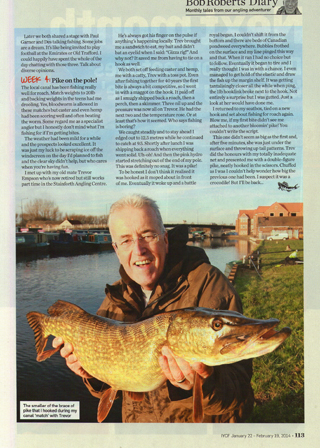 The local canal has been fishing really well for roach. Match weights to 20lb and backing weights in the teens had me drooling. Yes, bloodworm is allowed in these matches but caster and even hemp had been scoring well and often beating the worm. Some regard me as a specialist angler but I honestly don’t mind what I’m fishing for if I’m getting bites.

The weather had been mild for a while and the prospects looked excellent. It was just my luck to be scraping ice off the windscreen on the day I’d planned to fish and the clear sky didn’t help but who cares when you’re having fun.

I met up with my old mate Trevor Empson who’s now retired but still works part time in the Stainforth Angling Centre. He’s always got his finger on the pulse if anything’s happening locally. Trev brought me a sandwich to eat, my bait and didn’t batter an eyelid when I said, ‘Gizza rig!’ And why not? It saved me having to tie on a hook as well.

We both set off feeding caster and hemp, me with a catty, Trev with a toss pot. Even after fishing together for 40 years the first bite is always a bit competitive, so I went in with a maggot on the hook. It paid off as I smugly shipped back a roach, then a perch, then a skimmer. Three-nil up and the pressure was now all on Trevor. He had the next two and the temperature rose. Or at least that’s how it seemed. Who says fishing is boring?

We caught steadily without pulling up any trees. To stay ahead I edged out to 12.5 metres while he continued to catch at 9.5. Shortly after lunch I was shipping back a roach when everything went solid. Uh-oh! And then the pink hydro started stretching out of the end of my pole. This was definitely no snag. It was a pike!

To be honest I don’t think it realised it was hooked as it moped about in front of me. Eventually it woke up and a battle royale began. I couldn’t shift it from the bottom and there are beds of Canadian pondweed everywhere. Bubbles frothed on the surface and my line pinged this way and that. When it ran I had no choice but to follow but eventually it began to tire and I really thought I was in with a chance. I even managed to get hold of the elastic and draw the fish up the margin shelf. It was getting tantalisingly closer all the while when ping, the one pound hook link broke next to the hook. Not entirely a surprise but I was gutted. Just a look at her would have done me.

I returned to my seat box, tied on a new hook and set about fishing for roach again. Blow me, if my first bite didn’t see me attached to another bloomin’ pike! You couldn’t write the script.

This one didn’t seem as big as the first one and after five minutes she was just under the surface and throwing up tail patterns on the surface. Trev did the honours with my totally inadequate net and presented me with a double figure pike neatly hooked in the scissors. Chuffed as I was I couldn’t help wonder how big the previous one had been. I suspect it was a crocodile!

But I’ll be back…