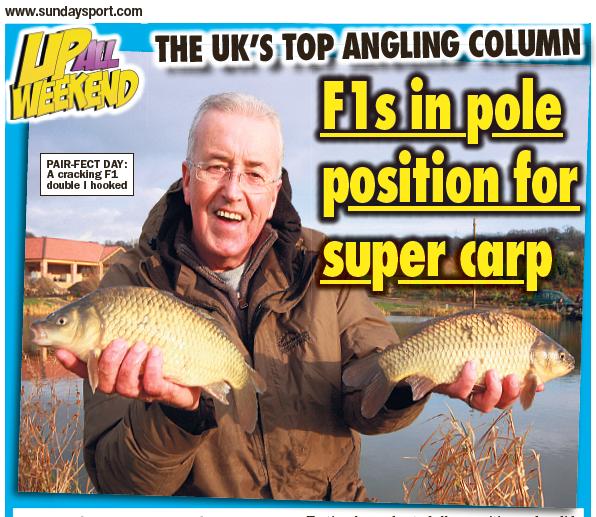 In Pursuit Of A Modern Day Frankenstein

My father never caught an F1 carp. Neither did Richard Walker or Bernard Venables, nor any other angler of that generation. They simply didn’t exist. So how come this species of fish has become the mainstay of modern match fishing? Where did it come from, and more to the point, why?

For answers we have to look back at the earliest commercial match fisheries. Generations of match anglers had grown up scratching moderate weights of silver fish from rivers, drains, canals and stillwaters but the outlook was looking decidedly bleak. Water Boards were hell bent on dredging the life out of rivers. Pollution was rife and the impending doom of unacceptable predation levels was looming. Some bright sparks decided the future lay in heavily stocked stillwaters with cafes, toilets, parking behind each peg not to mention lots of rules that, to the angler, seemed hell bent on preventing you from catching too many fish.

The target species of choice was the common carp. Carp are hardy creatures that thrive in turbid waters and low oxygen levels. They’re quite easy to catch, too, providing you stock enough of them into a water so they’re competing for food. To the match angler this was instant heaven. Instead of struggling to catch a few stunted roach from the local canal they were now knocking out a hundred pounds in five hours with ease.

Unfortunately there was a huge flaw in the concept. Carp grow big and they grow very quickly. The more anglers fished the more food the carp ate and fish that were 6 inches long when stocked soon began to pack on 3 or more pounds each year. Great if you are a fish farmer, not so great when these beasts start smashing your tackle. Poles that were designed to be slim and lightweight, ideal for stretching 12 metres across the local cut would snap like twigs under the strain of a 12lb carp.

An industry grew up around these fisheries. Stronger, heavier poles, elastic systems that would safely tether a small boat, floats that didn’t disintegrate after catching a few fish, fine diameter double strength lines and lightweight powerful hooks that were chemically sharpened. Tactics changed out of all recognition and so did baits. Pellets became an essential while maggot farms went out of business.

Match records tumbled daily. The current UK 6-hour match record is close to 700lbs which is a ridiculous weight of fish. You needed the strength of a weight lifter combined with the stamina of a long distance runner.

All this was possible because carp grow fast and eat like pigs, but unfortunately they don’t stop growing when they reach a convenient size which then results in lots of very expensive carbon poles being smashed. Anglers soon start complaining to fishery owners when that happens and vote with their feet unless the owner removes the big carp and replaces them with small ones. That’s an expensive and futile process.

Something had to change and sure enough it did in 1996 when Riverfield Fish Farm, in Kent, produced an F1 hybrid carp by crossing common carp with the much smaller crucian carp. F1 means first filial generation, a species created by selective breeding rather than genetic modification.

F1s are a match anglers dream. They don’t generally grow much bigger than 3lbs so they can be landed on light tackle. They are immune to diseases like the notorious KHV and they exhibit hybrid vigour, or to give it the scientific name, heterosis, which means they are much more adept at finding food and evading predators than their parents. The biggest plus of all is they are happy to feed throughout the winter months and that makes them a hit with both commercial fishery owners and customers alike.

But there’s a downside. Where a common carp might live for 40 years or more, F1s tend only to survive for 5 or 6 years. Great news if you are a fish farmer, not so great if you’re a fishery owner. Riverfield Fisheries aren’t complaining as they now produce 7 tons of them every year and each 4-6 inch F1 retails at around the pound mark. Sounds like a great business to me.

The Environment Agency has concerns about the distribution of F1s and stocking can only take place when a Section 30 notice is issued. Under no circumstances will the Agency allow F1s to be stocked in rivers or waters where pure crucian carp exist but as most are designated for manmade fisheries, specifically excavated for the purpose of match fishing there’s no problem. Indeed most of the waters containing F1 carp today didn’t even exist 25 years ago.

Some anglers treat F1s with scorn, describing them as the spawn of the devil and refusing to fish waters containing them. More fool them. Without F1s and commercial fisheries angling would be the poorer because the few remaining wild fisheries unaffected by cormorants and otters would be in huge demand.

I spent a pleasant afternoon on my local commercial, Barnburgh Lakes, managed by former England International Gary Jubb, this week. We were both members of the highly successful match team Daiwa Golthorpe in our younger days so it was good to catch up. The weather was kind to us as we set up on adjacent pegs and we caught loads of fish while putting the world to rights, as you do. With matches on two of the three lakes despite this being midweek there can be no doubting the popularity of fisheries like this and the ubiquitous F1. Angling wouldn’t be the same without this little monster!

Many anglers have been turning to canals while the nations rivers are flooding into the field and those targeting the Grand Union Canal have been catching some outstanding perch running to over 3lbs on lobworms and livebaits. When the canal is coloured you can catch plenty of roach and skimmers using maggot or pinkie over a little groundbait. When the water is clear bread punch comes into play.