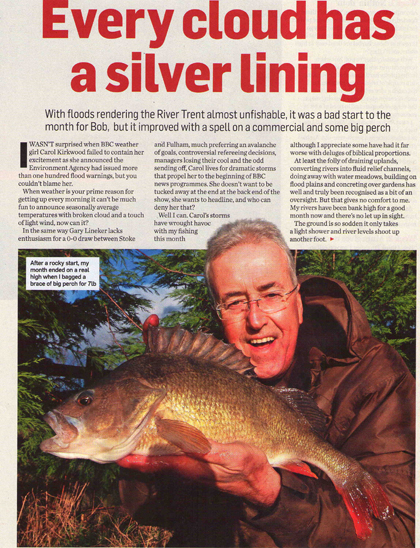 Quite how Carol Kirkwood managed to contain her excitement as she announced the Environment Agency had issued more than one hundred flood warnings I’m unsure, but you couldn’t blame her. When weather is your prime reason for getting up in a morning it can’t be much fun to announce seasonally average temperatures with broken cloud and a touch of light wind, now can it?

In the same way Gary Lineker lacks enthusiasm for a goalless draw between Stoke and Fulham, much preferring an avalanche of goals, controversial refereeing decisions, managers losing their cool and the odd sending off, Carol lives for dramatic storms that launch her onto the BBC news headlines. She doesn’t want to be tucked away at the end of the news, she wants to be right at the top of the programme and who can deny her that?

Well I can. Carol’s storms have wrought havoc with my fishing this month. I appreciate some have had it far worse with deluges of biblical proportions. At least the folly of draining uplands, converting rivers into fluid relief channels, doing away with water meadows, building on flood plains and concreting over gardens has well and truly been recognised as a bit of an oversight. But that gives no solace to me. My rivers have been bank high for a good month now and there’s no let up in sight. The ground is so sodden it only takes a light shower and the rivers to shoot up another foot. Now according to angling experts this is the perfect time to catch barbel. This is when they go rampaging around eating anything that is thrown at them. Barbel are dead easy in flood conditions, aren’t they?

Well actually they’re not! Not when temperatures are low and fluctuating. I was feeling pretty hard done to after blanking on a couple of trips – I say blanking but I did catch a nice eel. My fishing partner on each occasion also blanked leaving me on the verge of despair and in need of a bit of encouragement.

I rang Archie Braddock. Archie and I go back a long way. He’s turned 70 and still as enthusiastic as a seven-year-old. Archie practically lives next to the river and knows it backwards. He can nip out whenever conditions are right and be fishing within ten minutes. He’d be catching, surely?

‘I’ve given up Bob!’ He told me on the phone. ‘I’ve been out ten times for just 3 fish. It’s the stillwaters for me until things settle down.

As I write the rivers are still high and I too have turned my attentions to somewhat more reliable fishing although I’ll part with a mention of my eel shenanigans. Taking pictures of eels is a might tricky. The secret is to lay them on their backs, stroke their tummies and they go to sleep, just like this one in the photo. I swear this one was almost snoring as it lay there but each time I tried to pick it up and take a picture it was as if an alarm clock had gone off! I now have a very slimy, smelly fishing coat and I guess it’ll be some while before the white smears weather off. 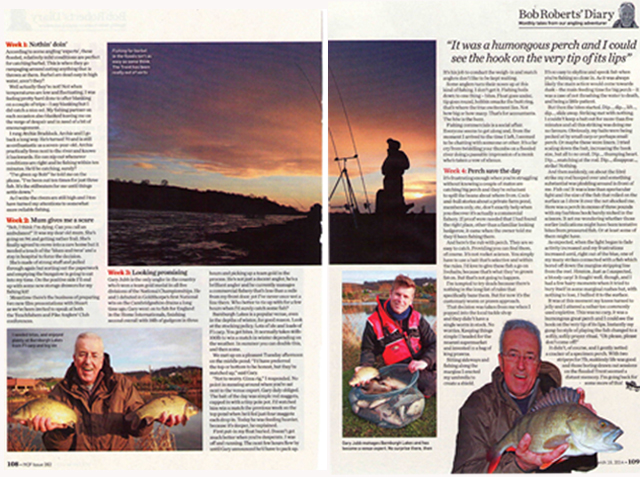 ‘Bob, I think I’m dying. Can you call me an ambulance!’ It was my dear old mum. She’s going on 94 and getting rather frail. Finally she’s agreed to move into a care home but it needed a bit of blues and twos and a stay in the hospital to force the decision. She’s made of strong stuff and pulled through again but sorting out the paperwork and emptying the bungalow is going to eat into my time. On the positive side I’ll end up with some new storage drawers for my fishing kit!

Meantime there’s the business of preparing two new film presentations with Stuart as we’ve been invited to speak at both the Tenchfishers and PAC conferences. 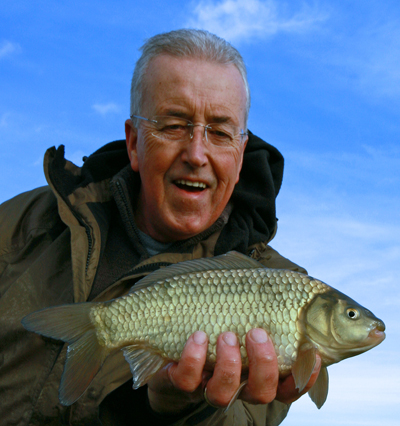 Gary Jubb is the only angler in the country who’s won a team gold medal in all five divisions of the National Championships. He and I debuted in Goldthorpe’s first National win on the Cambridgeshire drains a long time ago. Gary went on to fish for England in the Home Internationals, finishing second overall with 18lb of gudgeon in 3 hours and picking up a team gold in the process. He’s not just a decent angler, he’s a brilliant angler and he currently manages a commercial fishery that’s less than a mile from my front door yet I’ve never once wet a line there. Who better then to tie up with for a few hours fishing where surely I’d catch some fish.

Barnburgh Lakes is a popular venue even in the depths of winter for good reason. Look at the stocking policy. Lots of ide and loads of F1 carp. You get bites. It normally takes between 40 and a hundred pounds to win a match in winter depending on the weather. In summer you can double this and then some.

We met up on a pleasant Tuesday afternoon on the middle pond. ‘I’d have preferred the top or bottom to be honest, but they’re matched up.’ Said Gary.

‘Not to worry. Gizza rig!’ I responded. No point in messing around when you’re sat next to the venue expert. Gary duly obliged. The bait of the day was simple red maggots, cupped in with a tiny pole pot. I’d watched him win a match the previous week on the top pond when he’d fed just 4 maggots each drop in. Today he was feeding heavier. Why? Because it’s deeper, he explained.

First put in my float buried. Doesn’t get much better when you’re desperate. I was off and running. The next few hours flew by until Gary announced he’d have to pack up. It’s his job to conduct the weigh-in and match anglers don’t like to be kept waiting.

Some anglers turn their noses up at this kind of fishing. I don’t get it. Fishing boils down to one thing – bites. Float goes under, tip goes round, bobbin smacks the butt ring, that’s where the true excitement lies. Not how big or how many. That’s for accountants. The bite is the buzz.

Fishing commercials is a social affair. Everyone seems to get along and from the moment I arrived to the time I left I seemed to be chatting with someone or other. It’s a far cry from twiddling your thumbs on a flooded river doing a passable impression of a monk who’s taken a vow of silence.

It’s frustrating enough when you’re struggling without knowing a couple of mates are catching big perch and they’re reluctant to spill the beans about where from. Cock and bull stories about a private farm pond, members only, etc, don’t exactly help when you discover it’s actually a commercial fishery. If proof were needed that I had found the right place, other than a familiar looking hedgerow, it came when the owner told me they’d been fishing there.

And here’s the rub with perch. They are so easy to catch. Providing you can find them, of course. It’s not rocket science. You simply have need to use a bait that’s selective and within the rules. I’d love to give these fish a go on livebaits, because that’s what they’ve grown fat on, be in no doubt. But that’s not going to happen.

I’m tempted to try deads because there’s nothing in the long list of rules that specifically bans them. But for now it’s the customary worm or prawn approach.

That decision was taken from me when I popped into the local tackle shop and they didn’t have a single worm in stock. No worries. Keeping things simple I headed for the nearest supermarket and invested in a bag of king prawns. Great big juicy things.

Sitting sideways and fishing along the margins I erected my umbrella to create a shield. It’s so easy to skyline and spook fish when you’re fishing so close in. As it was always likely the main action would come towards dusk, the main feeding time for big perch, it was a case of not thrashing the water to death and being a little patient.

But then the bites started. Dip…, dip…, lift…, dip…, slide away. Striking met with nothing. I couldn’t keep a bait out for more than 5 minutes and all this striking was doing me no favours. Obviously my baits were being pecked at by small carp or perhaps small perch. Or maybe these were liners. I tried scaling down the bait, increasing the hook size, but all to no avail. Dip…, thumping heart. Dip…, snatching at the rod. Dip…, disappear…,strike! Nothing.

And then suddenly, on about the 53rd strike my rod hooped over and something substantial was  plodding around in front of me. Fish on! It was a less than spectacular fight and the size of the fish that rolled on the surface as I drew it over the net shocked me. Here was a perch in excess of 3 pounds with my barbless hook barely nicked in the scissors. It set me wondering whether those earlier indications might have been tentative bites from pressured fish. Or at least some of them might have.

As expected, when the light began to fade activity increased and my frustrations increased until right out of the blue one of my many strikes connected with a fish which bored off down the margins stripping line from the reel. Hmmm. Just as I suspected, a bloody carp! It fought well, though, and I had a few hairy moments when it tried to bury itself in some marginal rushes but with nothing to lose I bullied it to the surface.

It was at this moment my knees turned to jelly and I uttered a rather too commonly used expletive. This was no carp, it was a humongous great perch and I could see the hook on the very tip of its lips. Instantly my gung ho style of playing the fish changed to a softly, softly prayer ritual. ‘Oh please, please don’t come off!’

It didn’t, of course, and I gently netted a cracker of a specimen perch. With two stripeys for 7lbs, suddenly life was good and those boring drawn out sessions on the flooded Trent seemed a distant memory. I’m going back for some more of this!