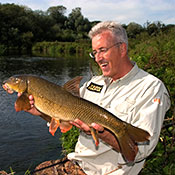 Now and then I get this irresistible urge to put the record straight. Okay, it might ruffle a few feathers but if I don’t do it who else will? Anglers are worse than washer women for repeating old wives tales. Read fishing articles for long enough and you’ll hear the same old dogmas repeated over and over. Stuff like using three silicone rubbers on a cane stick float in case one breaks. Tell me, when did you last have a decent quality silicone float rubber break? I’ll bet it’s close to never. Certainly I haven’t suffered from this mystery phenomenon and nor has anyone I know yet you’ll read about it again and again.

But this isn’t a stick float article so let’s change tack.
How often do you hear the mantra, ‘river’s up, better get out there guys because the barbel will be having it big time…’ Loads of times I suspect. It’s got to be true, hasn’t it, because everyone says so.

Well, it might be a case of horses for courses and I’m not going to say that I’ve not had some very good catches in flood conditions but what I will say is that I’ve had more reliable action on low, clear rivers.
For the past month the Trent has been carrying extra water. Up and down like a yo-yo. Depending on which reaches you fish the river has been anywhere between a couple of feet up and a couple of yards, not once getting back to what you might call normal level. During that time I’ve been out every weekend putting in time at Thrumpton, Sawley and East Stoke plus The Newark Dyke, while friends have been reporting in from Collingham. How’s it been? I’ll tell you – Rubbish!

In fact I’ve not had so much as a single bite in the last four trips and I refuse to buy the theory that I’m crap because I’ve actually only seen one barbel caught during this time. It fell to fellow DVSG member Martin Womble and was a scrawny, juvenile barbel.

Oh, I tell a lie. I plotted up in the middle of a line of anglers at Thrumpton, all blanking merrily when one angler showed a bit of ingenuity by catching a chub and a barbel from the Power Station’s hot water outlet. Ironic really because we’d already discussed the possibility and ruled it out because the water was supposed to be too warm.
Another theory up the spout!

Last Saturday, Matt Brown and I gave Sawley a go and suffered another predictable blank. Quite frankly I’m pretty certain I’m going to miss the next bite I get because I’ll have forgotten what to do! Scraping ice off the car windscreen before setting off came as a shock to the system. Arriving at the river the air temperature at ground level was 1.3 degrees whereas the water temperature was a whacking 9 degrees. The river was maybe three feet up, coloured and dropping slowly. There was a bit of rubbish coming down but not so much that you couldn’t cope comfortably. Five ounces of lead cast a couple of rod lengths out held easily.
Now ask any barbel expert and he’ll tell you that conditions don’t get much better. So why did we blank again and why did we not see anyone else catch?

I’m coming round to the belief that whilst barbel do feed in floodwater, catching them is all about being in exactly the right place at exactly the right time.
Let me clarify that. I believe that barbel can and do travel considerable distances when rivers are flooded and at certain times they will take the opportunity to feed hard. Trouble is, the feeding spells may be short and location is critical, sometimes being ten yards away from a group of fish might as well be ten miles. That can be ten yards above, below, inside or outside of their dining table.
Even when you are fishing in a key feeding spot the fish can be disinclined to feed.

It is unusual for a river to remain consistently high for as long as the Trent has in past weeks. Okay, they might have gone on a binge as the first flush ran through but high water has become the norm, not the exception. The urge to feed ravenously has passed and now it’s a case of feeding when they need to. A satiated fish doesn’t need to feed, does it? Fish that feed heavily one day might ignore anything you put in front of them the next.

For an example of this I’ll cite Adam Roberts. Adam’s no relation to me though he is a member of the Don Valley Specimen Group and he certainly catches his share of fish. Happy with having caught the biggest common carp to date from the A1 pits this autumn he’s switched his attention to catching one of the Tidal Trent’s big barbel. In spite of what the press reports might have you think these big barbel aren’t exactly thick on the ground. In fact I’d go so far as to hazard a guess that there are more barbel over 15lb in the two miles of Adam’s Mill than there are in the first ten miles of the Trent below Collingham Weir. The Trent fish appear to be caught more often simply because they are targeted by a significantly greater number of anglers. Trouble is they have a far bigger haystack in which to hide and the chances are that a fish on the move will have to run the gauntlet of a great many traps before it presents you with a chance. Ouse fish live in comparative seclusion but repeat captures are a common feature.

Anyway, young Adam’s doing his time, clocking up the rod hours and, as a single man, he has fewer restrictions on his time than many of us. Consequently you’ll regularly find him doing 48-hour sessions even in the depths of winter.

Unlike yours truly, his determination has begun to pay off. Over the past two weekends he’s enjoyed veritable purple patches making multiple catches on two occasions. On the Friday before Matt and I fished at Sawley on Saturday the skies were overcast and persistent rain fell. Nothing torrential or dramatic, just steady rain that had little effect other than to keep the river topped up. Adam had a bonanza catching barbel after barbel, many went eight or 9lbs, one was a tiddler of 6lb but the star of the show was an eleven plus and significantly, a great many of these fish came during daylight. Hat’s off to the guy. He’s out there in diabolical conditions, fishing alone, with a determination to succeed. I’m pleased that his tenacity is paying off. On Friday night he would probably have continued catching for a while longer but at midnight he reeled in the rods for some much needed rest. Continually getting out of a warm sleeping bag, getting cold and soaking wet with each capture must begin to wear thin after a while.

Come dawn the skies had cleared and despite the river remaining high and coloured with a mouth-watering temperature some eight degrees higher than the air he struggled like we did. The fish he caught on Friday were as fat as pigs but the feeding spell was over. He’d caught the boat, we’d missed it.
A week earlier Adam was again on the river for a couple of nights and the story was quite similar. He caught well on Friday night but struggled on Saturday. When Matt and I packed in fishing at Thrumpton I drove Matt across to Collingham and dropped him off so he could fish the night with Adam. One small fish was all they caught in the sort of conditions many experts would have you believe were perfect.

The week before that, despite high and coloured water, was less productive. Adam rang to say that a lot of rubbish was coming down but he was managing to hold at fairly close range with ELEVEN ounces of lead. Alas he had both rods wiped out by a passing tree sometime during Friday night and called it a night. Fortunately he managed to rescue his tripod and both rods.
Now let’s recap. Apart from a couple of feeding frenzies to the rods of one angler it has been a gloriously unproductive period spanning a whole month. So explain to me again, if high and coloured water is the perfect time to fish for barbel how come we have done so badly?

Let’s analyse our failures. Are we fishing in the wrong areas? Well, the places we fished have produced barbel consistently for many years and I would definitely expect to catch there at normal levels.
Circumstances, yes it’s the party season, have dictated that I could only fish in daylight – like many readers of the magazine. Would fishing into darkness have made a difference? Probably.

What about baits? Well, for much of the time we have fished single, high attract baits. It’s not easy to lay down a tight bed of bait on a flooded River Trent. Matt and I have had numerous discussions but I believe stuff like hemp and pellets will get swept away. If, as every expert has us believe, the fish are actively seeking food, a large smelly bait makes sense. It also allows you to search a swim and to stay mobile. My preference in floodwater is to use a flavoured meat bait which can be in the form of a huge lump or several lumps threaded up the line. The second rod offers a single pellet wrapped in a walnut sized knob of high protein paste, the pellet being used only to mould the paste around as opposed to providing a food source.
I carry other baits and the photos show Matt and Martin’s selection as well as mine. Pretty impressive choice, eh?

Thing is, the one bait that has stood out head and shoulders above the others during this period of spasmodic captures is a big, fat, juicy lobworm which is exactly what I would have used on a flooded Trent 20 years ago in my match fishing days. Nothing much changes, does it?
You know, if I’d been fishing alone, concentrating on one area, sticking with one type of bait, I might have written this saga off as being down to bad choices on my part. Considering how four good anglers have performed, added to the dismal returns of other anglers fishing nearby, I don’t believe I’ve been doing a great deal wrong, tactically. I don’t think anyone else has a magic bait or magic method that would have produced different results, either.

So, am I alone in thinking that floodwater feeding frenzies are pretty much a fallacy? That all you have to do when the river rises is to turn up and fill your boots? Or is it just a problem on big rivers?
I’m not suggesting barbel don’t respond to a rising river, they obviously do, but timing appears to be crucial. Too early and the volume of rubbish coming down prevents you from fishing effectively, too late and the fish are as full as a Dingle on Christmas afternoon, no room even for a measly wafer thin mint.
One thing’s for sure. Flood water fishing isn’t as easy or the nailed-on certainty that some would have you believe.