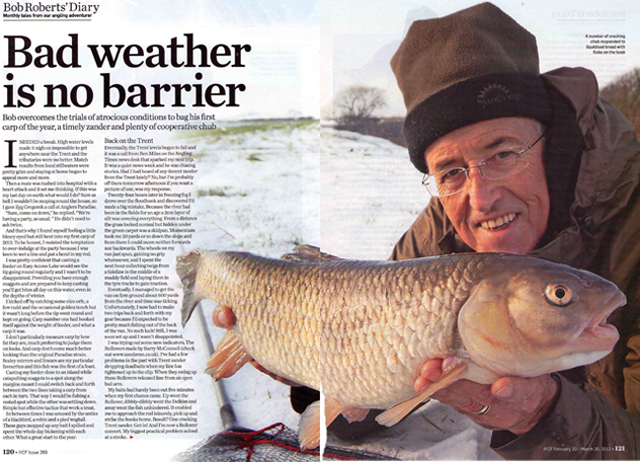 I needed a break. High water levels made it nigh on impossible to get near the Trent and the tributaries were no better. Match results from local stillwaters were pretty grim and staying at home began to appeal more and more. Then a mate was rushed into hospital with a heart attack and it set me to thinking, if this was my last day on earth what would I do? Sure as hell I wouldn’t be moping round the house, so I gave Zyg a call at Anglers Paradise. ‘Sure, come on down!’ He replied, ‘We’re having a party, as usual, on New Year’s Eve.’ He didn’t have to ask twice. And that’s why I found myself feeling a little bleary eyed on New Year’s Day but still bent into my first carp of 2013. To be honest I resisted the temptation to over-indulge at the party because I was really keen to wet a line and put a bend in my rod. I was pretty confident that casting a feeder out on Easy Access Lake would see the tip going round regularly and I wasn’t to be disappointed. Providing you have enough maggots and prepared to keep casting you’ll get bites all day on this lake, even in the depths of winter. I kicked off catching some nice orfe, a few rudd and the occasional golden tench but it wasn’t long before the tip went round and kept on going. Carp number one had hooked itself against the feeder and what a carp it was. I don’t particularly measure carp by how fat they are, much preferring to judge them on looks, and carp don’t come much better looking than the original Paradise strain. Scaly mirrors and linears are my particular favourites and this fish was the first of a feast. 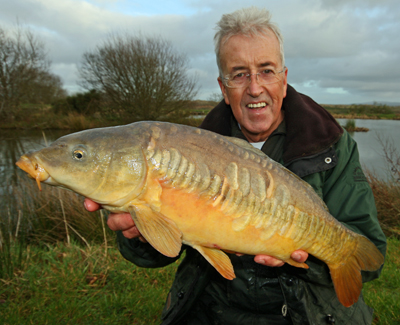 Casting my feeder close to an island while catapulting maggots to a spot along the margins meant I could switch back and forth between the two lines taking a carp from each in turn. That way I would be fishing a rested spot while the other was settling down. Simple but effective tactics that work a treat. In between times I was amused by the antics of a blackbird, a robin and a pied wagtail. These guys mopped up any bait I spilled and spent the whole day bickering with each other. By mid-afternoon I’d had my fill. 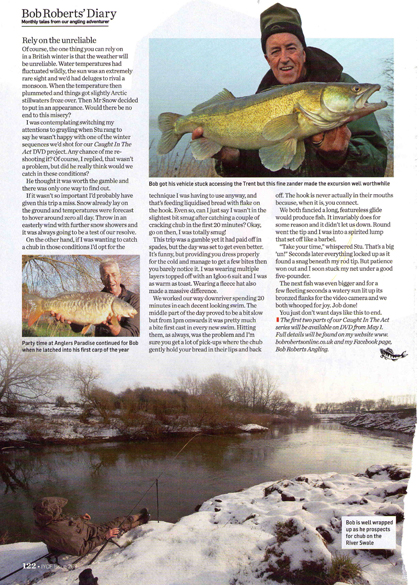 Eventually the Trent levels began to fall and it was a call from Ben Miles on the Angling Times newsdesk that sparked my next trip. It was a quiet news week and he was chasing stories. Had I had heard of any decent zander from the Trent lately? No, but I’m probably off there tomorrow afternoon if you want a picture of one, was my response. Twenty four hours later in freezing fog I drove over the floodbank and discovered I’d made a big mistake. Because the river had been in the fields for an age a 2cm layer of silt was covering everything. From a distance the grass looked exactly normal but hidden under the green carpet was a skidpan. Momentum took me 20 yards or so down the slope and from there I could move neither forwards nor backwards. The wheels on my van just spun gaining no grip whatsoever and I spent the next hour collecting twigs from a tideline in the middle of a muddy field and laying them in the tyre tracks as I attempted to escape. Eventually I managed to get the van on firm ground about 600 yards from the river and time was ticking. Unfortunately I now had to make 2 trips back and forth with my gear because I’d expected to be pretty much fishing out of the back of the van. No such luck! Still, I was soon set up and I wasn’t to be disappointed. 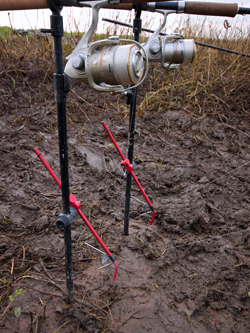 I was trying out some new indicators, The Rollovers made by Barry McConnell (check out his web site – zandavan). I’ve had a few problems in the past with Trent zander dropping deadbaits when my line has tightened up to the clip. These Rollovers eradicate the clip and as soon as they swing upwards line is released from an open bail arm. My baits had barely been out 5 minutes when my first chance came. Up went the Rollover, dibbly-dibbly went the Delkim and away went the fish unhindered. It enabled me to approach the road leisurely, pick up and strike the hooks home. Result one cracking Trent zander. Get in! And I’m now a Rollover convert. My biggest practical problem solved at a stroke. 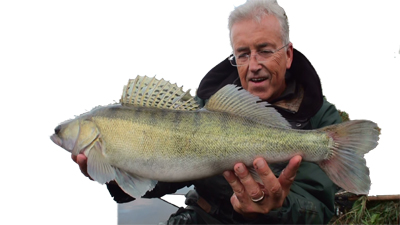 Of course, the one thing you can rely on in a British winter is that the weather will be unreliable. In the past few weeks the water temperatures had fluctuated wildly. The sun was an extremely rare sight and we’d had deluges to rival a monsoon. Of course when the temperature then plummeted and things got slightly Arctic stillwaters everywhere froze over. Then Mr Snow decided to put in an appearance. Would there be no end to this misery? I was contemplating switching my attentions to grayling when Stu rang to say he wasn’t happy with one of the winter sequences we’d shot for our Caught In The Act DVD project. Any chance of me re-shooting it? He asked. Of course, I said, that wasn’t a problem, but did he really think would we catch in these conditions? He thought it was worth the gamble and there’s only one way to find out. To be honest if it wasn’t so important I’d probably have given this trip a miss. Snow already lay on the ground and temperatures were forecast to hover around zero all day. Throw in an easterly wind with further snow showers falling and it was always going to be a test of our resolve. On the other hand, if I was wanting to catch a chub in those conditions I’d opt for the technique I was having to use anyway and that’s feeding liquidised bread with flake on the hook. Even so, can I just say I wasn’t in the slightest bit smug after catching a couple of cracking chub in the first 20 minutes? Okay, go on then, I was totally smug! 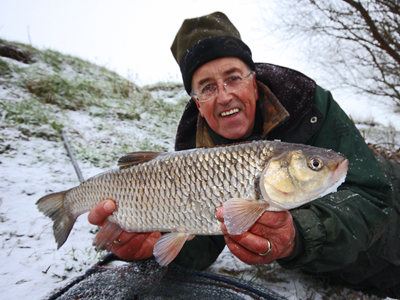 This trip was a gamble yet it had paid off in spades, but the day was set to get even better. It’s funny you know but providing you dress properly for the cold and manage to get a few bites then you barely notice it. I was wearing multiple layers topped off with an Igloo 6 suit and I was as warm as toast. Wearing a fleece hat also makes a massive difference. We worked our way downriver spending 20 minutes in each decent looking swim. The middle part of the day proved to be a bit slow but from 1pm onwards it was pretty much a bite first cast in every new swim. Hitting them, as always, is the problem and I’m sure you get a lot of pick-ups where the chub gently hold your bread in their lips and back off. The hook is never actually in their mouths because when it is you connect. We both fancied a long, featureless glide would produce a fish. It invariable does for some reason and it didn’t let us down. Round went the tip and I was into a spirited lump that set off like a barbel. ‘Take your time,’ Whispered Stu, That’s a big un!’ Seconds later everything locked up as it found a snag beneath my rod tip but patience won out and I soon stuck my net under a good 5-pounder. The next fish was even bigger and for a few fleeting seconds a watery sun lit up its bronzed flanks for the video camera and we both whooped for joy. Job done! You just don’t want days like this to end. 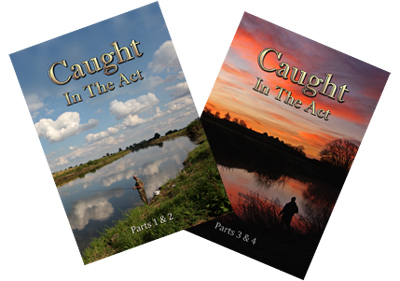 The first two parts of our Caught In The Act series will be available on DVD from 1st May. Full details will be found on my web site (www.bobrobertsonline.co.uk) and my Facebook page (Bob Roberts Angling).