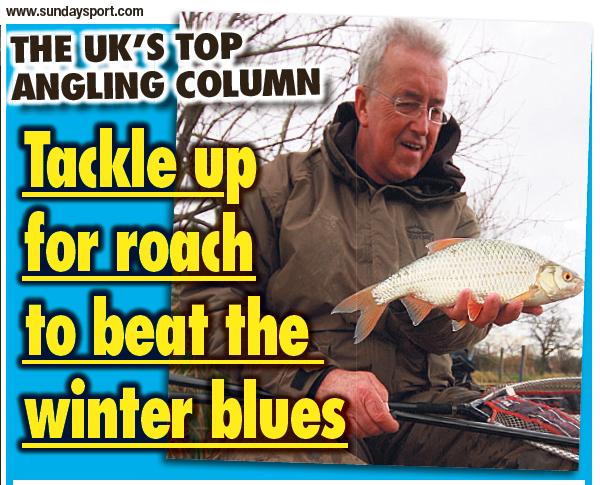 It’s hard to credit how I can wake up to a monsoon one day and snow the next but if it’s puzzling to me just imagine how cold blooded creatures like fish are feeling. Water temperature plays a massive part in fishing dictating where the fish will be and if they feed. Fish metabolism slows down when temperatures fall and that means our target species use less energy while their digestive system slows to a snail’s pace. They can go days, weeks even, without feeding. The bigger the fish the bigger the energy reserve it is likely to have stored up and the less likely it is to feed. Hence we catch fewer carp, tench and bream in the winter.

River fish use energy to fight the flow so they are more inclined to feed than their stillwater cousins. Unfortunately it can be dangerous to even go near the rivers right now and even when it’s not flood water will be the kiss of death if surface water run-off holds high levels of chemicals and pollutants. These can be anything from oil and fuel that leaks onto the roads, fertilisers on the fields to the outpourings from combined sewage overflows. That’s right, our wonderful privatised water companies automatically pump raw sewage into the rivers when levels are high. In 2012 alone, 57 combined sewer overflows discharged 39 million tonnes of sewage into the River Thames.

Is there any wonder that many keen anglers hang up their gear and wait until the weather improves? But don’t get too despondent, despite my doom and gloom introduction there’s still some fantastic fishing to be had if you go looking in the right places.

Heavily stocked commercial fisheries are the angling equivalent of Marmite. You love them or hate them. Personally I’m not a big fan in summer when it’s frankly too easy to catch fish. If the challenge diminishes I tend to get bored very quickly but in the winter it’s a very different story. You have to think a little more and work harder.

Although carp are the main attraction of commercials I tend to concentrate on a different species, the roach. Maybe it’s because I grew up in an era when Yorkshire carp were rarer than big cat sightings in Leicestershire. Or maybe it’s because roach have been mullered so ruthlessly by cormorants they’ve all but disappeared from a lot of natural waterways.

Most owners of commercial fisheries tend to have a policy of scaring away cormorants. Indeed my old mate Billy Makin who created the biggest commercial fishery in the UK of the time operated a complete no fly policy to protect his valuable stocks. It might have got him into hot water with the law on occasion but as he used to put it, ‘The law allows me to scare them away. Unfortunately I sometimes scare them to death!’

It’s a sad affair and the latest relaxation on shooting license bureaucracy will only help to a point. Inland cormorant numbers have multiplied phenomenally in the UK and until water owners get the same rights as farmers who can protect their livestock when threatened, or these non-native birds are put on the general shooting license as pigeons, crows and magpies are, fishery owners will inevitable take whatever action is necessary to protect their livelihood. Meanwhile anglers must look to commercial fisheries for the best winter roach sport.

This week I spent a pleasant afternoon at Sykehouse Fisheries which lies around 7 miles north of Doncaster. All the lakes on site offer decent roach fishing, but my personal favourite is the Stock Pond. Don’t be fooled by the name. The Stock Pond covers is a well established lake of a good few acres which runs to 17 feet deep. That’s a lot of water to search but fortunately the roach can be tempted to feed next to the marginal rushes. I actually sit right at the back of the platform I’m fishing from so as not to skyline the fish or cast shadows on the water. Both are big mistakes to make when fish are in a shy mood, which they mostly are in cold weather.

The best way to present a bait is with a pole and I generally choose a 4 to 6 elastic rating. When it’s cold you can safely use finer lines, especially when fishing close in as the bigger carp tend to hold out in deeper water. That suits me down to the ground as carp will trash light tackle. Indeed they are an absolute nuisance if you hook one on this gear.

You’ll catch lots of roach using maggots but I’m always looking to pick out the bigger specimens if I can and there’s no finer combination in springtime than caster and hemp. It’s like sugar and spice, strawberries and cream, apple pie and custard. Casters and hemp are the perfect harmony but don’t get carried away with your feeding. Less is often more. Feed too much and you’ll fill your swim with tiddlers.

Sometimes I’ll feed maggots quite heavily to one side of my swim while trickling in much smaller amounts of hemp and caster on the opposite side. The idea is to get all the smaller fish competing like mad for maggots which allows me to pick out the bigger specimens on caster. After all, you wouldn’t catch me eating burgers in a restaurant that was full of boisterous kids if I could go next door where it’s quiet and be served a fillet steak.

There’s no magic bullet though. You have to put up with your share of small fish but get it right and you can sort out a few better specimens like the one I’m holding in the picture. Make the most of it though because this window will close as soon as the temperatures rise. When that happens the carp will move into the margins and a complete change of tactics will be required.

Currently running a special two-for-one deal until the end of April these two former sand and gravel pits, Warren Pool and Lambsdown Lake, cover a total of 17 acres. The current match record stands at 265lb although there’s no shortage of quality specimens knocking about including crucian carp to 3lb 8oz, tench to over 9lb, roach to 3lb 3oz and carp to 32lb 2oz.