Hey, where did summer go? Suddenly it’s raining every day and the rivers are coming over their banks. There’s nothing quite like a warm flush for switching barbel on but unfortunately a proper flood at this time of year brings down all manner of rubbish and masses of weed so fishing can be a bit tricky.

It’s pretty frustrating because I was due to shoot a couple of features with Improve Your Coarse Fishing this week on Midlands rivers – both on aspects of float fishing. Oh well, maybe next week. We already have a spectacular river feature in the bag but we were rather hoping to hold that back for next Summer but we may be forced to use it now.

Work on the DVD project continues and I can safely say that Volume One of Barbel Days And Ways is in the can – job done. It’s filmed, edited, mixed, matched, hashed and re-hashed until we’re sick of the sight of it if truth be told. The music has been added, all the little voice-overs and we ain’t doing another thing to it. It’s a wrap!

I was the studio guest on Sky TV’s Tight Lines last week and they kindly showed a few clips. Boy, did that light up the Internet forums! The show went out on Friday evening and by Tuesday lunchtime the threads on Fishing Magic and Barbel Fishing World alone had clocked up over 4,500 hits between them and by the end of the week we’d sailed past 8,000 views. How incredible is that?

Not as incredible as the fact that most posters were being very positive and complimentary. Of course it wouldn’t be the Internet if there weren’t a few jaundiced comments but if I’m honest I expected far more negativity. Clearly the show went down really well. If you’re interested the links to the threads are:

If you’d like to learn more about our Barbel Days And Ways and how to get hold of a copy you should check out the DVD section of this site by clicking:

Top Of The World!

Did you see the England result? No, not the football, the Men’s Freshwater Angling World Championships! What an incredible performance on such a patchy venue. Drennan Team England blitzed the team event and Will Raison did what everyone has expected him to do all along and come home with the individual gold. It’s been a weight on Will’s shoulders for a while despite his tender years. Since the day he made the team folk have been saying that it’s only a matter of time before he wins it. That’s a pretty big burden but did you realise he’s only fished four less World Championships than Alan Scotthorne?

Then again, it doesn’t exactly help when these two very special talents have peaked around the same time. And pity the ‘old’ man of the squad, Stevie Gardner. I was rather hoping he would win this year because all anglers have to move over at some point, ask Bob Nudd, ask Tom Pickering and Denis White. Steve is widely regarded by his peers as the best angler never to win the individual event. He’s been second before and this year he added a bronze.

With Willy Wheeler snatching silver for Ireland it was a home nations grand slam. Mind you, England’s media won’t be celebrating, will they? Had it been ping pong or origami we’d have never heard the last of it. Come the time for Sports Personality of the Year you can bet your bottom dollar they’ll be pandering to someone who excelled at running round in a circle, swimming in a straight line or taking the most drugs they could inject without detection. This year we ruled the world in angling winning at every level we competed in from the juniors to the veterans via the ladies and the gents, each staged in different countries. It’s an unprecedented achievement and will probably never be repeated again by Team England or any other country for that matter.

Right now I’m in the throes of preparing for my next fishing adventure. In a few weeks I’ll be heading off to India again, this time I’m going back to the very first river I fished up there, the magnificent MahaKali. Imagine a river that’s wider than the Trent and about four times faster. In fact it could be worse than that because we’re hoping to arrive as the monsoon recedes.

Last time we went there it was springtime and we were hit by snow melt. Over here we suffer from snow in the winter. Over there, because the Kali is glacier fed, a rapid rise in temperature causes the snow and ice higher up in the Himalayas to melt, the river to colour up and the water temperature to plummet. 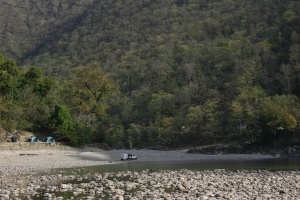 That won’t be a problem this time but high waters could prevent us from fishing altogether. It will bring further logistical problems in that we’re aiming to white water raft our way downstream and fish remote areas that seldom see an angler but it is quite possible that the rapids will be unpassable. Then we will be stuck between a rock and a hard place!

Our journey is quite tortuous. Just getting to a London airport by car is bad enough but from there we fly to Delhi, pick up a taxi and then drive north for God knows how many hours on some pretty poor roads until we reach the town of Kathgodam in the Himalayan foothills. We have a room booked in what is laughingly called a hotel but you wouldn’t impress a wife or girlfriend if you took them there.

But it’s somewhere to freshen up and grab a few hours kip because we’ll have been on the road for well over 24 hours by then. The next morning we’ll be picked up by jeep and the hair-raising leg of the journey begins. The path to Pancheshwar is definitely not for the feint hearted. Winding, narrow mountain roads, sheer drops of a thousand feet, all to be shared with lorries, cars and whole families on mopeds that come at you from any and every angle.

Last time we only witnessed the aftermath of one head-on collision. Let’s hope if there’s another we’re not directly involved. Rolling down the side of a mountain doesn’t bear thinking about and even in the event of a minor catastrophe you really don’t want to visit a hospital if you can possibly avoid it although we did end up taking a member of our group to one last time and that’s an experience we could have all done without.

You know, the more I think about this trip the less I’m looking forward to it. The fishing last time was incredibly hard and the biggest fish we caught between three of us was a fish generously estimated to weigh 8lbs. But if it was easy, we probably wouldn’t go there. This is hardcore fishing for a species that is getting rarer by the day. These aren’t the hump-backed mahseer you target on the Cauvery River in Southern India, these are the wild, sleek, sports car versions, the king of all mahseer, barbus tor. That’s right, we’re talking about a member of the barbel family, except it fights like no barbel you’ll ever hook in the UK. 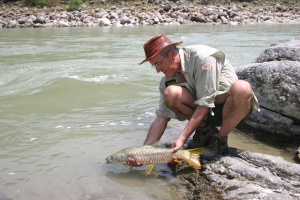 I hooked one on the Ganges that fought for an hour and I still lost it. It made searing runs of up to a hundred yards straight across a current that would sweep you away. It came to the bank three times and still it escaped.

We’re hoping to catch a twenty pounder on this trip. If we’re really lucky we might get a thirty or even a forty, but if we dare allow ourselves to dream, a fish of 60lb could be out there with one of our names written on it. How we’ll land a fish like that I have no idea because the fight would be something else completely and the terrain is so incredibly rugged. But we’ll see. 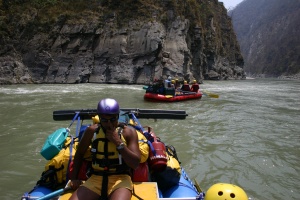 Before the rains hit, Matt Brown and I went down to have a look at small river in Nottinghamshire. It runs through a public park, the water is quite shallow, crystal clear and there’s very little in the way of cover. There is one rather substantial bush on the far bank and beneath this lives a shoal of barbel. Quite how compelling Elips pellets are when it comes to drawing barbel out of cover was brought home to us with a sledgehammer that evening.

Now bear in mind that there’s a public path right alongside this river, well, stream would be a more apt description, and there are people walking along the skyline regularly causing the fish to be quite shy. The local kids are always trying to catch them so they know what anglers, tackle and bait is. Anyway, I waded into the water some 25 yards upstream of the bush and began to drip feed pellets. Take a look at the photo and see just how close those barbel came to me. 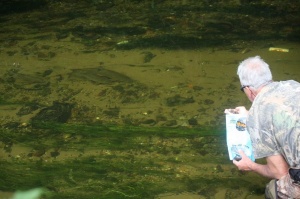 What was amazing was how quickly they responded. Within minutes of that first bunch of pellets being introduced the fish came out from the cover and began milling around almost daring each other to swim up to the feed.

Later I took a couple of fish on rolling meat, one from here and another from beneath a busy road bridge. They weren’t the biggest barbel in the world but great fun in the circumstances. Sometimes we forget that angling isn’t just about size, it’s about having fun and I had plenty of that with these fish.