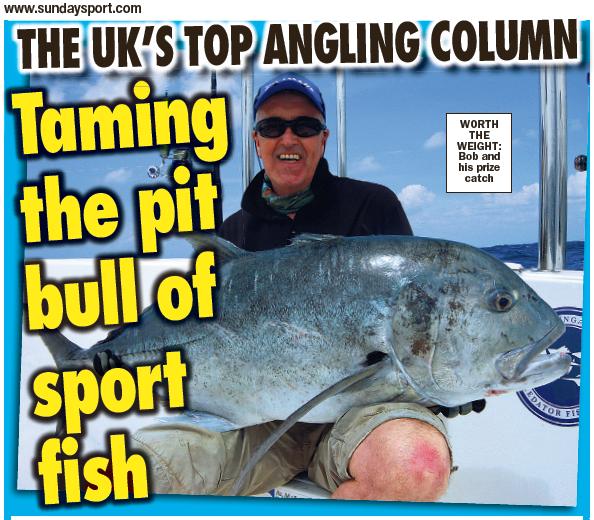 The prow of the boat lurches skywards. For a second it seems we have defied gravity, then reality kicks in. What goes up surely has to come down and it does so with a bone juddering slam dunk. Feet planted at shoulder width, knees slightly bent, knuckles gripping tight on whatever is to hand we brace ourselves for the seventh wave and the wall of water that will completely drench us a split second later. This doesn’t feel much like fun.

Welcome to the Indian Ocean.

Here in the UK we’ve had rain, rain and more rain whereas the Sri Lankan coastline has been battered by strong winds for over two months and that is bad news for sport fishermen. Strong tides, prevailing currents and strengthening winds add up to near impossible conditions.

We’re aiming to reach Maha Ravana, the Great Basses Reef Lighthouse which lies 13 Kilometres off the coast of Yala National Park. This is where you’ll find some of the best GT fishing in the world. GT is short for giant trevally, the pit bull of sport fish. Pound for pound maybe the hardest fighting fish in the seas and until recently they were deemed uncatchable on regular tackle. GTs have a reputation for smashing rods, smoking reels and shredding the strongest lines on the rock formations around which they invariably hunt.

Modern tackle developments have given us a chance but it’s a slim chance in these conditions. Imagine trying to catch surface carp from an exposed reservoir in a gale. That’s what we’re up against.

What makes GT fishing so incredibly absorbing is that they are best caught on surface lures called poppers. The ones we’re using are almost a foot long and weigh around half a pound. That’s a big chunk of hardware to be hurling from a tossing boat. The lures are retrieved in short fast jerks and the concave lure face forces a plume of water to erupt loudly.

Sounds easy but get your timing wrong in the swells and you’ll end up on your backside. Get it right and you’ll just need the services of a decent masseur when you stop. Fishing seldom comes more physically demanding and it’s not helped by temperatures in the mid-thirties and high humidity.

But don’t let me sound like I’m complaining. I’m loving every second. This is what I dream of when things are not going so well on the riverbank.

Darran Davis runs two Game Fishing Asia boats out of Kirinda on the South Coast of Sri Lanka. He didn’t have to say much when we arrived, it was clear from the look on his face that the fishing was going to be tough. ‘This wind has been blowing for months. I’ve never known anything like it.’ He tells us. ‘And the forecast is not good. The best thing we can do is get out as early as we can each morning and return as the wind strengthens.’

No-one wants to hear that but this is fishing, not catching. There are no guarantees. Climate change isn’t new, it has been happening for millions of years. Better get used to it and make the most of what opportunities we have.

Rising an hour before dawn we eat breakfast and head down to the harbour. Even at this ungodly hour the sea is rough. Despite two four litre engines thrusting us towards the fishing marks it takes a good hour to cover the short distance. To push the boat any faster would risk life and limb. It’s only when our guide Eric kills the engines we truly appreciate how wild the swells are. Just hanging on to that breakfast will be considered a result!

Eric and Nico scan the water constantly looking for signs of bait fish on the surface. ‘To your right, four-o’-clock!’ Nico shouts. ‘About 60 metres.’ I can’t see what he’s on about but launch my lure in that direction. Feeding GTs force small fish to the surface but in these conditions it requires a keen eye to spot the disturbances. You have to be quick and accurate. Not easy when the boat is rocking while being swept along by wind and current at around 12 knots.  It’s crazy.

The odds are stacked against me but suddenly there’s an explosion of spray as something attacks my lure. It misses but turns on a sixpence and hammers straight into the lure again. This all happens in the blink of an eye but I manage to control my reactions and strike – hard. I then wind down and strike again. Setting the hook in a GT is far from easy but judging by the way the rod is almost wrenched from my grip and my knees are slammed against the gunnels I’ve clearly managed to do the hard bit. I hang on grimly as 120lb braid melts from the reel. The drag had been screwed down so tight I couldn’t budge the spool without cutting my fingers. This fish laughed at such tension.

‘Reel Bob! Keep the pressure on!’

Everyone is barking instructions at me but it ain’t easy. I’ve bent my knees and leaned back to use my whole body weight but turning the reel handle is incredibly difficult. Slowly I seem to be gaining the upper hand.

I can now see her in the clear water. This is the moment when you don’t want the hooks to slip. It’s dangerous. The popper lure is armed with large heavy duty trebles and would shoot towards us as if fired from a gun.

At last, my prize is netted and hauled aboard. It’s my biggest GT to date and my arms are shaking. A few quick snaps and she’s quickly returned to the sea. This is strictly catch and release. I can barely speak. I have achieved my dream fish on day one.

Sadly it proves to be my only big GT of the trip but I’m not complaining. The weather takes a turn for the worse reducing us to a couple of days light jigging before eventually heading inland to fish for barramundi.

Perhaps that’s a tale for another day.

Described as undiluted specimen fishing this 5 acre complex offers massive pike and carp to more than 40lbs, specimen tench and much more. Accomodation is available and the owners invite you to try what they call divorce free fishing holidays in a lakeside lodge with its own fishing pool.