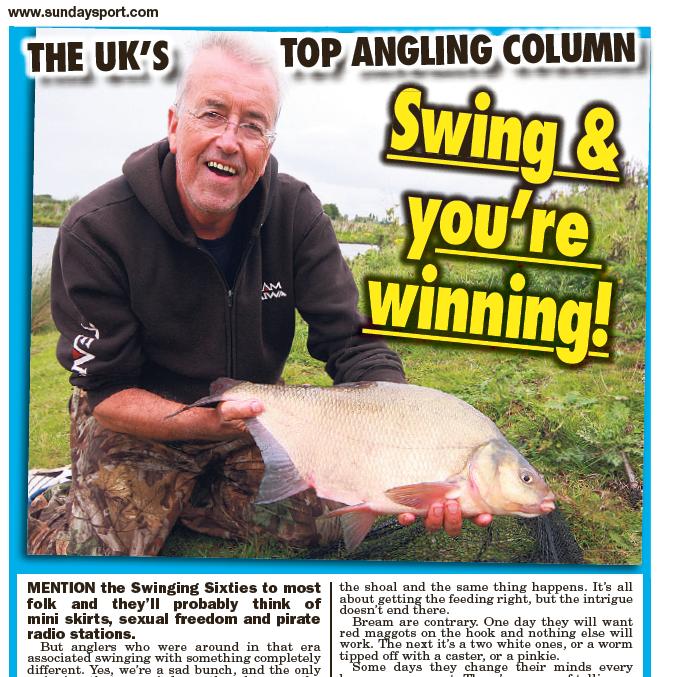 Mention the Swinging Sixties to most folk and they’ll conjure up images of miniskirts, sexual freedom and pirate radio stations.  Anglers who were around in that era associated swinging with something completely different. Yes, we’re a sad bunch and the only swinging that occupied our thoughts was the swing tip – a development that was to revolutionise match fishing in particular and become the greatest method ever invented for catching bream.

Anglers like Freddie Foster and Ivan Marks re-wrote the headlines and became household names by winning fortunes on the match scene, often in competitions where upwards of a thousand anglers took part. Match fishing was massive in those days, make no mistake and big money was at stake.

The swing tip was invented by Jack Clayton. Ironically he was trying to invent the quivertip by rubbing down whalebone and nylon to create a rod tip that was sensitive enough to register bites from shy biting fish. Unfortunately he kept getting it wrong but the resulting failures turned out to be perfect.

In those days there were huge shoals of bream in the Fenland waterways, in the Witham, Nene and Welland. The carp puddles we know today hadn’t even been thought of, indeed carp were a novel species, regarded by many as virtually uncatchable. So it was that bream were the number one popular species with match anglers. They might fight poorly for their size, they might be slimy but it was possible to build a big weight in a short time if your tactics were spot on. And this is where the real intrigue of bream fishing grabbed everyone’s attention.

Imagine bream as the sheep of the waterway and you won’t go far wrong. They’re pretty docile creatures that act in unison. If one wanders off, they all wander off. If one starts to feed, chances are they all will. They graze over an area, slowly on the move. The anglers’ job is to lay down some bait in their path and hope to hold their attention for a while, but here’s where the tricky bit comes in to play.

If you don’t introduce enough feed they will mop up everything and pass through to the next swim. Too much and they’ll never find the hook bait. Try and introduce feed over their heads and the chances are they’ll spook off and be gone. Lose a fish in the shoal and the same thing happens. It’s all about getting the feeding right, but the intrigue doesn’t end there.

Bream are contrary. One day they will want to red maggots on the hook and nothing else will work. The next it’s a two white ones, or a worm tipped off with a caster, or a pinkie. Some days they change their minds every hour, or every cast. There’s no way of telling so the angler has to keep experimenting till he drops on the winning combination.

The process of deduction is what makes bream fishing so interesting, not the actual catching. Truth is, despite their slab sided proportions, bream tend to fight like wet paper bags most of the time, particularly in lakes and slow moving waters. Fishing for them is a bit of a mind set. It’s chess on water and that appeals to me in a perverse sort of way. Each summer I will spend a little time chasing bream and would like to look at two different ways to approach them.

When targeting regular sized bream there is no better way than to employ quivertip tactics. Quivertip rods vary greatly, from fairly short lightweight models for close range work through to longer, stiffer, long-distance models that will throw a feeder a long way. Picking the right rod helps but more important is picking the right tip. These are generally interchangeable and range from ½ ounce ratings up to 4oz. The heavier ones are mainly for fast flowing rivers with the lightest ones perfect for stillwaters. In between there are variations to cope with different flows and undertows.

The most popular set-up at the business end involves tying a paternoster. The feeder is attached to the end of the main line with the hook tied to a lighter length of line that might be anything from 6 inches to 6 feet long.

Accuracy matters and providing you are not going to be pestered by carp it pays to use the line clip on the reel’s spool so the distance you cast each time is exactly the same.

Most likely you will be using an open ended swimfeeder which will carry groundbait and hookbait samples. Unlike most other feeder methods it’s not just a case of casting and waiting for a bite. Twitching the feeder back towards you a few inches at a time often provokes a bite. You see, bream have a habit of swimming up to a bait and not eating it. They will appear to ignore it but just like a cat being teased by a ball of wool, the moment it moves they pounce.

Twitching the feeder in this way also empties it and places the hook bait closer to the pile of free offerings.

Bites are strange, too. One day the tip will pull round and keep going until your rod is pulled off the rest. Other days it will gently pull forward no more than an inch, or it will drop back slightly as the feeder is dislodged. You will also experience ‘line bites’. These aren’t bites at all. They are caused when a deep bodied bream brushes against the line and causes your tip to move. Be careful when this happens because striking at these false bites can spook the shoal. If it happens the best thing you can do is offer a worm bait, sit back and fold your arms. Wait for a proper bite and you’ll know when this happens because the tip will pull round and stay round. Bream tend to hang on to a worm as if their life depends on it.

Catch one shoal sized bream and the chances are, if you don’t make a mistake, you will catch several. Maybe even fill your net.

Verging the Lincolnshire Wolds, Old Mill comprises 3 carp lakes on a 50 acre site with toilets, showers and a shop. Willow Lake is predominantly a ‘runs’ water with fish averaging sixteen to 18lb and the chance of a twenty. Birch Lake is where you should head if you are hoping for something bigger. It contains 80 hand-picked carp including ten specimens over the 30lb mark. Advance booking is certainly advised.